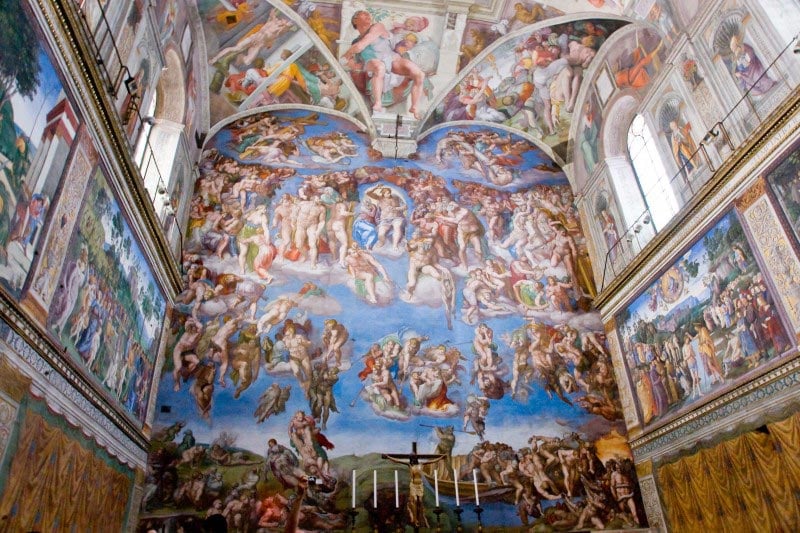 The Sistine Chapel – known for its architecture, frescoes and paintings.

The Sistine Chapel is one of the most popular places to visit in the Vatican City. The chapel is known for its architecture, frescoes and paintings as well known Renaissance artists such as Michelangelo and Raphael Sanzio painted its inside walls. The exterior of the chapel, on the other hand is plain since during the time period, which it was built in, doorways outside didn’t hold much of significance and the chapel was supposed to be accessed from inside the Papal Palace.

The ceiling of the Sistine Chapel is a huge work in terms of subject matter and size. The incredible amount of attention to detail in the work done is fascinating. Before Michelangelo was asked to repaint the area, the ceiling looked like a blue sky with dotted golden stars.

Between the years 1980 to 1992, the chapel has been carefully cleaned and restored. The process of restoration also included the removal of the modesty drapes that had been added over the nude figures. Critics argued that a vital second layer of the paint had been removed during restoration and the figures now seem flatter as compared to what they used to be earlier. People also believe that restoring the chapel has helped save Michelangelo’s masterpiece for the future generations to enjoy and appreciate.

Where is Sistine Chapel?

The Sistine Chapel is located in the Vatican City, which is a sovereign state within Rome, Italy.

June through August sees a lot of tourist traffic in the region and an appropriate time for sightseeing. During the month of August there are more tourists than locals.

The admission ticket costing € 16,00 would permit the tourists to also visit the Vatican Museums apart from the Sistine Chapel. It is valid for the day of issue. Reduced and Scholastic tickets are available as well.

The Sistine Chapel is open from 9:00 am to 6:00pm Monday through Friday. Both individual as well as group tours are available.