Home / Facts / Facts about the Colosseum in Rome

Facts about the Colosseum in Rome 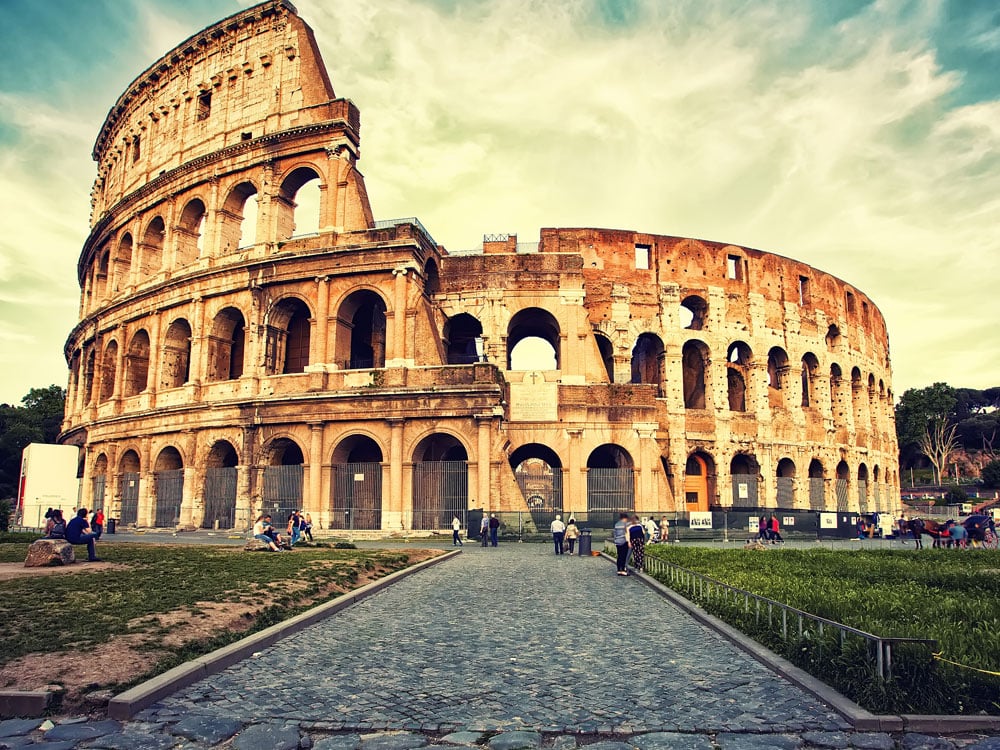 The Colosseum in Rome, Italy

A symbol of power, culture, and the macabre, the Colosseum in Rome, Italy, is a giant amphitheater located at the heart of the city. It was built by Emperor Vespasian of the Flavian Dynasty, in about eight years (72 AD to 80 AD). Originally named Amphitheaterum Flavianum, it became known as the Colosseum, a term derived from Colossus, representing the 30-m high statue of the Colossus of Nero.

An iconic Roman building, the Colosseum is considered among the greatest of all the structures built by the Romans. It has attracted historians, architects, engineers, and other visitors alike. Officials have calculated a daily visitor count of about 16,000 to 19,000 tourists.

Interesting Facts about the Colosseum

The elliptical Colosseum, 189 m long, 156 m wide, 48 m high, and covering about 24,000 cubic meters of base area was the largest building in the era it was built. The area it covers was earlier a lake built by Emperor Nero (37 AD to 68 AD) for his ‘Golden House’. Made of stone and concrete, the monument was painstakingly engineered to have 80 entrances and a seating capacity of 50,000. There were larger entrances and special seating for emperors and VIPs, and smaller entrances and higher seating for the lower class of people. An interesting feature is the outer façade or the stone wall, which was made using travertine stone, held together with iron clamps and gilded in many places in bronze. Another interesting fact is the use of a velarium to cover the building during rains.

The main purpose of the Colosseum was to stage ruthless contests for entertaining rulers, nobles and residents of the Roman towns. It is believed that the emperors used to appease them by providing a platform to enjoy gladiator battles, hunting using various wild animals, battle re-enactments in both sea and land, and executions. Wooden flooring was used to fill the arena with water to show naval battles. Sands were colored red to provide a dramatic look for the gruesome fights. The Colosseum also had underground vaults to put slaves, actors, gladiators, and animals there before they dramatically appeared in the arena stage. Legend has it that the very first ‘game’ held in the Flavian Amphitheater was presided over by Emperor Titus in 80 AD, lasted for 100 days and saw the death of 9,000 animals. For the next 767 years several such competitions were held, causing the loss of a total of 500,000 human lives and millions of lives of animals. After 847 AD, these entertainment activities in the Colosseum stopped. This was due to rising expenses in buying slaves and animals, and maintaining such an extravagant service.

While taking a walk inside the Colosseum you will see what remains of this massive structure after about 2,000 years of its construction. It looks like a place that has seen difficult times, which includes earthquakes and quarrying. The earthquake has ruined two-thirds of the structure on the southern side. Much of the bronze work and stones have been quarried to build nearby monuments, notable among them being St. Peter’s Basilica. You can see some interesting plant species here, which are believed to have been sourced from the fruits consumed by the spectators. You can also see a small chapel inside the premises that was made to sanctify the Colosseum.

The Colosseum was immortalized onscreen in director Ridley Scott’s movie, Gladiator (2000). The monument, was not used to shoot the scenes of the gladiatorial contests however. A realistic set was erected in Malta, since Scott found the real Colosseum to be ‘smaller’ than the space required to shoot such extravagant scenes.

To Know about the Location, Best time to visit and nearby attractions to the Colosseum in Rome, Italy click here.

Places to visit in Rome