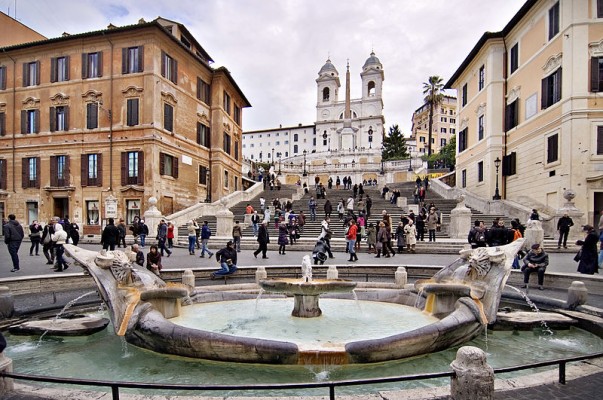 The Spanish Steps, Italy is a flight of steps in Rome that are known for their extraordinary sweep of architecture. These steps lead from the base of Piazza di Spagna up to the towering twin towers of Trinita' dei Monti. Trinita' dei Monti, also known as Trinity of the Mountains, is one of the twelve Egyptian obelisks that are located in Rome. There is an interesting story behind the nomenclature of these steps. Though called the Spanish Steps, these steps were actually built by the French to aid in the steep climb up to the French Church. However, Spanish Steps, Italy was so named as the residence of the Spanish Embassy was located at its base.

Design of Spanish Steps in Italy

The monumental stairway of Spanish Steps consists of 138 steps and was constructed with the aid of funds bequeathed by a generous French diplomat named Étienne Gueffier. A competition was held in the year 1717 to decide on the design of these steps. Though the entry by Alessandro Specchi was considered to be the best, a little known architect called Francesco de Sanctis was given the task to design these steps.

In the present times, a 9th-century crib is displayed on the first landing of the staircase during Christmas time. During the month of May, a part of the steps is covered by pots of pink azaleas. With the passing years, a small cut-flower market has also come up along these steps. The modern-day Roman urban regulations forbid the use of steps for eating lunch. The buildings and houses located along these steps are often used for filming.

In fact, the apartment that was the setting for the popular movie The Roman Spring of Mrs Stone  released in the year 1961, is set halfway up on the right of the steps. Apart from being a famous historic site in Rome, Italy, Spanish Steps is also a popular gathering place for locals as well as tourists. It is the longest and widest staircase in Europe and visited by thousands of tourists every year.

Your historical tours in Italy will remain incomplete without a visit to the Spanish Steps in Italy.