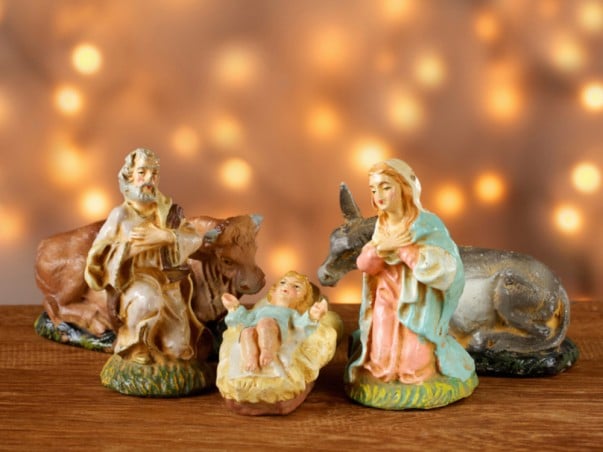 Nativity scenes on display during Christmas in Mexico

Christmas in Mexico is a special day, which is celebrated on a large scale. Christmas time is a fun time, which all the people enjoy with a great zeal and enthusiasm. There is a big difference between the celebrations of Christmas that are observed throughout the world and the festivities in Mexico. Christmas celebrations in Mexico start from December 3rd and continue till February 2nd.

A series of religious customs, and rituals are followed as part of Christmas celebration. Firstly, the celebration is marked with the ceremony of the Virgin de Guadalupe which continues from December 3 to 12. The celebration is followed by the ritual of Posadas, which starts from December 16th and continues till the 24th of the same month. Posadas is the enactment of the journey of Mary (on a donkey) and Joseph looking for a "room at the inn." A choir of small children follows them, and knocks on doors asking for accommodation for the fatigued couple.

Just before the special day of Noche Buena or Christmas Eve, the Mass of the Rooster is conducted at midnight. December 28th is celebrated as Los Santos Innocentes, a version of the April Fool's Day. It is said that on this day if you borrow anything, you needn't return it.

Dia de Los Reyes comes after it on January 6th. The final festival in the line is the El Dia de la Purificación which is observed on February 2nd. Pastorelas or shepherd's plays are also staged by both novice and professional groups during the Christmas season.

During Christmas, the Christmas tree is decorated with candies, apples, and cookies which are tied with red ribbon to give the tree a pretty look. Homes are decorated with candles and streamers and stockings are hung near the fireplace as part of a ritual. Nativity scenes are also exhibited from December 14th till February 2nd.

People, particularly the youngsters and kids dress in colorful dresses and roam about the streets. There are special programs organized which depict different phases of the life of Jesus Christ. It is basically a celebration of light, love, and peace, which is celebrated with friends and loved ones. There are restaurants and bars that remain open throughout the night to allow the party loving people to come and celebrate the whole night. Gift shops remain filled with various interesting things which people love to present to their dear ones.

If you truly wish to spread the Christmas cheer, you may join a volunteering body that offers assistance to poor children in Mexico. For example, this year Buckner International is organizing a trip to Mexico to provide new shoes to orphan children. The initiative is being called Shoes for Orphan Souls. Buckner International has invited compassionate people who would like to travel to Mexico and serve these poor children. The idea behind the project is to provide for families, so that families can sustain their kids, and the little children would not need to be moved to orphanages.