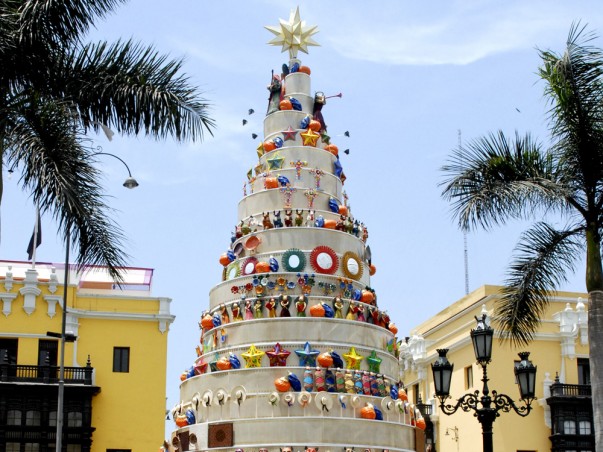 Christmas tree decoration at the Lima Cathedral in Peru

Christmas in Peru is celebrated on December 24 with much fanfare. It is celebrated as "Nocha Buena", a Spanish phrase which translates to "Good Night". Peru experiences summer during December, thus Christmas decorations with a snow motif may seem peculiar to some.

However, Christmas is equally enjoyable with Santa surfing on the waves and elves in bikinis. The summer Christmas features bright sun, outdoor recreation, ice-cream, t-shirts, and shorts.

In the evening, a family get-together called the Christmas for Children is held. There is preparation of pavo (turkey) as well as apple sauce in most of the houses.The popular choice for cake is 'panteon'. A panteon is a cake that is stuffed with fruits in its center. Hot chocolate drinks are also very popular during Christmas.

The people of Peru put the scenes of Nativity (bought from the market of Santurantikuy or the buying of saints) in their churches and homes. The market is held in the Plaza de Armas on December 24. They keep these scenes till the La Bjeda de los Reyes, which is celebrated as the arrival day of the three wise men on January 6.

A wide range of handicrafts are produced during Peruvian Christmas by the Andean people. These include the Nativity scenes made in Huamanga stones as well as altar pieces with images of Christmas. Sculptures for the nativity scene are sold in the annual craft fair of Santurantikuy. Santurantikuy translates to 'buying of the saints'. In this fair, Peruvian people buy for their homes figurines of the three wise men, Joseph, Mother Mary and Baby Jesus. The carvings are mostly made of Huamanga stones.

Going to someone's house during Christmas must include a cake in a pack. Gifts are supposed to have been brought by Santa Claus and can be seen lying under the tree. Fireworks during Christmas are banned in Peru. But fireworks definitely find their place in people's houses.

Children go to bed after midnight. But this is the time for the parties of the grown-ups to begin. There are lavish parties in most families, with the living and the dining room being used as the dance floor. Dancing to the tune of salsa song is common. The party generally goes till late in the night till 6:00 am the next morning. This results in most families waking up late on the next day, i.e. December 25.

The people of Peru are very generous. You may be invited to their party even if you are not well-known to that person. You do not have to be punctual as it is not considered proper to arrive right on time.