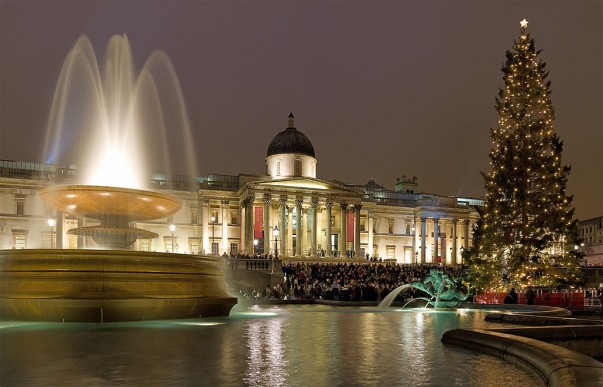 Christmas in England holds a lot of significance among the Christian community in England. The word Christmas is derived from the English word Cristes Maesse which means Christ's Mass. Although the first observance came in AD 360 in Rome, but the formal celebration started from AD 440.

Christmas in England has a long historical background. It has been celebrated in England for hundreds of years. It is in fact Britain's most popular festival. The first ever Christmas card was posted in the year 1840. This has now become a custom. These days many of these cards are sold even in aid of charities. Christmas in England spreads the feeling of brotherhood. The English families have been sharing this custom for centuries. It is a festive time when people go out with their friends and family to celebrate this festival. On this particular day guests are invited for a grand Christmas dinner.

A week before Christmas people send greeting cards to their friends and distant relatives, and decorate their houses with colorful lights and other paper decorations. During this time of the year the houses are decorated with Christmas trees. This was popularized by Prince Albert who initially brought one Christmas tree to the royal household in the year 1840. There is yet another piece of trivia regarding Christmas trees in the UK. In 1947 Norway presented Britain a large Christmas tree which stood in Trafalgar Square to commemorate the Anglo-Norwegian cooperation during the Second World War. Since then it has become a prevalent practice and a popular attraction in the heart of London.

Christmas is also popular among the children who sing and dance to the tunes of melodious carols. Carols are often sung by a group of singers on the eve of Christmas. Presents are either kept beneath the Christmas tree or hung on its branches. On Christmas day these presents are opened. The families then go to the church to attend various ceremonies. At the end of the day the families gather with their friends for a Christmas dinner. Traditionally, the dinner consists of roasted turkey goose or chicken stuffed with roasted potatoes. After that mince pies and pudding are served to the guests. The Christmas cake is served later in the day.

During Christmas the Queen addresses the nation over radio and television. In Britain the day after Christmas is known as Boxing Day, which gets its name from an ancient custom in England of giving a Christmas box with a gift or money inside it. The box is given to the delivery man or the trades people who provide regular service throughout the year. People also give a tip to the milkman, postman, and other service providers at this time of the year. Christmas in England is a time of celebration when people shed their grievances and spread the feeling of brotherhood and joy.