Map of Mongolia is a visual representation of the country's provinces, province capitals, national capital and bordering countries. The geographical coordinates of the country are 46° North latitude and 105° East longitude. Ulaanbaatar is the capital of the country lying at an altitude of 1284 meters above sea level. 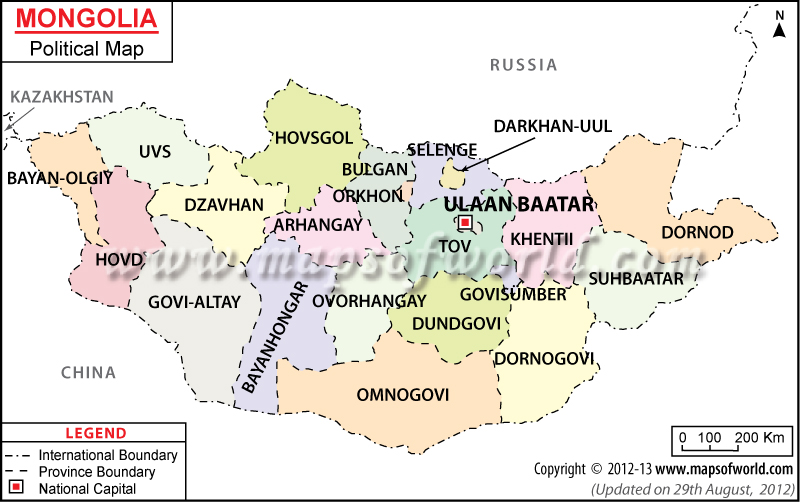 Location and Geography of Mongolia

Mongolia is situated in northern Asia, bordering China and Russia as shown in the Mongolia map. The geographical coordinates of the country are 46° North latitude and 105° East longitude. The total land area of Mongolia is 1,564, 116 square kilometers. The country experiences continental type of climate. The highest point is Nayramadlin Orgil situated 4, 374 meters above sea level. The lowest point of the country is 518 meters, the Hoh Nuur River.

The capital of Mongolia is Ulaanbaatar and is marked with red dot in the printable map of Mongolia. The city is situated at a height of 1284 meters above sea level. The latitudinal and longitudinal extent of the city is 47° 55′ North and 106° 55′ East respectively. The neighboring cities are Songiin, Omolgon Baatar, Dzuunmod, Bogdoiin Hiid, Dzuun Salaanii Dygang and Damba Darajayn Hiid. Buyant Ukhaa is the only airport in the city serving as a gateway to the city.

Where Is Mongolia Located?