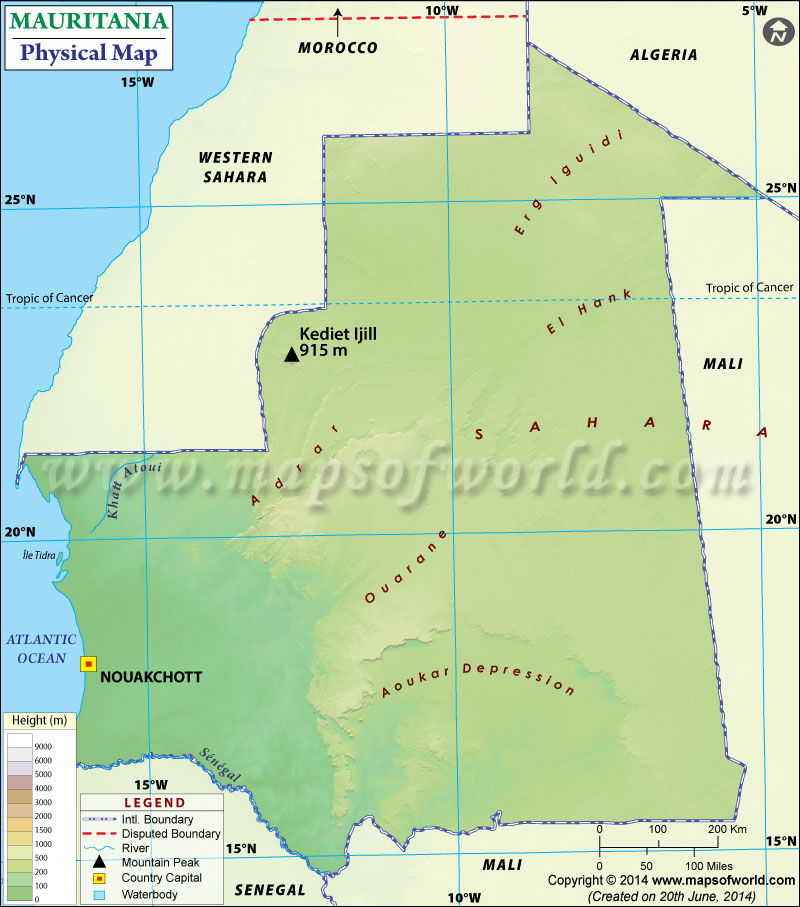 Mauritania is a sovereign state in Northwest Africa. It shares its boundary with the Atlantic Ocean to the west, Western Sahara to the northwest and north, Senegal to the Southwest and Mali to the east and southeast. Nouakchott, the capital and the largest city of Mauritania, is marked on the map. A map legend featured at the bottom helps all the signs, characters, graphics, and symbols used throughout the map. You can use this map for schoolwork, presentation and other purposes.

Mauritania is located on the Atlantic Coast. The country covers an area of 1,030,700 square kilometres. The country’s topography is mostly flat, with vast arid plains broken by occasional ridges. Three-fourths of the country approximately is covered by desert or semidesert. Further, Mauritania can be divided into the following parts based on topography:

Plains and Sand Dunes in Mauritania

Towards the western part of the country, between the plateaus and the ocean, lies the clayey plains and dunes (ergs). The dunes increase in size towards the north. Because of high winds, dunes shift from place to place and have increased mobility towards the north. The entire country of Mauritania lies below an altitude of 1,000 meters (3,300 ft). The coastal plains in the country are lower than 150 feet (45 metres) located at the lower Senegal River Valley of the Southwest. Compared to coastal plains, there are higher plains in the interior of Mauritania with an average elevation of about 600-750 feet (180-230 metres).

A series of scarps bisects the plains in the Center of the country Longitudinally. From the interior tables, plateaus are formed, occurring at different levels of different heights. These plateaus form many tablelands joined by long, gentle slopes. The sloping plains terminate at the one end of the hill with a faulted scarp or cliff, which result in inselbergs (steep-sided residual hills). The highest point is Mount Ijill, at 3,002 feet(915 meters). The scarps separate sandstone Plateaus, the highest of which is the Adrar Plateau. Adrar region consists of low central massif with cliffs that elevation of about 800 feet. Another prominent feature is the Guelph er Richat in the north-central part. The plateaus in the country gradually descend towards the northeast area to the barren land of El Djouf (an arid natural region of dunes) that merged into the Sahara Desert.

The drainage pattern is mainly limited to the Senegal River and its tributaries in southwestern Mauritania. This river flows southward, forming a frontier between Mauritania and Senegal and sometimes leads to temporary flooding in summer. In other parts of the country, plateaus are cut into by wadis(dry riverbeds). There is practically no runoff in the north part of the country because of rare precipitation.

Where is Mauritania Located

Map of Mauritania with Cities