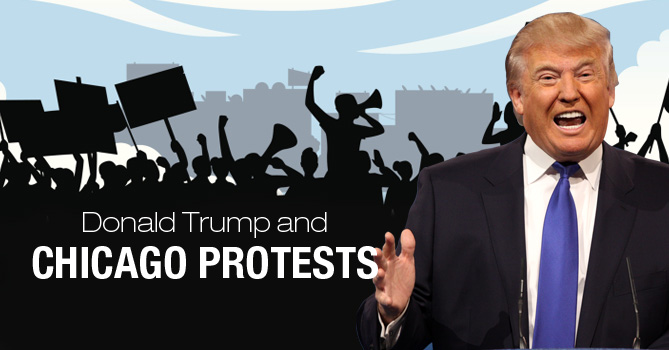 When media came to know that Donald Trump was outraged because his freedom of speech was violated on Saturday night when his rally in Chicago had to be called off due to protests, they responded by saying that his “fondness for free expression is highly selective.” That was perhaps the drift of the event that took place in University of Illinois-Chicago (UIC).

What Transpired at Trump’s Chicago Rally?

The Republican front-runner was in for a surprise when hundreds of protesters invaded his rally and forced him to cancel the event. Anti-Trump slogans reared their heads as protesters started interrupting Trump’s speech. The verbal protest soon turned into a physical duel with the supporters of Trump engaging in fistfight with the protesters. Although there had been protests in Trump’s earlier rallies, the one that happened in Chicago was different. It was larger in scale and the protest seemed to be the result of a well-coordinated effort.

Thousands of young people, mostly minorities, had assembled near the university with an intention of stopping Trump from holding a rally. It was a victory for them to see the rally shutting down abruptly, as one of the protesters was heard saying, “I’ve never been more proud of my city.” Trump can draw sympathy from his fans and leverage this situation to his benefit by arguing that he was the victim of “unconstitutional attacks on America’s fundamental freedoms”, his opponents are convinced that the violence at Trump’s rally was a direct consequence of the degrading tone of the election campaign, and “highly charged rhetoric over race.”

How was the Chicago Protest Planned?

When students of the University of Illinois-Chicago came to know about Trump’s visit on Saturday, they decided to plan a demonstration. They connected with pro-Bernie Sanders and Black Lives Matter activists. In a widely attended meeting, the representatives of student groups from the Black Student Union, Muslim Student Association, and Fearless and Undocumented Alliance decided to march outside the rally to protest.

According to one of the student organizers, they strongly felt that “Donald Trump and his bigotry and racism wasn’t welcome here.” A similar train of thought ran down the mind of several other protesters who thought that Trump has “marginalized and dehumanized a lot of different groups” who came together to voice their angst.

What is worth noting is the way the protest was planned in such a short time. The organizers created a Facebook page promoting the protest and by the night of Trump’s rally, over 11,600 people had responded in positive. Close to 20,000 said that they were “interested.” The Facebook analytics revealed that the post reached more than 1.5 million users. Apart from event details, the post also carried an instruction: the protest should remain peaceful.

A similar initiative was started by an undocumented graduate student at UIC. She started an online petition requesting the administration to cancel the event. It received more than 50,000 signatures. Within no time, banners were printed and emails were to people in the Chicago area urging them to participate in the protest.

The Protest was Full of Symbolism

The protesters were making strong statements at the Chicago rally with their placards and their tee-shirts. One of the pro-minority tee-shirts, which protested police violence, read, “Black Lives Matter.”A placard was seen at the rally that said, “We are not rapists.” It was a direct reference to Trump’s stereotyping of Mexican immigrants as rapists.

While Donald Trump can accuse the “bad dudes” and “very bad protesters” of spoiling the fun, the people are convinced that the violence erupted as a result of systematic ‘demonizing’ of minorities and sanctioning violence. As one of the columns of news daily in the US put it, “He (Trump) has gone out of his way to frighten his followers and his opponents, and frightened people don’t always behave with respect and restraint.”

Perhaps, it’s time that Trump cut down on charged rhetoric and made judicious use of words.