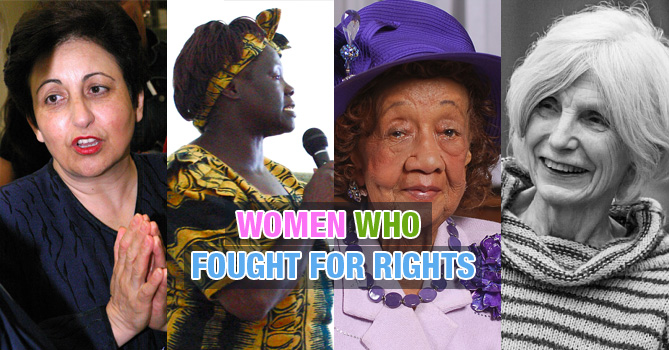 “I am not going to die, I am going home like a shooting star.” These were the words of a notable African American lady who became the first black woman to win a lawsuit against a white man to save her son from slavery. When she passed away in 1883, she had already built the foundation of resilience for the others to develop the edifice. In the last two centuries, the world has seen many such strong-willed women who conquered fear, discrimination, persecution and challenged the status quo to drive home the idea: “The earth is the mother of all people, and all people should have equal rights upon it.”

The world should be perennially grateful to these women rights activists who dedicated their years to ensure that no one is left out in the cold to languish.

The “Mother of the American Civil Rights Movement” started to be seen in the national scene when she pushed herself hard to build a case for hiring African-American teachers after she joined the National Association for the Advancement of Colored People. Septima also started citizenship schools that taught literacy to adults. The idea was to help African Americans register to vote. She also fought for equal pay for black and white teachers. Victory was hers. The US President Jimmy Carter awarded her the Living Legacy award in 1979 for her contribution to the Civil Rights Movement.

Famous Quote: “I have great belief in the fact that whenever there is chaos, it creates wonderful thinking. I consider chaos a gift.”

She was one of the eminent figures who took civil rights very seriously. Dorothy had worked closely with Martin Luther King Jr. and other civil rights activists to improve the opportunities for African-American women. In the early 20th century, when illiteracy and unemployment were alarmingly high and voter awareness was just a concept, Dorothy steered the ship of women’s rights to a safe harbor.

She was one of those activists who helped in setting up the National Women’s Political Caucus. She was at the helm of the National Council of Negro Women for 40 years and was awarded the Presidential Medal of Freedom by former US President Bill Clinton in 1994.

Famous Quote: “Greatness is not measured by what a man or woman accomplishes, but by the opposition he or she has overcome to reach his goals.”

The First Lady of Argentina was the founder of Eva Peron Foundation that worked towards building homes and hospitals and providing scholarships to students. Her organization played a significant role in improving Argentina’s healthcare system. Evita’s efforts toward helping Argentine women get the right to vote is unforgettable. After she founded the Female Peronist Party, she inspired women to take active part in Argentine politics. She heralded all these changes before passing away at the age of 33. Evita received the official title of “Spiritual Leader of the Nation.”

Famous Quote: “To convince oneself that one has the right to live decently takes time.”

One of the most influential writers that the world has ever known, Caryl Churchill is a British playwright and women’s rights activist. It is through her unconventional plays that she tried to challenge the status quo and propagate her strong views on women’s power and gender inequalities to create a realistic caricature of the society. An abolitionist at heart, she presented the orthodox facet of society and antagonize the “shabby and frail ideologies.” During her theatrical journey, she was able to bring about significant changes in the society through innovative writing.

Famous Quote: “People aren’t evil and people aren’t good. They live how they can one day at a time. They come out of dust they go back to dust, dusty feet, no wings, and whose fault is that?”

Not only Kenya, but the entire world remembers Wangari Maathai’s fight against the authoritarian regime in the ’90s. Ever since the Kenyan activist founded the Green Belt Movement to promote environmental conservation and women’s rights, she became the target of the government that tried to muffle her voice. Her stand on democratic rights was the reason why the Kenyan government came down heavily on her. Perhaps the biggest irony of her life hit her when her husband said that she was “too strong-minded for a woman” and he was “unable to control her.” In 2004, she became the first African woman to receive the Nobel Peace Prize for “her contribution to sustainable development, democracy and peace.”

Famous Quote: “I don’t really know why I care so much. I just have something inside me that tells me that there is a problem, and I have got to do something about it. I think that is what I would call the God in me.”

Shirin Ebadi is an Iranian lawyer, human rights activist and founder of Defenders of Human Rights Center in Iran who also received the Nobel Peace Prize in 2003 for her pioneering work in the domain of human rights. Shirin is particularly concerned about children’s, women’s, and refugee rights. In her capacity as a lawyer, Shirin defended cases of child abuse and bans on periodicals. She is the founder of two NGOs in Iran – the Defenders of Human Rights Center (DHRC) and Society for Protecting the Rights of the Child (SPRC).

Famous Quote: “Women are the victims of this patriarchal culture, but they are also its carriers. Let us keep in mind that every oppressive man was raised in the confines of his mother’s home.”