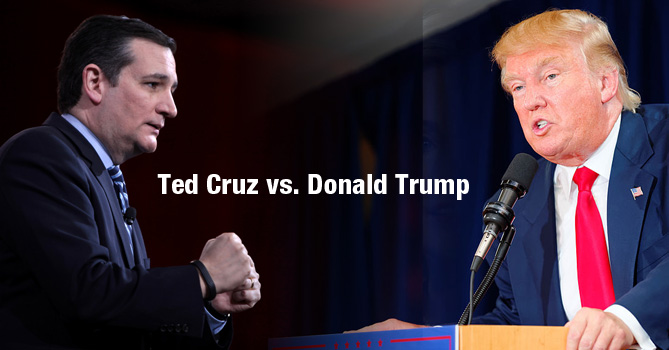 It was only last week when Donald Trump thundered during one of the press conferences, “”I would love to take on Ted Cruz one on one.” This might sound like a man confident of his prospects, but deep within Trump knows that even before he can go into a battle with Hillary Clinton for the final race to the White House, he has another hurdle to overcome – Ted Cruz. The 69-year-old front-runner has hardly ever considered his fellow Republicans – Marco Rubio and John Kasich – as rivals because they have made very little progress.

The feeling of being challenged perhaps nudged him last Saturday when he managed to win Louisiana and Kentucky, that too, with very narrow margin. He didn’t have absolutely any chance in two other states – Maine and Kansas. Losing Maine caucuses was actually his first defeat in the Northeast.

Why Ted Cruz can Afford to be Hopeful?

Analysts were perhaps slightly impulsive in judging Cruz and assuming that his appeal is confined to a particular region. They were almost confident that Northeast would never embrace him. When the Republican cruised past Donald Trump and secured an impressive victory in Maine caucuses, it became clear that no one can write him off so early. His defeat in New Hampshire, Massachusetts, and Vermont was offset by the victory in Maine.

The Cruz’s argument that he is the best Republican candidate to contain Trump’s progress is no hollow claim because the man has won the easternmost state in the US and and the second-westernmost state in the country, Alaska. It strongly negated the narrative that he cuts no ice with the voters except those in the Midwest.

Ted Cruz has sensed an opportunity and there’s already spring in his footsteps. Like a true Presidential hopeful, he has started talking about the “breadth of support,” he has in order to convince Rubio and Kasich to hang the boots. He has already set a target for himself – to amass delegates. All he wants is the battlefield to be “less divided.”

Cruz has reiterated in his ‘Stop Trump’ campaign that defeating Donald Trump was essential for “the very soul of America.” Leveraging the negative reactions to Trump’s rabble-rousing comment (by the way, the Time magazine has already dubbed Trump as a Demagogue), he has urged people to think how they would feel when their kids would repeat the words of Donald Trump if he became the president of the United States.

Moreover, there’s a significant chunk of Republicans unhappy with Trump. It’s suggestive from the fact that it’s only in one state that he had finished with above 40 per cent vote. The campaign to deny Trump the nomination also got a shot in the arm when Mitt Romney joined the rest in describing the real-estate mogul as a threat to the party and the nation. Trump has also invited criticism with his polarizing comments about building a wall along the Mexican border and illegal immigrants causing crime.

Trump may say that he wants “Ted one-on-one” and draw laughs by making personal attacks, but he would be tad nervous before the primaries in Michigan and Mississippi on Tuesday, March 8.

What if Ted Cruz Ropes in Maco Rubio?

Hypothetically speaking, if Ted Cruz offers Marco Rubio the position of Vice-President in return of quitting the race, there’s a good chance that Rubio will say ‘yes.’ He is not having a rocking time and there’ nothing much he can expect from Florida. So, if the two Cuban-Americans decide to traverse the country together and boost the ‘Never Trump’ campaign, Donald Trump would have enough reason to fear.