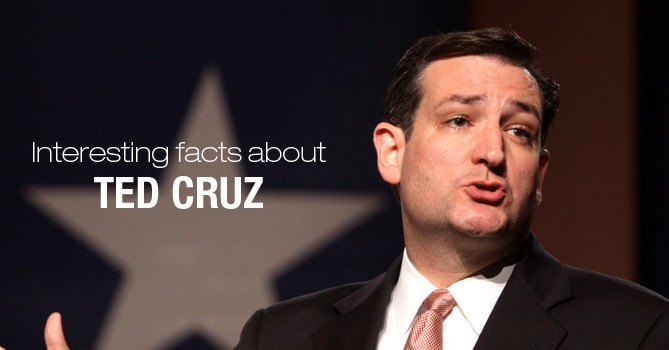 Ted Cruz is fast emerging as the man to watch out for in the 2016 US presidential elections. He already has seven wins in his pocket and has begun to give a steady competition to front-runner Donald trump. The Texas Senator, who has his eyes firmly set on the Florida primaries, is currently busy rallying Republicans behind him to beat Trump. So, as the senator is busy in chalking out strategies for the primaries, let us take note of few interesting points of his life.

He broke a few records in Texas

Ted Cruz has a connection with Cuba through his father Rafael Bienvenido Cruz. The senior Cruz was born in Cuba in 1939. He was an active opponent of Batista, the dictator of Cuba and fought in the revolution. Young Rafael was imprisoned and beaten. But in 1957, when he was 18 years old, Rafael escaped to the United States on a student visa. All he had at that time was $100 in his pocket – not exactly in his pocket but sewn into his underwear.

Ted Cruz was born in Canada

Ted Cruz’s father, Rafael, was working in Canada when the junior Cruz was born in 1970. However, as Rafael was married to an American citizen, Ted was born a U.S. citizen. However, the Constitution of the United States says that a presidential candidate should be a natural-born citizen. A lawsuit was filed by supporters of Donald Trump asserting that Cruz was ineligible to run for the presidential race. Even rival Donald Trump referred to him as a “Canadian anchor baby” during a town hall in New Hampshire. However, all the controversy was laid to rest in February 2016 with the Illinois Board of Elections ruling in Ted’s favor.

In August 2013, Cruz formally renounced his Canadian citizenship. On May 14, 2014, he ceased to be a citizen of Canada. Nevertheless, if Ted Cruz was to become the president he would be the first president of the U.S to be born in Canada.

He is an Ivy Leaguer

Cruz argued cases in front of the U.S. Supreme Court

Ted Cruz has the distinction of arguing before the apex court of the United States nine times. This was much before he was the Texas senator. This is much more than any practising lawyer in Texas and the record is yet to be broken.