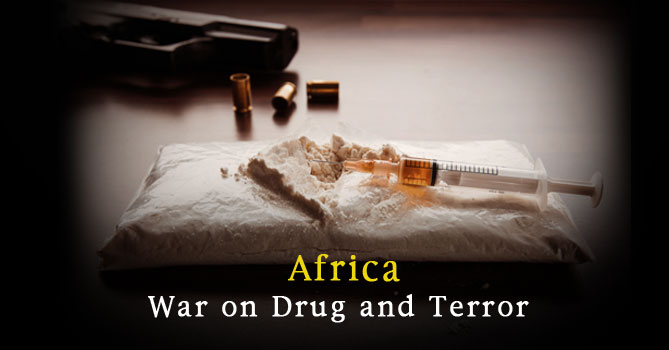 The rise of ISIS in Africa is inextricably linked with the expansion of drug trafficking networks across the region. A major contributor to this has been the cocaine trade that occurs along the southern coasts of Europe. The militants, in the 2000s, used the route along the North African coast to smuggle cocaine into Europe.  It is alleged that the cash acquired from the trade was used by the Islamist terrorists of North Africa to capture vast areas of Mali in 2013. The group then subsequently pledged its support for the Islamic State. The networks of drug trade have come up in the desert regions of Niger, Mali and Algeria, where the rule of law is absent and trafficking is easier. The money from this trade is routed to the terrorist groups which use it to buy weapons and fund their organizations.

The Networks of Drug Trade

The Northern part of Africa appears to be fully embroiled in the illicit trade of drugs, whereby, the Western region supplies cocaine to European markets, the Eastern region sends Asian Heroin to European to American markets. The locally grown Hashish ends up in Europe along with Khat, a Somalian plant known for its stimulating effects. The money from drug trafficking is being supplied from regions across the Atlantic, including countries such as Colombia, Peru, and Bolivia.

The West African region, which according to recent estimate sees a transfer of 30 metric tons to 40 metric tons of cocaine, generates $800 million dollars every year. It provides a lucrative income to not only the South American drug cartels but also the African drug traffickers who are a part of the local tribal groups.

Besides the sea routes taken by the peddlers, the drugs are also parceled from South America to West Africa via the air route which follows the shortest distance along the 10th parallel, also known as “Highway 10”. From here, the path taken to Europe goes along the traditional routes once taken by the camel caravans, controlled by tribal groups.

Even today, tribal groups such as Tuareg and Toubou control these networks and smuggle anything from weapons to cigarettes. The social chaos and political instability in these countries provide a convenient space for such activities. The turmoil in Mali and the military coups and other changes in Guinea-Bissau’s weak government have triggered a competition among the terrorist groups for the control of routes and profits.

Terror Groups are in Cahoots with Drug Peddlers

In countries such as Nigeria, Benin and Ghana, cocaine arrives hidden in shipments of plantains or coffee and their transport to Europe is facilitated by corrupt officials. Forty per cent of cocaine that reaches Europe comes from Africa. That is where al-Qaida in the Islamic Maghreb (AQIM), or several of the Islamist groups that have been active in raiding and destabilizing Mali, Mauritania, Niger and Burkina Faso, too, have their cut of the profits, either from being the major transporters of cocaine across the Sahara to Europe or from facilitating that traffic for a sizable slice of the returns.

Boko Haram, which controls traditional long-distance trading routes to the north of Mediterranean Sea, also uses the funds derived from the illicit trade in drugs to finance its groups’ operations across the region.

Interplay between Terrorism and Drug Trafficking

The expansive growth in the trafficking of drugs across Africa and Europe by terrorist organizations points to a much larger and a more complex set of problems. The funds garnered from this trade are being used to fuel terror operations and fund other sorts of criminal activities around the world. While, the growth of ISIS was initially believed to be a consequence of its ideological appeals, the revelations on the amount of money exchanging hands in the drug operations reveals that for most groups, it is money-making opportunities and not ideologies that propel their support to the ISIS.

Historically, the interplay between terrorism and drug trafficking can be traced to the drug networks of Al-Qaeda which thrived on the money supplied by the opium trade of Afghanistan. According to the UNODC’s World Drug Report 2007, the total potential value of Afghanistan’s 2006 opium harvest accruing to farmers, laboratory owners and Afghan traffickers reached about US$ 3.1 billion. In addition, it is reported that in 2004, some 400 tons of cocaine was exported from one Latin American country, with an estimated domestic value of US$ 2 billion, a chunk of which was used by the terror outfit to plan, finance and carry out attacks. This mode of garnering finances for terror operations is now being emulated by Islamist groups at a pace much greater than that of the Al-Qaeda.

How to Make ISIS Fund-starved?

However, with the unearthing of a potentially quantifiable reason for the rise of the ISIS, the research has provided countries such as Britain, France and America with the opportunity to combat terror. Guarding unmanned trading routes and increasing security for local administration in politically volatile countries such as Mali and Somalia will make drug trafficking more costly in Africa.  This can put a check on Islamic state’s finances, thus denting its terror operations.

Another long-term policy can be to legalize cocaine and heroin markets in Europe. Decriminalization of these drugs would make them taxable, reduce custom prices and virtually eliminate any incentive to peddle these drugs illicitly across borders.

The fight against the ISIS is a multidimensional affair. The most significant aspect of this is, however, the big billions that are raised to fund its operations. Any effort directed at curtailing the supply of such funds should go a long way in preventing the rise of the ISIS.