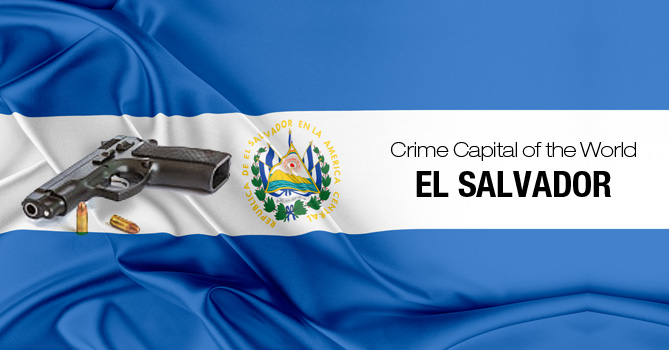 There are several countries which are plagued with violence and killings, but El Salvador with approximately 6.38 million population, is a lone country where deadly gang war has turned it into the most violent corner of the world.  According to the Institute of Legal Medicine in El Salvador, the country reported 6,656 killings last year. An average 18.23 killings took place everyday in the country in 2015, a staggering 67 per cent jump in the rate of killings from the year 2014. For a nation with elected government, this is perhaps a grim tell tale of the situation. More so in the background of the fact that majority of those who fall victims to gang war shootings belong to raw youthful age. In 2015, more than 48 per cent of all homicide victims were Salvadoran males between 15 and 29 years old. And not all the streets and corners of the country are splattered with blood. Instead, just four areas of the country: San Salvador, La Libertad, Soyapango and Usulutan- have witnessed gang war killings. Also, number of killings in the gang war is more than those died during the country’s civil war, which occurred from 1980 to 1992.

Illegal drug trade is cited as the main reason for such a huge rise in murder rates. Cocaine, which finds its way into the US, is transit through El Salvador by drug peddlers from Columbia. It is said that millions of dollars worth of money is involved in the illegal drug business in which hundreds of school dropouts and unemployed Salvadoran youth work as peddlers. Violent disputes break out among them over shipping routes and retail outlets. In the crossfire between drug peddlers, most often innocent people also get caught up and killed. To check the menace, the government resorted to heavy crackdown on drug mafia and their gangs. Taking an unlikely method, the Salvadoran government brought a truce between two major gangs of drug peddlers. This helped in bringing down homicide rate in the country, yet it failed to reduce other criminal activities such as extortion. In 2014, however, the government pushed ceasefire agreement between gangs failed, leading to upsurge in killings. Today, El Salvador is seen as killing fields of the Central American region.

According to some experts, the violence and blood bath that currently plagues El Salvador is not due to drug smuggling business alone, but also due to some other historical reasons. Fight between Marxist guerrillas and the ruling establishment for years is talked about in this regard. The El Salvador government, supported by the US with money and ammunition, undertook heavy-handed approach to crush the guerrillas. It is said that the government used US trained death squads to kill the rebels and their suspected sympathizers. As per the Centre for Justice and Accountability, a US-based non-profit international human rights organization, more than 75,000 people died during the long spell of civil strife between Marxist guerrillas and the government forces and hundreds of others fled to the US for asylum. Experts say that the 1992 peace accord ended the war, but it came at a high price for El Salvador’s future. Those accused of committing crimes against humanity during the civil war, were granted amnesty. This generated hatred among family members of victims. They felt that the amnesty guaranteed a generation of perpetrators that they could kill without fear of punishment.

Besides, lack of education and unemployment among youth, rampant corruption has further worsened the situation in the country. Not only that, prison conditions and non-professional policing system are also said to be contributing to the mess in the country. Result is: neighboring countries like Honduras and Guatemala have also begun to experience gang war and other organised crimes linked with drugs. Recently, the US Congress approved $750 million to control corruption, gang war and other organized crime stalking Central American countries. But these measures are yet to pay dividends as they fulfill only administrative agenda of the Salvadoran government and not the social and economic agenda of the country. Thereby, unless serious investments are made to improve the country’s derelict education system and effective steps are taken for employment generation, El Salvador cannot be rescued from its steep fall into the deep gorge of crisis.