Download Picture of Blank Guam Flag For Kids to Color. The Guam flag was designed in 1917 by Mrs. Helen L. Paul. Mrs Paul was the wife of a US… 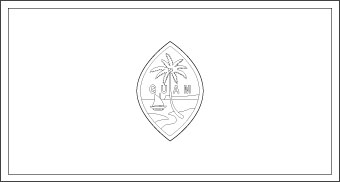 Download Picture of Blank Guam Flag For Kids to Color.

The Guam flag was designed in 1917 by Mrs. Helen L. Paul. Mrs Paul was the wife of a US Naval Officer, The national flag of Guam was adopted in 1948. The Guam flag is made up of a field of blue with a red border.

In the middle of the blue field is the country’s coat of arms which is oval in shape. The coat of arms features a canoe sailing in Agana Bay near Hagatna; a coconut palm silhouetted against Two Lover’s Point in Tumon Bay; and the name of the country, GUAM in red letters.

The oval shape of the ensign refers to the ancient Chamorro sling stones that were used on the island. In 1930, the oval design was officially made the Great Seal of the Territory of Guam. The colors and the design of the Guam Flag have been borrowed from the United States flag.

The Guam Flag was officially accepted by the Guam Congress on February 9, 1948.

History of Federated States of Micronesia

Geography of Federated States of Micronesia

History of Federated States of Micronesia

Islands of Federated States of Micronesia

Land and People of Federated States of Micronesia