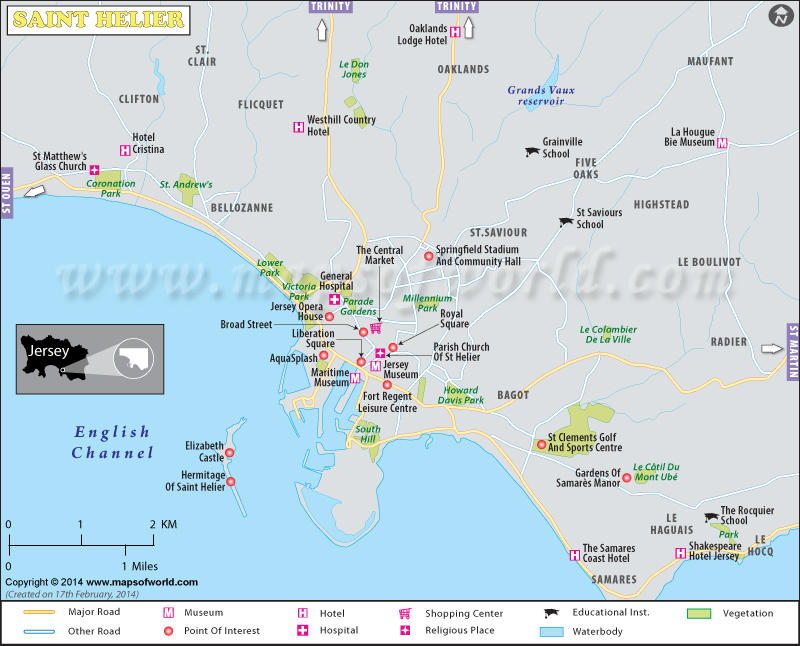 Saint Helier is one of the twelve parishes of Jersey, as well as its capital. Home to around 33,500 residents, a greater part of this port is still predominantly rural. The town is named after St. Helier who was martyred there in AD 555. The Hermitage, a small 12th century oratory on L’Islet, has preserved the memory of this saint till this day.

The site of Saint Helier is thought to have been settled at the time of the Roman control of Gaul, though the harbor was built in 1751 with the monetary help provided by King George II. The Royal Square, situated in the center, was the site of the Battle of Jersey in 1781, where the French tried to seize Jersey unsuccessfully. Gradually Saint Helier grew as an agricultural hub, exporting its products to London and Paris. This parish was also under the oppressive rule of the Nazis, from which they were liberated in 1945. There are several architectural evidences in Saint Helier that signify important events from their historical past. Languages spoken here include English, French and Jerriais.

Jersey is the largest of the Channel Islands in the English Channel. Saint Helier is located along St. Aubin’s Bay opposite L’Islet, a tidal island, on the southern end of Jersey Island. The town covers a total area of 10.6 sq. km. The seashore in the southern part is covered with sand dunes.

The easiest way to reach Saint Helier is to fly to Jersey Airport, which is served by several airlines like the British Airways, Air France, Easy Jet, to name a few. From the airport one can avail of either a car or a bus to the town of Saint Helier.

Once there, it is advisable to walk around Saint Helier to enjoy its sites. Boat trips are also available from St. Helier to the nearby islands.

Saint Helier experiences a temperate climate with mild winters and cool summers. The relatively bright sun accompanied by wide stretches of the seashore make the capital town an ideal tourist destination for an island holiday in the summers, especially between May and October.

There are several local events and festivals that are celebrated in Saint Helier :

Besides these, Saint Helier also celebrates the common Christian Festivals of Christmas, Easter and Thanksgiving.

Apart from these there are certain castles and forts, like the Elizabeth Castle, built in the latter part of 16th century, and Mont Orgueil that speak of the town’s historic past.

There are over 30 hotels in Saint Helier; hence accommodation won’t be a problem. Among the many hotels, Eulah Country House Hotel is the best luxury hotel of the area. Other luxury hotels include Royal Yacht Hotel, The Club Hotel and Spa, and The Inn Boutique. There are also several budget hotels that include Runnymade Court Hotel, Apollo Hotel and Stafford Hotel. Apart from these hotels, Saint Helier has plenty of apartments and cottages that are available on rent that gives a majestic view of the sea.