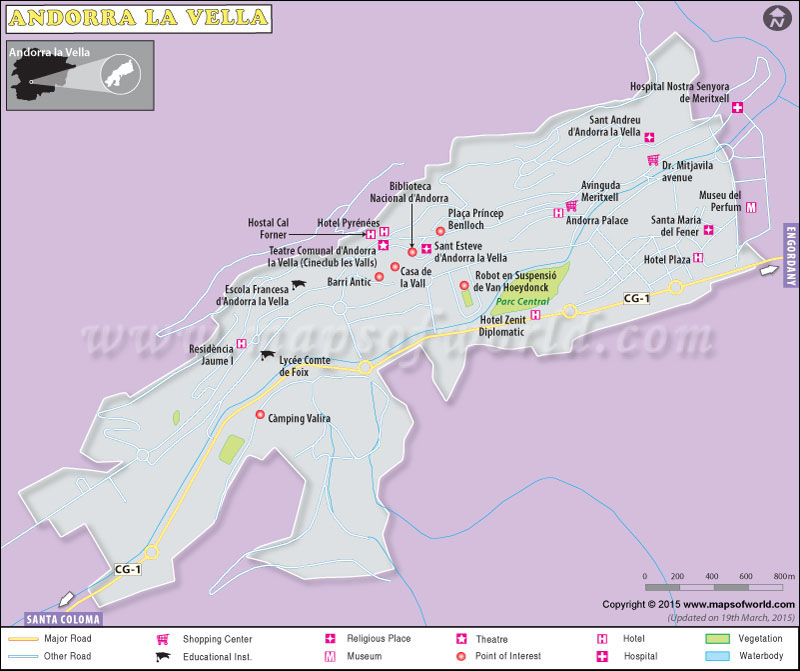 Andorra la Vella is the capital of the principality of Andorra located high above the Pyrenees. It is sandwiched between France and Spain. The city is very old and was probably settled by the Andosin tribe in the pre Christian era. In 1278 when the French and Episcopal princes agreed to joint suzerainty, it became the principal city of Andorra. In 1993, when Andorra formalized parliamentary democracy, Andorra la Vella became the formal seat of the government.

The city of Andorra la Vella is located high in the eastern Pyrenees. So, it has a rugged topography. It is situated in the south west of the country. The city is set amidst a rugged landscape. It has an altitude of 1023 meters above the sea level. The rivers Valira Del Norte and Valira Del Oriente join together to form the Grand Valira. Andorra la Vella is situated at this confluence.

The city has temperate climate with warm sunny summers and snowy winters. Some amount of precipitation is recorded throughout the year.

The city or even the principality does not have an airport. So, if you are coming by flight, you can land in the international airports at Toulouse (France), Barcelona, Gerona or Lerida in Spain. Then, daily bus service can take you to Andorra la Vella within three to four hours. These cities also have train stations.

However, in order to complete the last leg of the journey to Andorra la Vella, bus service is most commonly used. Once you reach the city, you can explore it on foot to savor the flavor.

Choosing your time of visit to Andorra la Vella depends on the activities that you plan to enjoy there. December is definitely the favorite tourist season because the surrounding country offers excellent skiing. But if you want to enjoy the customs and festivals then choose to visit between July and September. This is the peak summer season in the capital.

The culture of Andorra la Vella is largely influenced by its neighbors – France and Spain, and elements of both can be clearly seen in the folk traditions, religion and costume. Today, it has become an international tourist destination because of its excellent skiing opportunities while banking has developed as the country emerged as a tax haven. The result is that Andorra la Vella is now a delightful mixture of folk and cosmopolitan culture.

Several festivals are celebrated, concentrated mostly in summer. In the festival of folklore dances, Andorra la Vella celebrates the Contrapas which is a unique dance of the capital. The Feast of St. John is celebrated on midsummer’s day. In Andorra la Vella, a group of young people light birch barks (les falls) and hold a parade, swinging these by a string. The festivities are associated with the earth cycle and ancestral beliefs.

Since 1992, regular theatre festivals are arranged. Local and international companies perform in Theatre Comunal and Congress Centre during February to April and October to December.

Another unique festival is the female clown festival held in May where performers from many different countries come to Andorra la Vella to perform.

Finally, there is the much loved Andorra la Vella village festival that is celebrated for three days from the first Saturday in August.

The quaint charm, the historic buildings, the beautiful architecture and the numerous churches are the main attractions of Andorra la Vella.