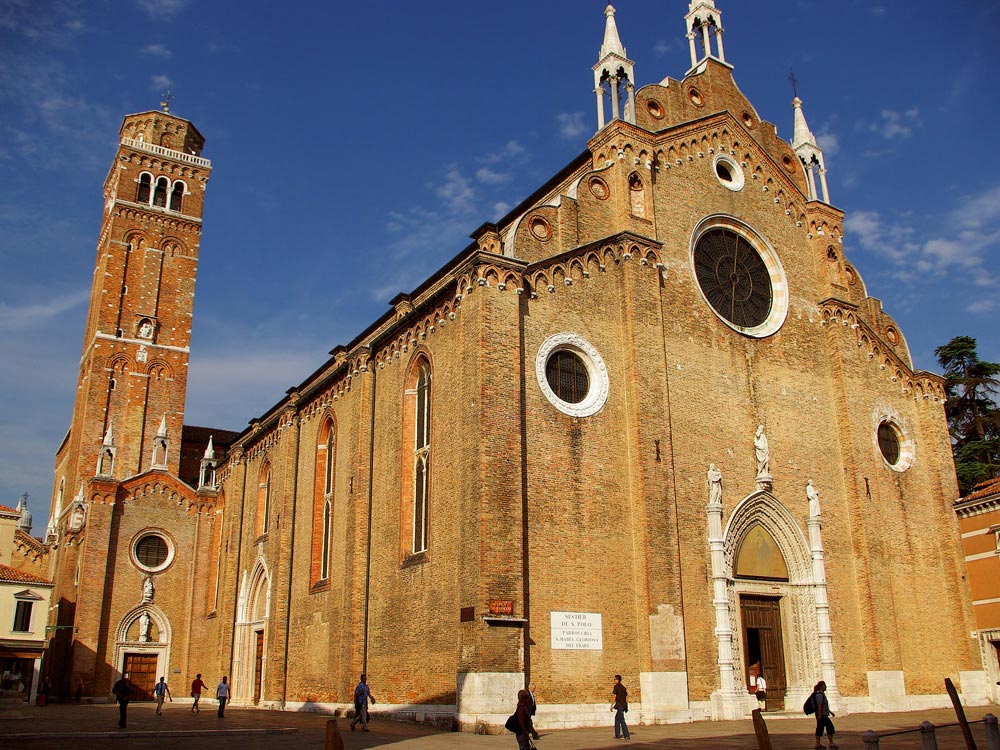 The church of Santa Maria Gloriosa dei Frari in Venice is also known as Chiesa dei Frari or Basilica dei Frari. It is acknowledged as one of the premier tourist attractions in Venice. The graceful and elegant church of Santa Maria Gloriosa dei Frari rivals the Dominicans’ church of SS. Giovanni e Paolo, both in size as well as grandeur. Both these churches are the most marvelous examples of religious Gothic architecture in Venice. Similar to the contemporary SS. Giovanni e Paolo, this gigantic Gothic brick church was constructed for one of the mendicant’s orders which based themselves in huge urban settlements.

The construction of the first church on this site started around 1250 in an area donated to Franciscans by the Doge Jacopo Tiepolo, and was completed in 1338. The bell tower of the Frari’s square which is the tallest after San Marco’s was completed in 1396, and the previous church was destroyed around 1417. The construction of the final church of Frari with its grand façade came to an end in 1443, and the solemn consecration of the Church of Santa Maria Gloriosa dei Frari finally occurred in 1469.

The gorgeous interiors of the Chiesa dei Frari are dotted with some funeral monuments to Doges, Bishops, generals and admirals of Venice, and also include noted masterpieces by Titian, Giovanni Bellini, Donatello, Jacopo Sansovino and others.

While you travel to Venice then don’t forget to pay a visit to the Chiesa dei Frari and just behind the church, you will come across the Scuola Grande di San Rocco, where the most well-known works of the painter Tintoretto can be seen.

The church of Santa Maria Gloriosa dei Frari is located in Venice, Italy. You can reach the church within a 20-minute drive from the Aeroporto Marco Polo in Via Galileo Galilei, Venice.

The best time to visit the church is during the months of September to early November (Autumn) as the weather is warm and temperatures are very mild.

The church is accessible with the Chorus Pass. The admission fee to the church is €3.00 for individual entry and €9.00 on a cumulative ticket.