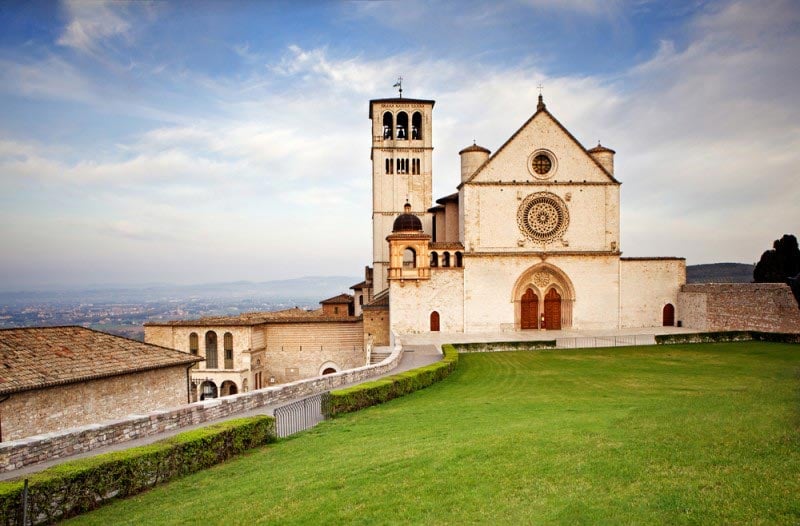 Basilica of St. Francis of Assisi in Italy

The Basilica of San Francesco d’Assisi (Basilica Papale di San Francesco in Italian) is an Italian cathedral located in the city of Assisi. This cathedral is the head, or mother church, of the Franciscan Order (the Roman Catholic Order of the Friars Minor). The foundation stone of the Basilica was laid after the canonization of Saint Francis on July 16, 1228, by Pope Gregory IX. The Lower Church was completed in 1230, after which Saint Francis was buried in the cathedral.

The Basilica of Saint Francis of Assisi consists of the Upper Church and the Lower Church, as well as a third level below, the Saint’s tomb, where the remains of Saint Francis are kept. The Upper Church’s interior is decorated in the Gothic style. Interior features include many frescoes from medieval painters such as Giotto di Bondone, Pietro Cavallini, Pietro Lorenzetti, and Cimabue, displaying a variety of Italian art from this period. Other decorative features include the Gothic doorway and ornate rose window, which has been called “the eye of the most beautiful church in the world.”

Following the destruction caused by two earthquakes that hit Italy on September 26, 1997, the Bascilica was closed for restoration for two years.

Where is Basilica of San Francesco d’Assisi?

The Basilica is located in Assisi, Italy, where Saint Francis was born and died. The city of Assisi is situated in central Italy in the region of Umbria, connected to major Italian cities including Rome via railway. The town itself is accessible on foot. The Basilica is located at a distance of just 13 km from Perugia San Francesco d’Assisi – Umbria International Airport.

Spring and summer are the high season for travel in Italy. Tourists should avoid Italy in August, when most of the locals head out of town for a vacation, and many parts of town are closed.