The Sweden flag is one of the national symbols of Sweden. The flag of Sweden was officially adopted on June 22, 1906. 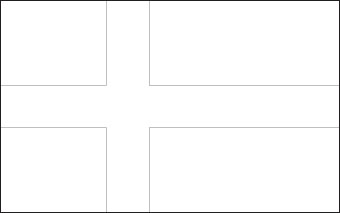 Download Picture of Sweden Flag Outline for kids to color

The flag of Sweden is blue with a yellow Scandinavian (or Nordic) cross, which stretches from left to right and from top to bottom across the rectangular flag. The intersection of the cross sits slightly to the left of center on this rectangular national flag. The blue represents truth, loyalty, and justice, and the yellow symbolizes generosity. The Swedish cross is said to have come from Eric the Holy, who was king of Sweden, who saw the gold cross in the sky. The cross is a symbol of Christianity, used to express the religious history of the nation and its early leaders.

History of the Flag of Sweden

Because the Swedish flag dates back to at least the twelfth century, sources surrounding the history of the flag are lacking. There are several theories as to the source of the colors and cross of the flag. The colors of the Swedish flag may reflect the colors of the royal coat of arms, dating back to 1275 with King Magnus Birgersson or that of King Albert of Mecklenburg in 1364. The royal coat of arms of Sweden dates back to 1442, and uses blue and gold. Some reports suggest that the flag was originally white, not gold or yellow, and it was changed around 1420.

The earliest known flags of Sweden are blue with a yellow cross, but rather than a rectangular flag, they were double-tailed flags, and soon after, triple-tailed flags.

The flag of Sweden’s design is based on the Danish flag, and may have been created in resistance to Danish rule. Each of the Scandinavian countries has a flag with the Nordic cross, much like the Swedish flag, demonstrating their common history and unity. In fact, with the union of Sweden and Norway in 1815, the flags of these two nations were, for a time, incorporated into one another to create a new merged identity.