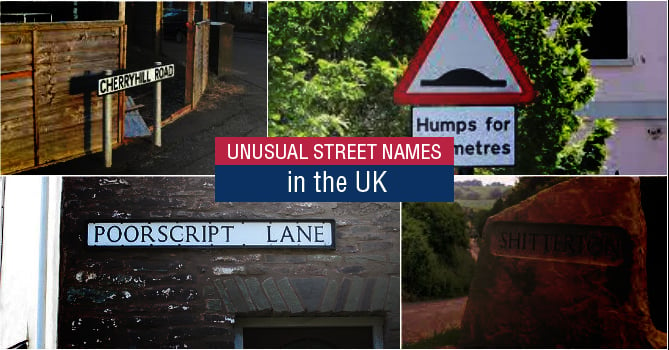 One look at a map of the UK and tourists will find a lot to smile at. After all, there are names such as Bishop’s Itchington and Westley Waterless. However, not many may know that these names have some history behind them as well. A number of towns in this part of the world have some interesting names such as Pity Me, which is located outside Durham. Shitterton is another location in UK that has a strange name. It is a small village located in Dorset and has Anglo-Saxon roots. The stream flowing through this village was once upon a time used as an open sewer and this is where the name comes from.

There is a good reason why the United Kingdom has such strange names in the first place and that is its chequered history which has seen the landmass inhabited by various races such as Celts, Romans, Anglo-Saxons, Scandinavians, and Normans at different periods of their history. The names of the streets and places across this North European country bear witness to that legacy.

Merkins Avenue and Washer Willy’s are two roads located on the border shared by England and Scotland. Buttock Point is another road with a funny name. It is located on the Isle of Bute. People who are visiting Herefordshire should keep their eyes out for Booby Dingle. Spankers Hill Wood is located pretty much near London. Blind Fiddler and Sally’s Bottom are two other places with silly names in Cornwall. With Clenchwarton and Barton Bendish, Norfolk is not one to be left behind in this department. In the Northeast of England you would find Bushygap and Manly View, which are not really well-thought out names in hindsight. At Peak District you will find Gusset and Ringing Roger.

Whip-Ma-Whop-Ma-Gate is a street located in York. It is assumed that the origin of this name lies in Norse language and probably means ‘neither one thing nor the other’. Ashby-de-la-Zouch was once referred to as ‘ash tree farmhouse belonging to the Norman de la Zuche family’ but it is a very English market town. This particular name points to the French influence on the names of certain places in Britain.

Funny names of streets in the UK

The following list provides the names of some of the funniest street names that you will see in Britain and also where they are located:

Incidentally, all the names of the roads listed over here started out as rather innocent ones. They were fully acceptable at the time when they were first conceived. However, with time, as the English language evolved, there was influx of American English and these names went on to assume some not-so-nice meanings and now find themselves on the lists of British roads with uncomplimentary names.