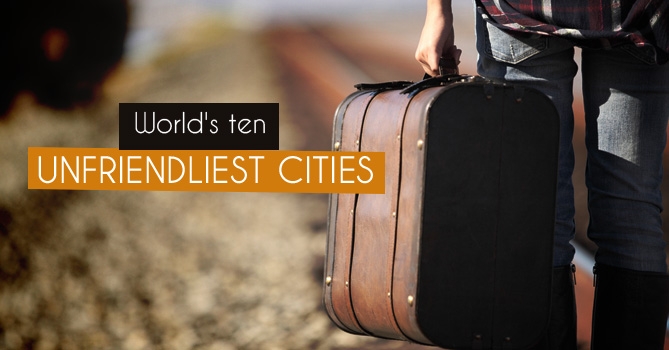 Planning to visit a glitzy city to spend your vacation? Well, then don’t just go by the glamour. A city may be cosmopolitan and has all the temptations for traveelrs, but what’s more important is to see how the city treats foreigners. According to a popular survey, some cities have been identified as less friendly. Here we bring to you the ten unfriendly cities in the world.

Moscow, the capital of Russia, is one of the top tourist destinations of the world in terms of its culture and landmarks. However, it also happens to be one of the unfriendliest cities of the world. The major problem that tourists faced with Moscow is its people, who were not supposedly as cordial and helpful as they expected them to be.

Atlantic City in New Jersey is the second least cordial city of the world. The city offers tourists the chance to indulge in gambling at casinos that perhaps do not compare to those in Las Vegas. The boardwalk in the city is also famous. Incidentally, Atlantic City was struck by Hurricane Sandy in 2012. The major problem according to tourists is the behavior of the people who are generally rude and more bothered with getting on with their own lives.

St. Petersburg invokes awe among tourists thanks to its architectural marvels such as the Marlinsky II Theater, a newer version, Church of the Savior of the Spilled Blood, which is striped with candies and is gilded, and Winter Palace, a frosty blue structure. However, once again it is the residents who have left the tourists wanting more.

Marseilles is the second biggest city in France and one with a working culture, which acts as a nice foil for the elite culture that one sees in Paris. Even though the city has been going through a revival in the cultural arena travelers have found it to be fairly rough and less organized. However, it is said to be more welcoming and relaxed compared to Paris.

Los Angeles, California may be one of the sunniest cities in the US but that warmth perhaps does not extend to its inhabitants. The city is filled with people who look good but believe themselves to be better than the rest or are trying to be someone they are not. Some visitors have also labeled them as unhelpful.

The capital of New York is a favorite of many tourists for its attractions like boiled bagels, the exceptional view of the city that one gets from the One World Trade Center, which has been constructed anew, and the Central Park. However, visitors to New York City have noted that people are not always the most cooperative or kindest to them. They say that it is perhaps better to find things on one’s own rather than ask the locals.

Philadelphia, Pennsylvania is referred to as the City of Brotherly Love but the sports fans over there are extremely partial in supporting their home franchises. A number of visitors have said how rudely local fans have behaved with them just because they were not supporting the home team. However, the city does have tourist attractions like Anne d’Harnoncourt Sculpture Garden and the commendable compilation of early modern art at The Barnes Collection.

Baltimore, Maryland, may be known as Charm City but of late several protests have badly affected the city’s tourism sector and a lot of tourists have professed disillusionment at the state of affairs in the city. However, it still has a number of tourist attractions such as Hippodrome Theatre, the famed blue crab, and Chesapeake Bay.

Las Vegas, Nevada is one of the leading tourist destinations of the world for its nightlife that never seems to end and its casinos. However, several visitors have observed a lack of depth, which does not harm the city’s reputation seemingly. Las Vegas is known more for its flamboyance as well as pomp and grandeur that appear to be seedy and vague at times to outsiders.

Cannes is home to the Cannes Film Festival, one of the most critically-acclaimed and glamorous ones of its kind in the world. The city is also rich and beautiful. However, tourists have said that it is apparently snobby as well. Several readers have also compared it to an aging beauty, whose charm is on the wane.