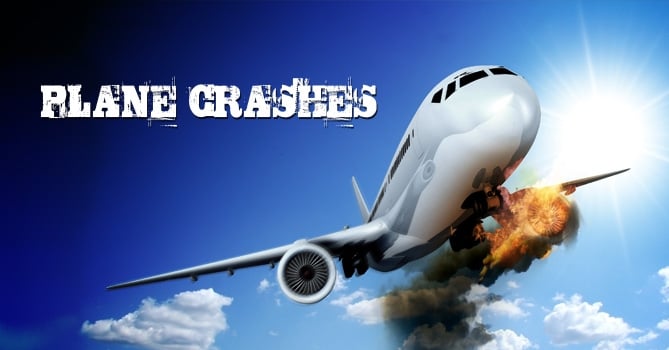 2016 has started on a bad note with the Tara Air plane crash in Nepal, one that has claimed the lives of all the 23 passengers on board. This includes a couple of infants as well. It happened on the morning of February 24 in the northern part of Nepal, which is well known for its mountains. Incidentally, it was only going to be a 19-minute flight. Bishwa Raj Khadka, the deputy police superintendent of Myagdi district, had stated that they had been able to recover 19 bodies but most of them were burnt so bad that they could not be identified.

The Shoreham Air Disaster was one of the worst of its kind and claimed 11 lives in the end. It happened on August 22 during an airshow that had been organized at West Sussex with a vintage Hawker Hunter jet crashing into an A27. All the people present over there were further horrified when smoke plumes followed the deadly nosedive. Reports have stated that the jet in question had been using parts that were outdated. According to the Air Accidents Investigation Branch (AAIB) the main problem was with the area in the vicinity of the ejector seats and it was this problem that contributed to the delay in the accident response.

This horrendous helicopter crash happened at Fox Glacier, New Zealand, and claimed the lives of everyone on board. It took place on November 21 when the said helicopter went on a tour to the glacier, which is at a far-flung location at South Island. Apart from the pilot Mitchell Gameren, who was from New Zealand itself, there were four other people from the UK and a couple of people from Australia. Gameren was supposed to be an experienced professional and on the fateful day he had been working for Alpine Adventures, an organization that specializes in glacier landings and scenic flights.

The crash happened on October 31 at Central Sinai. Just 22 minutes before the accident the plane had taken off from Sharm-el-Sheikh and was supposed to fly to St. Petersburg. Incidentally ISIS claimed responsibility for the crash that claimed the life of all the 224 people traveling on the same. Majority of the passengers on board were people from Russia who were returning after holidaying at Red Sea resorts. This is easily regarded as one of the most horrific of its kind in the history of Russian aviation.

The accident that claimed the lives of all 148 passengers on a Germanwings airliner named Airbus A320 happened on March 24. It happened at French Alps and the flight had taken off from Dusseldorf, Germany, and was heading to Barcelona. This incident surprised many considering the clear weather and an experienced pilot. The plane plummeted 38,000 feet in around 10 minutes, at a speed of almost 3400 feet each minute. Subsequent investigations have revealed that Andreas Lubitz, the co-pilot, was responsible for the accident. He was well known for being suicidal and incapable of working with.

The deadly crash occurred on August 16 with the Trigana Air Service Flight 257 coming down during a domestic flight in Indonesia. The flight was supposed to take only 45 minutes. All the five crew members and 49 passengers lost their lives in the accident. Even though the plane did not send out a distress signal, the Indonesian Ministry of Transportation accepted that the equipment used for air navigation in the country was outmoded and may not have been changed after the 1950s.

This preceded the Trigana crash and took place on June 30. The air crash killed all the 122 people on board as well as 22 others. The accident happened when the C-130 Hercules aircraft that belonged to Indonesia’s Air Force nosedived into a residential complex. The plane was ferrying members of the national armed forces and their families and clipped a tower prior to the crash. A witness said that plane made a loud sound before it exploded mid air. It then turned upside down and came crashing down, thus leading to five explosions. When it came down it hit three buildings causing a ghastly scene overall with huge flames and dead bodies spilling on to the streets.

Following are some other major airplane crashes that happened last year: