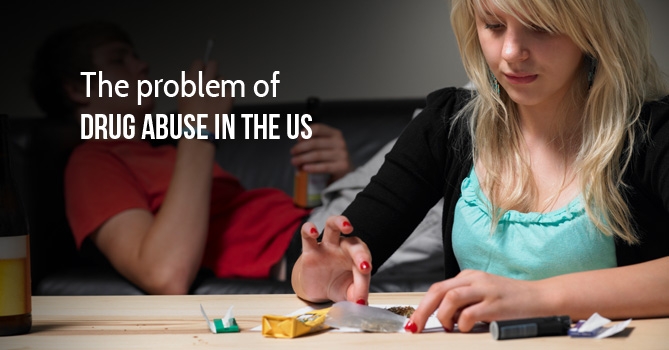 One of the major problems facing the U.S. at large is the illicit usage of tobacco, illegal drugs, and alcohol. Every year the U.S. loses more than $700 billion in criminal activities costs, healthcare, and productivity losses generated from instances of lost work. The healthcare costs have been estimated at $130 billion and its overall costs are $295 billion. Alcohol incurs healthcare costs of $25 billion a year and its overall costs have been estimated at $224 billion. As far as illicit drugs are concerned, the healthcare costs are in the region of $11 billion and the overall expenses are $193 billion.

How Many People Use Drugs in the U.S.?

It is estimated that the number of women using drugs in the U.S. is a third of the number of men who are indulging in the same. It has been estimated that almost 30-40 million people use drugs in the U.S. to various extents. Most of these people are casual users but there are also a sizeable number of addicts. It was found in 2014 that almost 27 million people in America had used illicit drugs and this included children as young as 12 years. Marijuana happens to be the most oft-used among the illicit drugs.

How and Why Do People Do Drugs in the U.S.?

The drug abuse situation in the U.S. is fairly grave with almost 1 in 10 Americans afflicted by some sort of drug-related issue. Now coming to the causes as to why people take drugs in the U.S., the reasons may vary from one individual to another but overall there are certain basic reasons for the same. People want to fit in their immediate circle and drug is perceived as a cool way to do it. At times, people either want to relax or escape from some reality or to relieve boredom. In certain societies using drugs also shows that one may have grown up and so a lot of youngsters take to this habit in order to prove their ascendancy in life.

At times, drugs are also seen as a way to rebel against authority like parents, school/college, etc. It is also used in order to experiment with something different at times. It has often been seen that when people suffer from problems such as anxiety, depression, bipolar disorder and any other mental problem as such, they take recourse to drugs. Quite often elders show the way for younger ones and drug use becomes a natural and sanctioned activity then. Quite often, there is a misconception that since a doctor has prescribed a certain drug overusing it will not be harmful. At times, injured people get addicted to prescription drugs. Drugs also help suppress painful memories and at times people are just in love with the high that they get from doing drugs.

Help for People Affected by Drugs in the U.S

In the U.S., the federal government provides all the help for people who need drug-related treatment. It is provided in various settings and a wide array of pharmacological and behavioral approaches are used for the purpose. There are at least 14,500 specialized facilities that deal with only drug issues. They provide services such as counseling, medication, behavioral therapy, and case management. Most of these services are provided at mental health clinics and physicians offices.

The providers in this case include healthcare professionals such as counselors, psychologists, physicians, nurses, psychiatrists, and social workers. Treatment is also provided in inpatient, residential, and outpatient settings. Under normal circumstances, certain settings have specific treatment approaches. However, in certain situations other therapy-related services and interventions can be brought into play as well. Considering the extent of effect drug addiction has on individuals and society in general, the governmental bodies – local, Federal, and state – provide most of the funding for treatment. However, health plans – subsidized by employers or other private entities – that provide coverage for drug-related treatment and the resultant care are also available in the U.S.

However, it has often been seen that managed care has not always yielded the best possible results since people have stayed for treatment for shorter periods and the coverage has also been insufficient at times to carry out effective operational procedures. It is expected though that the situation could be addressed by the recent efforts to bring insurance coverage for substance abuse and mental health at par with others.

Anti-Drug Laws in the U.S

The anti-drug laws in the U.S. strictly forbid possession, distribution, and manufacture of drugs such as heroin, cocaine, LSD, and marijuana. The laws are applied in a progressive manner, which means that the second offence is always going to be costlier than the first one. The maximum fines and imprisonment in case of possession, manufacture or distribution of drugs in the U.S. are normally in the region of $20 million and life imprisonment. However, in states like Alaska, California, Colorado, Hawaii, Maine, Nevada, Oregon, and Washington if someone can prove that he or she has, makes, or distributes marijuana for medical reasons then that individual cannot be imprisoned or subjected to fines.

Instances of Celebrity Drug Usage in the U.S

There have been plenty of U.S. celebrities who have died owing to overuse of some form of drug or the other. The most recent instance is that of Philip Seymour Hoffman who supposedly died from heroin overdose at the age of 46 in 2014. Cory Monteith, the 31-year-old actor and singer from the hit TV show Glee died from a poisonous combination of alcohol and heroin in 2013. Chris Kelly, a rapper for Kris Kross, died in 2013 at the age of 34 from a deadly overdose of heroin and cocaine. Celebrated singer and actress Whitney Houston died in 2012 at the age of 48 after she drowned following a heart-related complication that stemmed from years of cocaine abuse. Flexeril, Xanax, marijuana, and Benadryl were also found in her body but they did not in any way result in her death. These deaths and those of relatively-unknown people proves that the laws perhaps are not doing completely well and may be there is room for improvement.