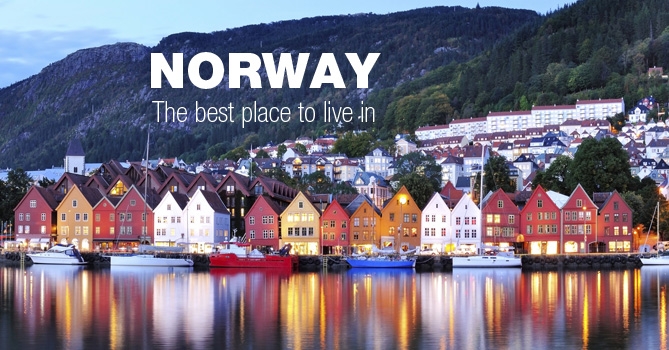 The United Nations Development Program has declared Norway to be the best place to live for the 12th straight occasion, which says a lot about the country. UNDP uses the Human Development Index in order to judge how well countries are doing and ranks them accordingly. In 2015, Norway scored 0.944 on the scale of 1, which is the highest number. Jens Wendel, who is in charge of the UNDP’s administrative department, has said that over the years Norway has been able to add to its income and also made sure that it is distributed almost equally among people, perhaps implying it to be one of the main reasons behind its ascendancy.

There are several other reasons as to why Norway is at the top position and has kept it for so many years. For starters, the national government pays for funerals and weddings of the people. Most of the state university colleges and universities in Norway are funded by the government. As far as the national government is concerned, it thinks that it is important that everyone has access to higher education and this is why the rules forbid these institutions of higher education from charging any tuition fees. This is also applicable for foreign students coming to study in Norway.

New dads in Norway get 12 weeks of paid leave at least and moms are allowed a year off with full payment, which is absolutely unheard of. The country has also barred cars in major areas and political advertisements are deemed illegal. It is also sensitive towards rights of homosexuals – homosexual marriage has been granted legal status since 2009 – and details about everyone’s salary are published by tax authorities each year. It also boasts of the largest sovereign fund in the year.

How is Norway better than Australia?

Australia, according to UNDP, is the second country on the list with 0.935. The first thing that Australia could probably learn from Norway is the state financing of funerals. In Australia, one can see frequent TV ads where people are asked to make financial arrangement for their funerals, in case no one else pays for it. Compared to Norway higher education in Australia is so costly that people need to take a loan and keep on paying it back as and when they find work. In Australia partners and dads are allowed only a couple of weeks of leave with full payment by the government. However, there are certain terms and conditions for being deemed eligible to receive the benefit. Australia’s major cities have too many cars and before the election it is usual to be flooded by political advertisements. Compared to Norway these are some areas where Australia can improve.

How is Norway better than Switzerland?

Switzerland is third on the list with an HDI of 0.930. It is at par with Norway in terms of natural beauty but it is a costlier location than the table topper. Switzerland has higher consumer prices, rents, restaurant prices, and groceries price. People in Norway enjoy greater purchasing power than those in Switzerland. The Scandinavian country has a comparatively lower unemployment rate as well. Norway also has a greater current account balance than Switzerland and it is also ahead in terms of value added to GDP by way of industrial production. It also has a lower percentage of government debt compared to Switzerland. Electric consumption in Norway is lower than Switzerland and there are lesser people living with AIDS. Infant deaths are also lower in Norway.

How is Norway better than Denmark?

With an HDI of 0.923 Denmark is on the fourth spot. There are some areas in which Norway has done better compared to its Scandinavian neighbor. In terms of unemployment Denmark has a 66.67% greater chance of people without jobs compared to Norway. The levels of income are also 31.77% higher in Norway. The rate of infant death is 65.32% more in Denmark. Life expectancy in Norway is 2.51 years more on an average than Denmark. The chance of contracting AIDS in Denmark is double of that in Norway and people enjoy 0.21% less time to spare.

How is Norway better than Netherlands?

How is Norway better than Germany?

Germany is on the sixth spot on the list with 0.916 points. Germany is one of the leading countries in the world in every sense of the term. However, there are some areas where it is trailing Norway. For example, chances of unemployment are 32.08% lower in Norway and compared to Germany people earn 40.25% more. The chances of infant deaths are 28.32% lesser in Norway and the chances of experiencing a class divide in Norway are 7.41% lower than in Germany. On an average Norwegians live 1.16 years more than Germans. Their chances of being imprisoned are 1.32% lower as well.

In a nutshell, all these countries are top names in their own right but as can be seen from the above data there are various social, health-related and economic issues that they need to take care of. Marginal improvements seem to be the order of the day and one feels that once they are able to achieve those they will be at par with Norway.