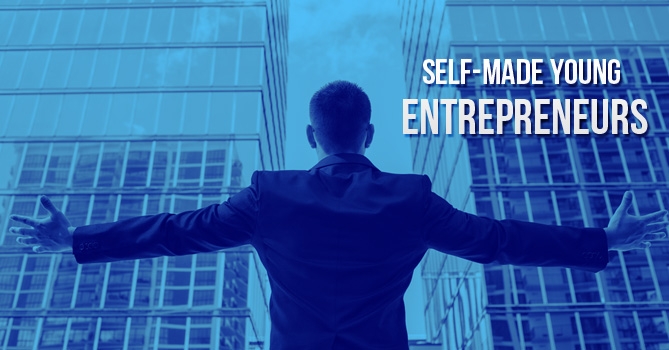 These days technology has made it easier for people to access knowledge and use it for various purposes. People in general, especially the young ones, are getting sharper and there are more individuals willing to catapult themselves to the riches and glory that everyone wishes for in life rather than wait for time and fortune to come and guide them. These people believe in making their own luck and their own name in the process. These precociously young, yet exasperatingly intelligent and industrious, individuals are living proofs of the idiom that it is never too early to start. All it takes is a great idea and a lot of hard work.

The name of Mark Zuckerberg comes to mind when one speaks of entrepreneurs who made it big early on in their lives. At the time when he was a mere college student Zuckerberg had become highly wealthy. The founder of Facebook is right now one of the richest people in the world with an estimated worth of $20 billion.

Qualls has founded the website WhateverLife.com. It was an original idea that came to her way back in 2004 when she was just 14 years old. Initially, the site was supposed to act as a showcase for her designing capabilities but it gained popularity when she started to provide MySpace layouts for free. She was offered $1.5 million as well as any car that she wanted but chose to decline the offer. At present her net worth is $4 million.

Brindak started her own business at the age of 10 by sketching characters and when she was 16 she came up with a social media platform to complement her activities. Her company, named Miss O & Friends is presently estimated to be valued at $15 million. Brindak gets majority of the revenue from advertisements.

Belnik kicked off his business – an e-tail shop – with around 600 dollars when he was 16- years-old. He started off with smaller products like trading cards and then slowly graduated to the likes of furniture. This was when his company BizChair.com was established and it basically proved that he had what it takes to be successful in the market. His net worth is expected to be approximately $20 million.

When Adam Horowitz was 15-years-old he threw himself a challenge – to make a million dollars by 21. This idea spawned the Mobile Monopoly, a site that provides tutorials on mobile marketing. He has been successful in what he wanted to do and presently earns in the region of a six figure income. It has been estimated at $1.8 million.

Koon was 16 when he started the first ever auto parts business in New York called Extreme Performance Motorsports. He entered an agreement with MTV for supplying products to be used in its reality shows and also put his connections to use for a fashion line with Young Jeezy. His net worth is already in the excess of $40 million and it is expected that he will become a billionaire pretty soon.

Johnson had earned thousands of dollars by the time he was 11 thanks to his ability to create greetings cards. This also gave him the impetus and platform to start his own business. His website SurfingPrizes.com is basically a toolbar service and earns in the region of $350,000 a month. At the time he was in the high school he was worth at least a million dollars. Right now he is worth at least $5 million dollars.

The brother and sister duo are the creators of MyYearBook.com, which is a top name in the domain of social media. It was their older brother who played a major role with an investment worth $250,000. Right now, the site is worth $100 million.

When he was 17, D’Aloisio created an app, which as per Yahoo was worth $30 million. The developer started work on coding when he was 12-years-old and this led him to come up with a news app. He says that he is able to spot market disparities and this is what got him started working on the app. Right now he is one of the youngest millionaires in the world with a net worth in the region of $30 million.

By the time he had reached the eighth grade Dikman had earned some proficiency in repairing computers and this led him to charge 15 dollars an hour for fixing a computer. The executives at Merrill Lynch were impressed by what they saw and Malcolm Taffe hired him before he was 15 years old. Soon, he started his own business of repairing computers named Cooltronics and later, went on to be a part of the 25 Under 25 list of Businessweek. Right now, his net worth is estimated at $3.7 million.

The entrepreneur from Scotland started off at the age of 14 by making homemade jams using the recipe of his grandma. When he was 16, his business – SuperJam – was doing really well. He took a loan of 9000 dollars upon being asked by a leading UK supermarket to stock his products and soon went on to become a millionaire. Nowadays his recipe books are available on Amazon. He is worth at least $2 million.

CaptainSparklez is a well-known pro gamer and started his journey with how to videos, which he posted on YouTube. He soon grew his business with a channel that offered a lot of detailed instructions related to various facets of gaming. He is worth in the region of $8 million and is also regarded as one of the top earners on YouTube at present.

Dunlop was dyslexic as a child and told by his teachers that he would never attain success in life. This caused him to leave studies at high school. Soon he went on to find IncomeDiary.com, which presently has a rating of 12,000 on Alexa and he is said to earn in millions. He is well known for his precise business advice and is worth in the region of $5 million.