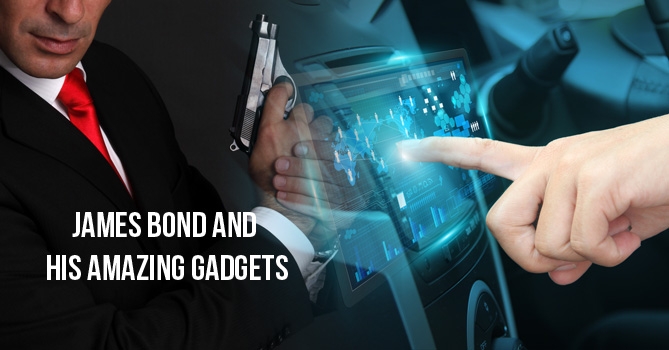 Over the years, gadgets and cars have been integral parts of the James Bond experience. Many who have seen Casino Royale will remember how Daniel Craig as James Bond used a defibrillator to come back to health after his martini was poisoned by the villain’s henchwoman or how M kept track of him by inserting a chip in his arm. Till date there have been some strangely-ingenious gadgets used by 007. These include a camera that can act as a Geiger counter, a wristwatch that can also operate as a video camera, and a cigarette that is capable of firing projectiles. In a nutshell, Q – the weapons-smith of MI6 – has been bending the laws of physics and logic with his inventions over the years. Die Another Day, made in 2002, is especially notable in how it pushed the limits of technology, and in that regard is taken as one of the worst offenders.

As anyone may have observed Bond’s gadgets have changed with the various passages of the Cold War. Even as time wore on the gadgets became more detailed and more secret, and at times a bit too much outlandish. However, in the last few films it is seen that screenwriters have graduated to more reasonable options. There is more sense and the approach is more minimalist. Previously, the gadgets Bond used would define him but now they just complement him. It is pretty evident that Bond does not have to depend any more on gadgets in order to survive. In the late 80s Bond movies saw greater usage of technology. In the 1987 film Living Daylights, a wireless phone and night vision goggles were employed by Bond, making it the first time such devices were used in a Bond film.

Development in Modes of Transport

The Q division has been able to fit Bond with some flabbergasting transport devices. Sean Connery’s Bond uses a personal jet pack in the 1965 film Thunderball in order to escape at the right time. In the 1967 film You Only Live Twice he uses a one-man helicopter in order to destroy four military-grade helicopters. Incidentally, the helicopter had been built using parts from four huge suitcases. His luxury cars too have been equipped with all kinds of devices such as missile launchers and have been shown to be capable of submersion as well.

Bond also gets to wear the best watches. They are capable of recording movies, printing messages, cutting rope, detonating explosives, throwing fire lasers, and showing high-definition videos. They also played a significant role in the plots of the films made in the 70s and 80s because people could not be bothered about watches no matter which brand was being worn. So, they served a fantastic purpose as weapons with futuristic applications.

In the 1980s, PCs became more central to Bond gadgetry. In the 1981 film For Your Eyes Only, a device named Identigraph was used in order to gather together features of various faces and then scan them into a database with the aim of identifying criminals. The Seiko G757 that Bond used in Octopussy (1983) could be regarded as a predecessor to the Apple Watch. It was fitted with a liquid crystal television – a technology unheard of in those days. In fact, the importance of personal computing could be gauged from Never Say Never Again, a Bond film made in 1983 and not a part of the traditional Bond franchise, where Q laments that people had become absolutely dependent on computers for all their decisions. Considering how important these gadgets were to the franchise this could be regarded as something of a meta-humor.

A View to Kill, made in 1985, featured a droid that resembled one used in the Star Wars franchise, and according to Q was supposed to be an exceptional surveillance machine. The same movie also features a discussion on the growing importance of technology including circuits integrated using silicon and how they were becoming integral parts of computers at that time.

The 1995 film Golden Eye represented a major leap of sorts with people shown using computers that are used nowadays. These computers had colored user interfaces and the desktop monitors were pretty big as well. In the 1997 film Tomorrow Never Dies, a GPS encoder was the central part of the storyline. It was capable of making one country assume that warship of another country was trespassing in its waters. This film cautioned one and all about excessive dependence on technology much like what happened in the Terminator film series. It also showed how threatening hacking could be, a theme that was repeated in Skyfall (2012) as well.

The Bond villains too have been known to use technology to their advantage or at least want to do so. In A View to Kill, Christopher Walken essayed the role of Max Zorin – an industrialist with issues of mental balance – wanted to blow up the Silicon Valley so as to gain a greater foothold on the global chip industry. So, in a sentence it can be said that Bond films have a significant space for depiction of advanced technology and the main characters are liberally allowed to use the same. It’s only that now the dosage is becoming agreeable to one and all members of the audience who have made the franchise what it is.