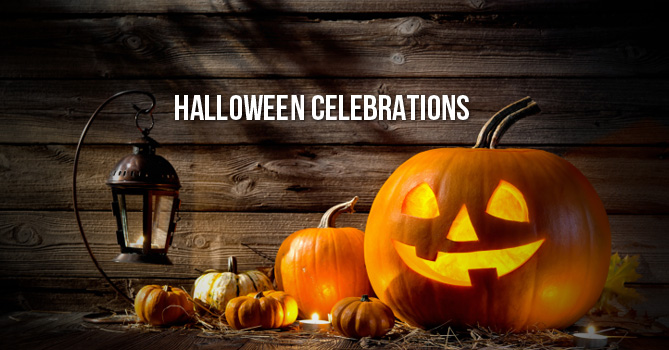 The meaning of Halloween

Allhallowtide is basically the occasion in a liturgical year when the dead are remembered. This includes all martyrs, saints, and every faithful believer who has left this earthly abode behind in death. All Hallow’s Eve uses the themes of ridicule and humor in order to deal with the powerful force that is death. The word Halloween (Hallowe’en) was used for the first time in 1745 and is said to have originated within Christianity. The word basically means holy evening or hallowed evening. The Scottish word All Hallows’ Eve is also said to be the etymological source of the word.

The festival of Halloween is said to have Welsh and Gaelic influence. The costumes that we get to see these days being worn in Halloween are supposed to have been borrowed from folk beliefs and customs prevalent in nations that spoke the Celtic language or its derivatives. Some of these countries, at that time, followed various forms of paganism and in others Celtic Christianity was the main religious tradition. A folklorist named Jack Santino says that in Northern Ireland this was a sacred religious practice. However, in Ireland the situation was a little different.

Santino says that here there was a kind of uneasy truce between people who had taken up Christianity and ones who had been following religious practices that existed from the times when Christianity was yet to arrive in Ireland. Nicholas Rogers has also tried to find out the origins of this festival. He has said that some folklorists have stated Pomona – a Roman feast held in the honor of the deity of seeds and fruits – and Parentalia – a festival held for the dead – to be the source of Halloween. However, Rogers says that Samhain, a Celtic festival, can be regarded as the source of Halloween.

The word Samhain is derived from an Old Irish word that means the end of summer. It used to be the initial and most crucial among the four quarter days of the calendar followed in the medieval Gaelic period. It was primarily celebrated in Ireland, the Isle of Man, and Scotland. It was celebrated for two days – 31 October and 1 November. The Brittonic Celts also held a number of important festivals in the same period. For example, Calan Gaeaf was celebrated in Wales and Kalan Gwav was celebrated in Cornwall. In Brittany, people celebrated Kalan Goanv.

How is Halloween celebrated?

Trick-or-treating is one of the most easily-identifiable cultural practices of Halloween. This practice is also related to guising. In this festival costume parties are held, which people attend in large numbers in their own costumes. People also carve and then decorate pumpkins into jack-o-lanterns. People also light bonfires, bob apples, and visit places that have some fame as a haunted location. People also like to play pranks on their near and dear ones, watch horror films, and narrate frightening stories. In various parts of the world different religious observances are held in order to commemorate the festival.

People attend church services and light candles on graves. These are in fact the most popular ways to celebrate this festival. In other parts of the world, these somber rituals have given way to modes of celebration that are more in keeping with the secular and commercial ways to look at religion and celebrate it these days. In most of the denominations that fall in the group called Western Christianity it is required that meat is not eaten on this day. This though is not a binding obligation as such. This has in fact led to the tradition where only certain kinds of vegetarian dishes are consumed on this day.

The above mentioned list includes apples, potatoes, colcannons, pancakes, ciders, and soul cakes. UNICEF has paid its respects to the festival by organizing a fundraising activity named Trick-or-Treat for UNICEF. As part of this program humanitarian aid is made available to children who belong to the developing countries.