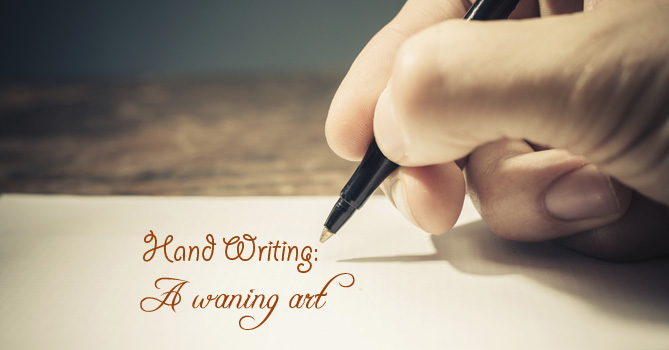 “Keyboards have always intimidated me…A pen is a much more primitive instrument. You feel that the words are coming out of your body and then you dig the words into the page.”

When American author, Paul Auster spoke thus of the superiority of the pen to the keyboard, he perhaps did not realize that he was part of a steadily declining cult of writers. Writing as a whole is becoming a dying art form. Writing with a pen is all but extinct. The more advanced our technology grows, the less inclined we seem to write. We have slowly allowed phone calls, digital messages, and electronic communications replace our letters, postcards, and handwritten notes.

Of all the lost forms of writing, letter writing is now almost a thing of the past. For those who enjoy reading the letters written by Napoleon to Josephine and by Robert Browning to Elizabeth Barrett or even letters written by famous leaders such as Mahatma Gandhi, Martin Luther King, and Abraham Lincoln, consider that the world may not benefit from such masterpieces due to the advent of e-mails.

Author Philip Hensher wrote in the Wall Street journal, “We have definitely lost something here, and those Skype, email and text exchanges won’t be treasured in the way that my teenage letters, scribbled journals and postcards have been for years.” And indeed we have. What are the chances of treasuring and repeatedly reading an e-mail communication? How many e-mails are likely to make history?

According to the US Postal Service, letter writing has seen an unprecedented decline in recent years and this is “primarily driven by the adoption of the Internet as a preferred method of communication.” It is undeniable, though, that e-mails and texts lack the personal tone that a handwritten letter or note has.

Language As We Know It

“Love demands everything and that very justly – thus it is to me with you, and you with me”

This is what Beethoven wrote in his letter to his Immortal Beloved. Now, picture Beethoven writing this –

You get the drift.

The advent of text messaging and micro blogging sites made each letter precious. Vowels were the casualty. Not only did we start to routinely drop vowels, the birth of acronyms made textese a language by its own right. Oh my God became OMG, Bye for Now became BFN and even emotions and actions that could never be communicated by words such as laughing out loud and shocked now became LOL and :-o. And in this crossfire, language was lost. According to an American research survey, students between the 6th and 8th grade are much more inclined to text than other ages and this is the group showing a steady decline of grammar and spelling scores. Also, people who text often, are less likely to learn newer words or enhance their vocabulary much.

The Memorial to Essays

Till even a couple of decades ago, essay writing was considered a mandatory part of school coursework. The famous essays of Gorge Orwell or Virginia Woolf were read and reread by enthusiastic writers. These days, with shortening attention spans, writing essays is a thing of the past. Short web articles, Facebook posts, and e-posters have replaced lengthy expositions. The humor, wit, and literary finesse of writers such as Jerome K Jerome stand to be lost in the days when one-liners seem to reign supreme.

The memorial to essay writing may not be a very positive sign for higher education, though. Some of the premier colleges, universities, and institutions of higher education weigh their admission heavily upon a supplemental essay. Some of the important American universities that require applicants to write an application essay include Stanford University, University of California-Berkeley, University of Chicago, Princeton University, and Yale University among others. We may do well to revive our essay writing skills for the sheer pleasure of understanding an exposition and the flow of thoughts encases in literature, even if we are not considering college admissions.

The advent of e-mail is dated back to 1972. The world has, since then been taken in with paperless communication. Recent years, however, have seen this trend to spill over and affect anything and everything to do with writing. More and more schools across the globe are opting for tablets and mobile devices over old fashioned books and pens. Developing good typing skills has become far more important than good handwriting.

To say that writing is dying a slow death is not very true. The death is a fast and speedy one. So much so that all traces of paper may soon be gone. While this is certainly good tidings for an environmentalist, we cannot but rue the fact even something as simple as invoicing will soon go all digital. Denmark is the first country in Europe, and perhaps, the world to do away will all forms of currency and go cashless. EU directives have prompted more and more nations to adopt digital invoicing practices.

Even something as innocuous as writing a prescription is set to go paperless. Norway, the Netherlands, and the United Kingdom have become the top three countries in the world to move towards digital prescriptions.

Those familiar with Harry Potter and his adventures through J K Rowling’s books are very well acquainted with Rita Skeeter. And her famous, nay infamous, Quick-Quote Quills. Wait, did you just look up the dictionary to find out what a quill is? If you were born anytime after the 80s you just may have.

While your grandmother’s favorite memory may have been learning to make clean strokes on paper with different colored inks and a fountain pen, the current generation has all but forgotten this writing device. While even a decade ago expensive fountain pens were considered a status symbol, the modern entrepreneur may consider a lack of pens a status symbol. A quote from the movie Duplicity, describes the situation rather well. In the movie actor Paul Giamatti says “Who the hell writes with a fountain pen anymore?”