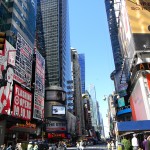 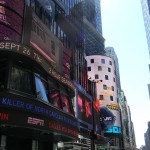 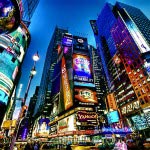 One of the most iconic attractions in the world, Times Square has become a symbol of the bustling city and thriving culture of New York. Named after the newspaper ‘The New York Times’ following the shift of its headquarters to the square in 1904, Times Square is now a major entertainment center, home to television studios, businesses, and hundreds of bright flashing billboards.

Times Square is the most visited tourist attraction in the world, with about 40 million annual visitors. Every year since 1907, hundreds of thousands of people have gathered in Times Square on New Year’s Eve to watch the crystal ball drop at the strike of midnight, ushering in the new year. The square installed an energy-efficient LED ball in 2008. Today, millions of people flock to the square, and many more watch the celebrations on the annual New Year’s Eve television special.

Some of the electric, neon and illuminated sign boards include:

Times Square has everything for an entertainment buff:

You name it and they have it at Times Square. The restaurants at the square serve sumptuous food to both the theater-goers and Broadway performers.

Cuisine served at the restaurants:

Shopping options at the square include:

Some of the prominent fashion stores at Times Square are American Eagle, Levi’s, MAC, Billabong, Forever 21, Disney, and Quicksilver.

The entertainment options at Times Square are numerous. The options ranging from comedy to movies, musical performances, and nightclubs attract people of all age groups. You may enjoy a rock show at the Roseland Ballroom or Best Buy Theater; or may choose to view Madame Tussaud’s collections. If you are adventurous, you may visit Ripley’s Believe It or Not.

Attending a Broadway show is another exciting option.

You may plan an event at Times Square or participate in any of these events that are conducted here: 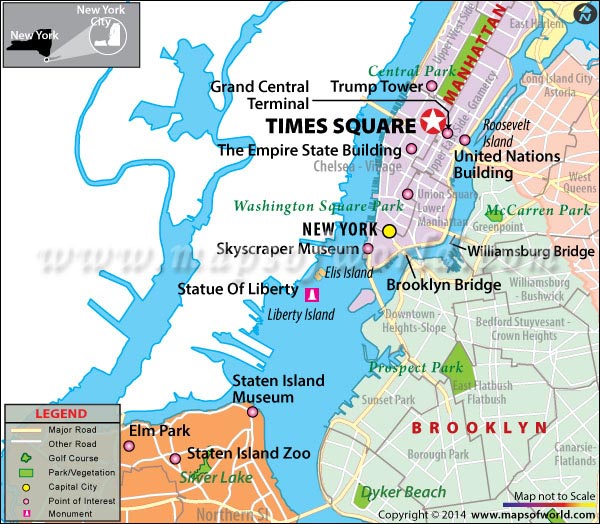 Where is Times Square located?

Times Square is located in New York City’s theater district, at Broadway and Seventh Avenue from West 42nd to West 47th. Times Square is sometimes referred to as the Crossroads of the World for its location and significance as a cultural hub. You can either ride the bus, take a taxi or the subway, or even walk to Times Square.

The city that never sleeps is a great place to visit any time of year and any time of day. Early morning visitors can catch a recording of Good Morning America, and late night visitors can see Times Square lit up in all its glory. New Year’s Eve is the biggest night of the year for Times Square, but the loads of people make it much too crowded.