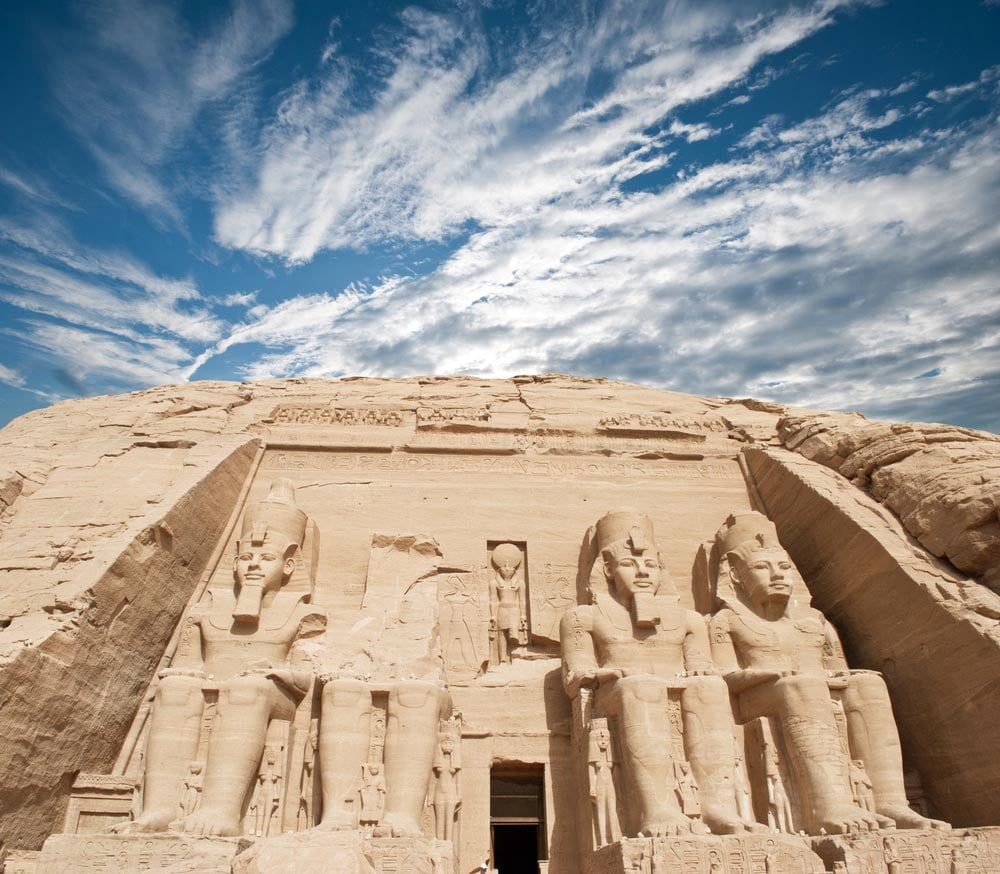 The temple of Abu Simbel in Egypt.

Abu Simbel is a village located in southern Egypt and is home to the two Abu Simbel temples, which are made of rock and are situated on the western bank of Lake Nasser. The site is recognized by the UNESCO to be a World Heritage Site and has been named the “Nubian Monuments”. Because of their historical significance and threat of rising waters from the construction of Aswan High Dam UNESCO sponsored a program for their removal and reconstruction. The operation, which began in 1964 and continued for as long as four years, resulted in the dismantling and raising of the temples over 60 meters up the sandstone cliff where they had been originally built about 3,000 years ago. The different stages of the removal operation can be seen through photographs inside the man made dome.

The construction of the temple complex began in approximately 1264 BCE and took nearly 20 years. The temples, however, fell into disuse with time and remained covered in sand until 1813, when Swiss orientalist Jean-Louis Burckhardt discovered the top frieze of the main temple. Burckhardt shared his discovery with Giovanni Belzoni, an Italian explorer who succeeded in his attempt to enter the complex in 1817.

The Great Temple at Abu Simbel was dedicated to the gods of Amun-Re, Re-Harakhte, Ptah and Ramsis II. Its considered to be the grandest and the most beautiful in Egypt.

Where is Abu Simbel?

The archaeological site of Abu Simbel is located about 290 kilometers from Aswan in the southern part of Egypt along the Nile.

It’s necessary to avoid the midday heat while visiting the sights in Egypt located along the banks of the Nile River. Abu Simbel is located in southern Egypt, which is even hotter than Cairo. Weather is a deciding factor for most people, who plan their trips to Egypt and efforts should be made to visit in the winter when the temperatures are generally mild (November to February).

The temples are open everyday from 6am till 4pm in the winter (Oct – Apr) and from 6am until 6pm in the summer (May – Sep).

The entrance fee for the temples is around 80 Egyptian Pounds (approx 13 USD). Many people leave to go to the temples around 3am in order to catch the morning sun. You could choose to visit the magnificent temples by a minibus or a flight depending on your budget and preference.

The Places nearby are : Luxor Temple, Valley of the Kings, Karnak Temple, temple of Medinet Habu