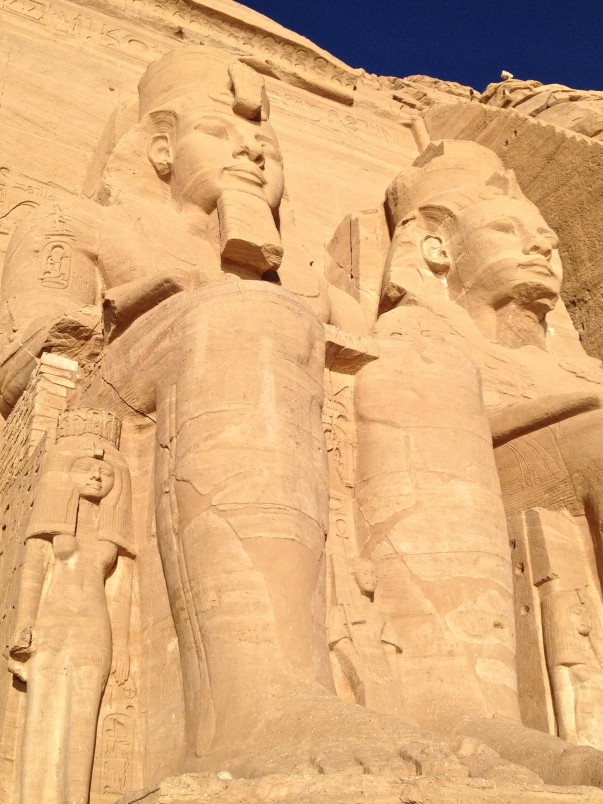 The mammoth facade of the Great Temple at Abu Simbel cuts an imposing figure against the stark desert landscape.

The mammoth monuments that are the temples of Abu Simbel were hidden to the world until Johan Ludwig Burckhardt came across the site in 1813 and discovered a portion of a temple facade covered over the centuries by sand. Four years later, Italian explorer Giovanni Battista Belzoni visited the same place and was able to locate the entrance door.

Since then, poets, writers, and historians have waxed lyrical about the awe-inspiring structure erected by Ramses II around 3000 years ago. The entrance to the Temple of Ramses II features four giant statues carved out of the mountain itself, each standing at 65-feet tall and portraying one of Egypt's most famous pharaohs. His mother Tuya, his wife Nefertari and some of his children can also be seen in smaller scale at his feet.

The monument is dedicated to the gods Re-Horakhty, Amun, and Ptah, as well as the divine Ramses himself. Inside, the temple is fairly conventional in its design. The first hall features eight Osiris pillars in two rows. On the left, the statues show Ramses wearing the white crown of Upper Egypt while on the right he is wearing the double crown of the Two Lands.

The most remarkable feature of the site is that the temple was built in such a way twice a year, on February 22 and October 22, the first rays of the morning sun reach along the entire length of the temple to shine light all the way to the back wall of the farthest shrine.

The second temple at Abu Simbel lies towards the north of the Great Temple and is similar in plan but on a much smaller scale. It was built in honor of Ramses’ Great Wife Nefertari. This temple marks the first time that a queen was depicted alongside her husband and on such an equal platform. For visitors, it gets you thinking about the personal relationship between the pharaoh and his Queen. Visits to other temples and shrines primarily showcase the power of a pharaoh but this provides a more romanticised look at life in Ancient Egypt.

It's not just the immense scale of the two temples at Abu Simbel that leaves you dumbstruck. Their removal and reconstruction were a historic event in their own right. When the temples were threatened by submersion from Lake Nasser because of the construction of the High Dam, the Egyptian Government along with UNESCO launched a worldwide appeal to save the ancient monuments.

The salvage operation began in 1964 and continued until 1968. An international team of archaeologists, engineers and skilled heavy equipment operators carried out the relocation, which came at a price tag of $40 million. The process saw the two temples dismantled and raised around 190 feet above the sandstone cliff. They were then reassembled, in the exact same position to each other and in relation to the sun, and covered with an artificial mountain. There's a small exhibition of photographs at the site that highlights the different stages of the project, which to some can seem as amazing as the monuments here themselves.