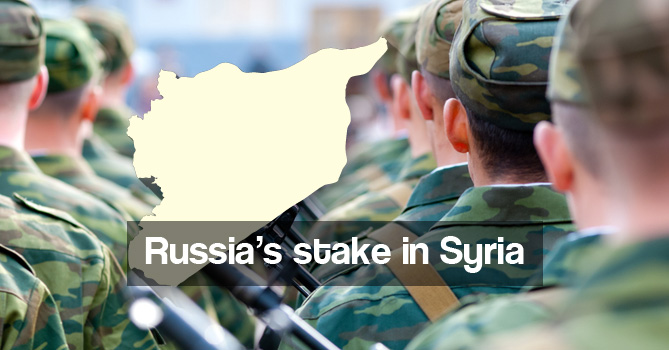 After its futile attempt in Afghanistan in the 80s, Syria is the next major country outside its region where Russia has got involved in military conflict, ostensibly to protect Russian interests. So what is the Russian endgame here?

With international prices of crude oil at record low levels, coupled with economic sanctions imposed on it on account of its intervention in Crimea and Ukraine, Russia can ill afford to get embroiled in yet another costly conflict unless the gains outweigh the costs. So what’s at stake here for Russia?

Vladimir Putin wants to bring Russia back to playing a role in geopolitics and needs to retain its only Naval base outside its region located at Tartus in Syria. Built in 1971, the Tartus naval facility has served as a maintenance and supply base for the Russian Black Sea Fleet and holds strategic relevance for Russia, given its location.

Putin has been engaged in establishing closer economic and strategic relations with China as a counter measure to increased US-led NATO presence in its region. China realizes that sometime in future there could be a convergence of strategic interests with Russia in the Middle East region, and at point, the Russian presence at the Tartus naval facility could be useful.

In order to retain the facility, Putin needs Assad in office and has China’s support on this. The problem is that the Syrian situation is complex with too many players with vested interests directly or indirectly involved. Assad’s forces control a small part of Syria and are bogged down trying to battle FSA and allied groups on one side, and the much dug-in ISIS on the other.

Though not an immediate problem, Turkish and Iraqi Kurd groups control certain border areas in north Syria. These groups are fighting for an independent Kurdistan, which is not favored by Turkey, Iraq or Syria.

The political negotiations between FSA-led rebel groups, representatives of the Syrian government, and mediators are currently underway. Vladimir Putin realizes that holding onto Assad may prove counterproductive in future and to hedge its bets, it has been making statements that it would respect the will of the Syrian people and support any leader they choose.

Bashar al-Assad is confident that the rebel groups will not find support from a large section of people, including minority groups, who still believe that only he can offer some semblance of stability and security. But Russia is not taking any chances and is believed to be engaging with the FSA through back channel talks to see if it could find support as and when Syria stabilizes and initiates a process towards a permanent political solution acceptable to all sides.

Russia recognizes the deep-rooted Shia-Sunni divide and has been supporting Iran in its unlikely role as a counter to ISIS. ISIS, a Sunni Muslim group, has the possible support of Saudi Arabia, Qatar, Kuwait and other GCC states, while Iran has emerged as a key player in combating ISIS in Iraq and now in Syria.

In a reflection of shifting strategic interests, Iran now has tacit support from the US-led coalition to take on ISIS; however, any gains made against ISIS in Syria will mean a direct gain for Assad and therefore, a lesser chance for the FSA-led rebels groups to offer a political alternate to Assad. And this is good news for Russia that is hoping to retain and further strengthen its Naval presence in Syria.

It is with this objective in mind that Putin has gambled on getting militarily involved in Syria despite a stressed economy back home. But if the conflict in Syria drags for an extended period, then Russia could find itself caught in a situation from where withdrawal would come at a price. Is Putin ready for that?

Russia is hoping to strengthen the Russia-Iran-Syria-China relationship and finds that it could re-emerge as central player in the Middle East on the back of this emerging coalition. And the situation in Syria is central to Russian plans going forward.