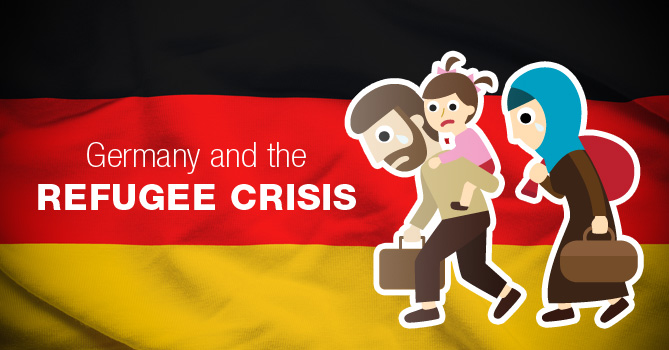 For someone who has just won the 2015 Time Magazine ‘Person of The Year’ award, Angela Merkel finds herself in a corner, caught between the responsibility of holding the European Union together on side, and, continuing her policy of allowing more refugees to flow into Germany and EU, on the other.

From the time the refugee influx from Syria into Europe graduated from being a concern to a crisis, Angela Merkel has been leading the voice for a ‘humanitarian’ approach to the issue. As a politician in the international arena, she has often been accused of being reticent went it came to taking hard decisions, but one has to hand it to her for having stood her ground on this critical issue that could well impact the future of Europe as a whole, going forward.

Germany has been the most sought after destination for refuge from the time migrants first started landing on the shores of Greece and Italy, and now the country finds itself divided whether to continue the policy of open door or cap the number of refugees into Germany, and let the rest of EU spread the balance amongst themselves.

The debate has not been restricted to within Germany alone. Countries like Hungary, Serbia, Poland, Macedonia and Romania are refusing to accept any refugees at all, and from the ones they do allow, Muslims are certainly not the preferred.

Winning her third term as German Chancellor in 2013, Angela Merkel has been riding a popularity high having successfully guided Germany through tough years of global slowdown. That position has been seriously threatened ever since the refugees from war zones of Syria and Iraq have been arriving by the hordes.

Merkel has taken the lead on addressing this real crisis and has been facing severe criticism from colleagues in her party, the Christian Democratic Union (CDU).

Bavarian state premier Horst Seehofer has been a vocal critic of her open door policy on refugees. Merkel has been openly refusing to put a cap on refugees flowing in and said that Germany was capable of dealing with the situation, provided other EU countries did their bit. Despite her active diplomacy to bring other EU member states on board, most have been reluctant in allowing a free flow into their states.

In 2015 alone, Germany has received well over a million refugees and had offered to accept 10 million, a significant number when compared to what other members of EU offered thus far. However, the Paris attacks on 13-14 November this year changed all that, not just for Germany but for all EU members as well.

Countries like the US, along with France, Austria and Spain, that have been offering their support to Angela Merkel’s initiatives and policy on refugees, are now under severe pressure within their own countries to review and restrict the number of refugees entering their respective countries. Merkel, who earlier had strong voices of support from EU member states, now finds herself pushed to the corner to revisit her open door policy and review her offer of accepting 10 million refugees into Germany.

Recent opinion polls in Germany show her popularity ratings nosediving, with over 60% Germans favouring a restriction to the inflow. The CDU’s youth wing has been vocal on raising the voice against Merkel’s open door policy on refugees and had called for the government to review the same.

CDU is under pressure as the party faces general elections in 2017 and unless Merkel can find a way to address this problem quickly, the party will find itself struggling to support her policies on refugees, going forward.

In the immediate future, CDU faces a serious challenge in early 2016 when the state parliamentary elections come up in Baden-Württemberg, Rhineland Palatinate and Saxony-Anhalt regions, and CDU members fear that the current policy on refugees may trigger increased support for the right wing Alternate to Germany party. That would be disastrous and Merkel realizes that.

In her recent address to over 3,000 CDU party delegates, Merkel refused calls to put a cap on refugees that Germany will accept and also turned down suggestions to build any border fencing to control the inflow. However, she has been forced to back down from her earlier stand and stated that she was open to considering a lower number and also consider some form of border controls, if necessary. This led her to get a standing ovation from party members who seem pacified, at least for now.

Angela Merkel has called for increased support to countries like Turkey, who are providing shelter to over two million refugees. Germany has provided Turkey €3 billion in aid and has called for other EU member states to do more. She has continued to push her earlier line of extending humanitarian support but has also called for tougher measures in securing sea facing borders from Greece to Turkey that have been a gateway for the refugees.

French President Francoise Hollande is under pressure to increase border control measures and restrict the flow of refugees into France. The same with US President, who is facing severe criticism from members of the Republican party as also his own, to restrict the number of refugees from entering.

UK has been maintaining a hands-off policy believing it to be a continental problem, while most East European countries like Hungary, Romania and Poland are refusing to accept the quota formula for accepting refugees.

This will only increase Germany’s problem in finding a solution that is acceptable to all. Angela Merkel has staked her reputation as the leading humanitarian voice within EU, however, the Paris attacks have put her leadership and diplomatic skills to test.

Germany is supporting the peace talks currently being brokered between conflicting groups in Syria, and is also backing the Saudi-led Arab coalition to jointly fight ISIL and terrorism, in general. How these initiatives pan out will influence how EU deals with the refugee crisis in 2016 and beyond.