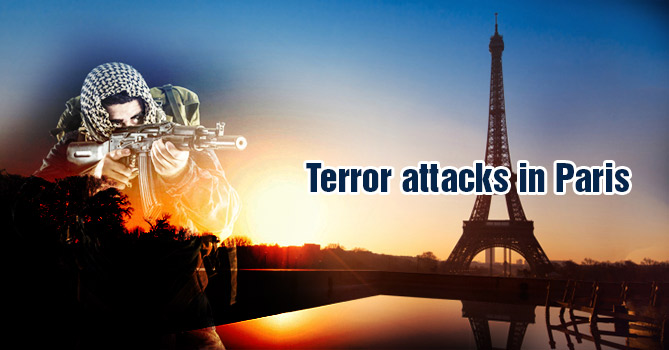 Over the past decade, the world has seen many dark nights of terrorism soiled by innocent blood. The night of November 13, 2015, was one such night of horror in the history of France. Through the evening of November 13 right into the early hours of November 14, a series of coordinated shootings and blasts ripped through Paris, the capital city of France. As of early November 14, 158 people have been reported dead in these incidents, though this number may go up as over 200 people are reportedly injured, a number of them critically wounded.

A Night of Terror
Even as most of the Parisians were enjoying a stimulating soccer match between France and Germany, terrorists armed with AK-47s and bombs attacked 7 different sites of the French capital plunging the nation into grief. The first attacks were on two restaurants – Le Carillon (18 Rue Alibert, 75010 Paris) and Le Petit Cambodge (20 Rue Alibert, 75010 Paris), both in the 10th arrondissement of Paris. Having shot and killed people at café Le Carillon, attackers crossed over to the Cambodian restaurant and shot at people there. They then fled in two vehicles, eyewitnesses said.
Next came three suicide blasts in cafes and populated places around Stade de France, the soccer venue where French President Francois Hollande and about 80, 000 other spectators were watching the France-Germany match. The President was safely evacuated. Later, after the match, the spectators were gathered on the field and allowed to leave following standard evacuation procedures. The bloodiest of the attacks was on Le Bataclan, the very popular 19th century variety theatre, which is now a popular rock concert venue. Hundreds had gathered here on November 13 evening to see Eagles of Death Metal, the American rock band. Four gunmen opened fire at the crowd at the Bataclan theater and as the injured fell, they were shot dead at close range. As the Parisian police stormed the theater in an attempt to salvage the situation, the terrorists detonated bombs that were strapped to them. The resultant explosions are believed to have killed at least 118 people. Shots were also reportedly fired outside the La Belle Équipe bar (92 Rue de Charonne, 75011 Paris).
Other shootings were reported – one in Les Halles 9 central Paris), and again at Le Pompidou and Louvre. These reports seem to be false, though.

Emergency Declared
French president Francois Hollande was quick to react to the situation. In a midnight television address to the nation (which was broadcasted worldwide) he said, “This is a horror.” Following an emergency cabinet meeting the president said, “A state of emergency will be decreed, which means certain places will be closed, traffic may be banned and searches may also take place throughout Paris”. And thus for the first time since World g II, the entire French capital remains in curfew. The Paris metro, buses, schools and universities, public offices will all remain closed on Saturday. A few emergency services including medical services will remain open. All police personnel on leave were recalled and about 1,500 army personnel were drafted to ensure security of the city while investigators comb the city for leads about the blasts. Parisians have been warned to stay indoors and not venture out. President Hollande also cancelled his upcoming trip to the 2015 G-20 summit at Antalya. Foreign Minister Laurent Fabius and Finance Minister Michel Sapin are likely to attend in his stead.
Another major development is that the borders of the country have been sealed temporarily to prevent the perpetrators from escaping. Later, after visiting one of the blast sites, President Hollande vowed, “We will lead a merciless war against terrorism”.
The initial hours following the blast were tense but the city has risen in an unprecedented show of brotherhood and cohesion against terrorism. People opened up their homes to fellow Parisians who could not get back home and French cab drivers offered free rides. Parisians took to Social Media to offer and seek help in these dark hours.

Who is Responsible for the Attacks?
As yet it is unclear who the terrorists are or which terror group is behind these attacks. What is known with some level of certainty is that there were seven or eight terrorists involved in the attacks and all of them are believed to be dead. The French intelligence services and Parisian police are looking for accomplices and other clues about them.
Unsubstantiated eyewitness reports seem to suggest that the terrorists might belong to Islamist militant (terrorist) outfits. Eyewitnesses have suggested that before firing at the Bataclan theatre, one of the terrorists cried out “For Syria” while another screamed, “Allahu Akbar” (‘God is Great’ in Arabic). Also, it is suggested that the execution of the felled concertgoers was signature jihadist style. Understandably, French authorities do not want to pin the blame on any group

without substantial proof. Investigations are on and we can only pray that victims and their families find justice.

International Response
The international community was shocked at the development in France. US President Barack Obama called President Hollande to offer condolences. Various heads of European nations strongly condemned the attacks. Germany has offered the services of its German special forces in investigation and in maintaining national security. The Holy See from Vatican has strongly condemned the attacks and the inhuman atrocities.