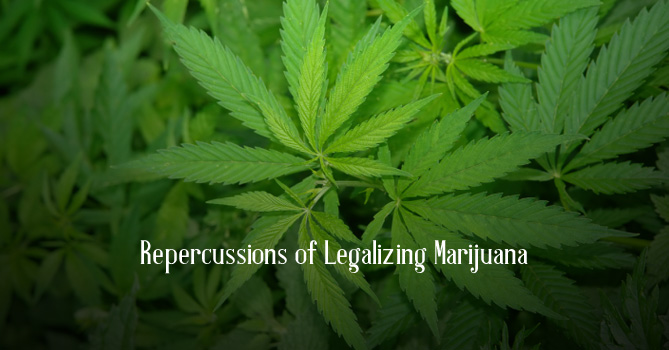 One important topic facing policymakers in the U.S. right now is legalizing the usage of marijuana. The opinion poll of various states on this issue seems to be divided going by the fact that Ohio has already stated it will not legalize marijuana usage, while California may do so in 2016. There are several other states that will look to give their backing to the usage of this drug. However, before we reach a consensus regarding the same it is important that some idea of effects of legalizing this drug is formed.

Colorado has legalized marijuana as early as 2012 and in that respect it has been a trailblazer of sorts for the other states in the U.S. In a recent interview, Tom Gordon, who serves as the Director of a program named Rocky Mountain High Intensity Drug Trafficking Area (RMHITA), has stated that his program – sponsored by the federal government – has been studying the results of legalization of marijuana. He has termed the results to be less-than-palatable. The body has released a report in September detailing the said results. In the report it has been found that following legalization the usage of marijuana has increased by 200% among young and adult individuals.

The usage has also increased in the age group 12-17 years, a critical age in every sense of the term. Incidentally, Colorado permits the sale and use of this drug only for recreational purposes. Gordon states that this is expected considering the government has made it available en masse to the people through legalization. The report has also found that traffic deaths arising from usage of marijuana have increased by 92% from 2010 to 2014.

One of the practical problems that could arise, according to certain sections of people, from the increased use of marijuana is that police officers may find it harder to arrest drivers who are using marijuana and perhaps thus putting a lot of lives in danger on the roads. One of the major reasons in this case is the absence of a roadside test for the drug. Under normal cases, if the drivers are found to be driving in an inebriated state a case of driving under the influence is registered against them. The police officers are not at all concerned about taking a drug test since they know that there is no separate law for such offense. This also means that there are more inebriated drivers on the street using the drug than the authorities know. Gordon says that the most problematic situations in such contexts arise when drivers have been using both alcohol and drugs.

Gordon has suggested that in case officers suspect that people are DUI then they should ask for drug recognition experts to be brought into the fold. He has also stated that the next logical step would be to use blood tests. However, such tests cannot be conducted without the agreement of the motorist. He states that it is also hard to convict drivers who use drugs.

People Going Away Scot-Free In spite of Excessive Usage

Quite often it has been seen that people have tested positive for drug usage over the legal limit of 5 nanograms of THC for each milliliter of blood. However, when they have produced in court they have stated that they do not get high since they use marijuana on a regular basis for health-related reasons. According to Gordon, this is an illogical reason, yet one that judges agree to on a ridiculously regular basis.

Smoking in the Open

In Colorado charges can be brought against drivers if they are caught drinking in the open. In case of marijuana, people can smoke inside their cars at the rate of an ounce for each person inside the car. However, as Gordon says, a car is regarded as a public place, and smoking at a public place is forbidden in Colorado. So, people who are caught smoking marijuana in their cars can receive citations and they may have to cough up some fine. However, presumably, with legalization this may not happen anymore.

As Gordon says the main idea behind introducing the legislation was to do away with the black market but as can be seen now the whole state itself has become the black market itself. Everyone over 21-years-old in the state has the legal right to grow plants and harvest the weed. More often than not, people say that they are growing more for their near and dear ones while in reality they are doing it for money. This is also the reason that many people are now taking this up.

Denver right now has a greater number of medical centers exclusively selling marijuana than pharmacies. Gordon says that one can actually smell weed in the air. The situation is a lot different than several other neighboring states where marijuana is illegal and therefore costlier. As and when marijuana is legalized more people will be selling it to interested customers across the country.

Dependency on Marijuana will not Increase

There is no definite proof that suggests that legalizing marijuana will increase its use. In some states it has decreased as well. It has been observed that most people who use marijuana don’t do other drugs. In the last 10 years the number of people dependent on marijuana has not gone up.

No Bad Health Effects if Used as an Adult

It will Not Increase Chances of Cancer

Preclinical studies have shown that using marijuana does not increase chances of contracting cancer. Since marijuana is regulated its THC levels tend to vary significantly.

A Lot of Diseases May be Cured

Marijuana can help in curing the symptoms of many medical issues. Marijuana can have some effect on one’s driving though. With legalization people will be able to buy it in greater numbers and thus help themselves in certain situations. However, the effect is too subtle to notice and depends on the amount consumed.

Racial Minorities Will be Less Affected

Every year in the U.S. almost 750,000 people are put behind bars for possession of marijuana and other related crimes. Most of these people belong to the racial minorities. So, if the drug is legalized then at least people will not get arrested for using it.

The Liberal Government of Ontario has said that its recent move that allows medical users to smoke the drug anywhere in the province will be re-examined. As per reports, this week, medical marijuana users were exempted from a law that banned the use of e-cigarettes in places where smoking is not allowed. This meant that they could smoke anywhere.