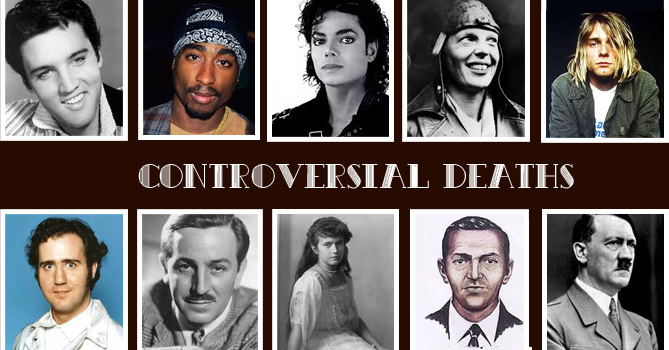 Elvis Presley, the King of Rock and Roll was one of the musical icons of the world during his time. This American great breathed his last on August 16, 1977, after indulging in prescription drug abuse for several years and thus affecting his health badly. It is often believed that Presley falsified his own death since he had made all the music that could have been possible for him and he was no more interested in leading the life of a performer. Some people also say that he presently lives in a subterranean home from where he operates as a Federal agent. This home is supposed to be located hundreds of feet underneath Graceland, a property owned by him in Memphis.  It is also said that from this lair he visits Las Vegas during vacations and it is really hard to spot him given the slew of people over there who impersonate him. If he were really alive, he would be 80 years old now.

The rapper-actor from the U.S. who’s All Eyez on Me is regarded as one of the highest seller among hip hop albums, was professionally known as 2Pac. He was shot in Las Vegas, Nevada in the intersection of Flamingo Road and Koval Lane on September 7, 1996, and died on September 13. It is often stated that a fake drive-by shooting had taken place and Shakur now lives in Honduras from where he is supposed to work as a lyricist for well-known rappers and ghostwriter of poetry books. If he were alive, he would be 44 years old now.

For a man who needs no introduction Michael Jackson died in rather mysterious circumstances. The King of Pop’s life was highly controversial but his impact on music is beyond any doubt whatsoever. He passed away on June 25, 2009. The official reason for his death is a heart attack that was brought about by medicines that were meant to treat him. When he died he was getting ready for the ‘This is It Tour’, which would comprise 50 shows between July 13, 2009, and March 6, 2010. It is believed by lot of people that he was sick and tired of being in the headlines for wrong reasons and being targeted for any wrong that he may or may not have done. As a King of Pop he lived a life that many could only dream of but there were the inevitable fluctuations as well. It is said that he now lives at a remote location and in a relaxed state of mind as criticisms and controversies do not reach him. If he were alive, Jackson would be 57 years old now.

A famed author, Amelia Earhart was a pioneering name in the aviation scenario of the U.S. as well. She was the first lady to have flown across the Atlantic Ocean and also supported the Equal Rights Amendment. However, she disappeared on July 2, 1937, when her plane supposedly exhausted its fuel and came crashing down near Howland Island in the vicinity of the Central Pacific. At that time she was trying to circumnavigate the globe using a Lockheed Model 10 Electra that had been funded by Purdue. There are a number of theories regarding her disappearance. It is said that she was hiding at Tangiers, Morocco, and later on went on to become the well-known actress Estelle Getty.

Kurt Cobain was the real deal as the frontman of Nirvana, the inventor of grunge rock. He was highly adored by his fans and so the news of his death by suicide in 1994 was something of a shock. Strangely enough, no autopsy was done and the only shot of his dead body never shows his head, which may have been damaged beyond repair because of the impact of the shotgun, with which he shot himself at point blank range. Conspiracy theorists state that he may have staged his own death in order to get away from the music business and perhaps Courtney Love as well. If alive, he would be 48 now.

There are several theories regarding the death of Hitler. The most oft-propagated one is that he shot his wife and himself and then their ashes were spread at River Elbe. However, it is also believed that the couple may have staged their deaths and ran away from Germany. Joseph Stalin had stated that Hitler may have escaped to Spain or Argentina. It is also believed by many that he was aided by Germans in his escape. Ever since his death, he had been reportedly seen several times. In 1954, a doctor had stated that he treated Hitler for an intestinal problem. It is also touted that he was staying at the US. Even if he did not die in 1945 he may be dead by now considering that he would be 125 if alive now.

DB Cooper is the unidentified individual who had hijacked a Boeing 727 on November 21, 1971. The plane was flying between Seattle and Portland. He even extracted approximately $200,000 as ransom and then leapt out of the plane in a parachute. Detailed investigations were carried out but neither his identity nor he could be properly located. It is said that following his escape he lived with Todd Snider, a songwriter and singer. This is perhaps one reason as to why Snider wrote a song in this name. He supposedly kept a low profile in order to avoid identification by cops. If alive, he would be 87 years old now.

The death of Anastasia Romanov is regarded as one of greatest instances of conspiracy in the 20th century. Princess Anastasia was the youngest of all siblings. Her father was Nicholas II, the overthrown emperor. During July 1918, the local Bolsheviks forced the family to go down to the basement of a home, where they had been holed up and then shot them. After the shooting was over they threw the bodies away at a location that is yet to be known. Since the bodies could not be found it is commonly believed that some members may have been lucky enough to escape the killings and flee Russia. Eventually, it was determined that Anastasia was the only one to have escaped.

During 1922, a lady named Anna Anderson proclaimed that she was Princess Anastasia, only to be proved false by posthumous DNA tests after her demise in 1984. The whole incident was made into a film named Anastasia. The actual princess’ remains were discovered by Russian scientists in 2008 and it was conclusively determined that she was indeed dead.

The iconic animator and entertainer Walt Disney was a heavy smoker, who refrained when in company of children. He also hid his medical issues from popular media and this is why when he died of lung cancer in a hospital on December 15, 1966, there was a certain degree of shock to proceedings. Immediately after his death a Disney employee made a prank by circulating the news that his dead body had been cryogenically frozen and kept below Pirates of the Caribbean, then a popular ride at Disneyland. Diane, Walt’s daughter, responded to the controversy saying that her father had indeed been cremated on December 17 and his ashes had been spread at the Forest Lawn Memorial Park, Glendale, California.

Andy Kaufman was a well-known actor, comedian, and entertainer in the U.S. He was a famous prankster and often joked about faking his own death. He announced in 1984 that he had cancer but no one believed him. He passed away on May 16 that year but a number of fans did not believe that as well waiting for the star to reveal that it was all a hoax. On May 19, 2004, a press release announced that Kaufman was alive but it was revealed to be a prank by one of his fans. In recent times, another lady falsely claimed to be his daughter. If alive, Kaufman would be 66 now.