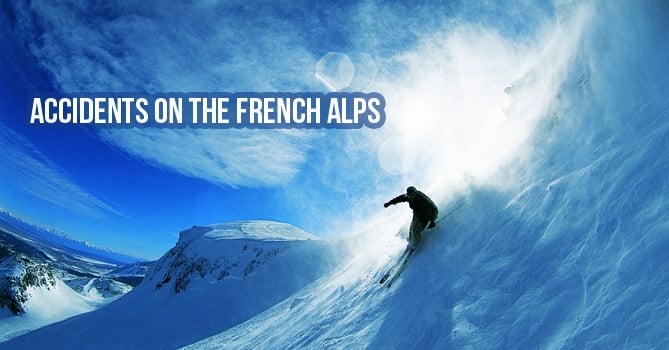 The majestic French Alps is a sight to behold, one that a traveler will cherish for a lifetime. Towering massifs with snow-capped peaks, crystal clear rivers, glossy lakes and undulating passes cast a spell on the traveler tempting him to come back again and again. But the French Alps is not always as rosy and heavenly as it seems.

There’s something unforgiving about the Alps. People get seriously injured on the French Alps if they take it too lightly. There have been a number of accidents on the French Alps, some involving common people and some celebrities. Some of these accidents have been due to people taking things for granted, while others due to nature’s fury. Let’s take a look at some of the accidents that have taken place on the amazing French Alps.

It was a painful start for a group of schoolchildren on an excursion to the French Alps. If the party of young schoolchildren and their teacher had heeded to instructions, the accident would not have happened in the first place. A group of 19 students and three adult staff from Lycee Saint-Exupéry school in Lyon were undertaking a ski course in the French Alps. The tragedy occurred when an avalanche came tumbling down on a closed black run at a resort in the region. A 16-year-old girl and a boy from the school party were killed in the accident. The teacher and other students sustained injuries. What baffled investigators was a simple question: what was the party doing at the slope at a time when it had been closed as the avalanche risk was three on a scale of five?

British Teenager Dies on the French Alps While Skiing: December 2015

it’s another case of a precious life lost for not taking notice of warning signs. 17-year-old Louis Ross decided to spend the last year of 2015 on the French Alps. The teenager had headed to the amazing locale for an exciting skiing holiday. However, a tragedy befell him when he met with an accident on a slope in Meribel. The tragedy could have been well averted had the teenager, who was going at an incredible pace, noticed a warning sign asking skiers to slow down ahead of an intersection. The teenager lost balance and smashed into the slope. Though he was wearing a helmet, he sustained injuries on his face and also suffered internal injuries in his chest. Rescuers found the teenager in a state of cardiac arrest and despite multiple attempts at resuscitation, Louis Ross could not be saved.

The parents of Carwyn Scott-Howell must have lamented their decision to spend their skiing holidays in the French Alps. Seven-year-old Carwyn got separated from his family in Flaine, a resort located in the Haute-Savoie region. An alarm was raised for the boy and emergency rescue operation was pressed into service that found him lying at the foot of a cliff. But there was nothing the emergency team could do to save him as he had died instantly from the fall. It is not clear as to how Carwyn came to be alone on the slopes and there are some conflicting reports. While some reports say that he had got separated from his parents, others suggest that he had asked to ski alone on the final run of the day and headed in the wrong direction.

Probably one of the high-profile accidents to have occurred in the French Alps is that of the motor-racing legend Michael Schumacher. Schumacher, who was less than a week short of his 45th birthday, was skiing with his son in the French Alps when the tragedy occurred. He was crossing an unsecured off-piste area – Piste Chamois and Piste Mauduit – when he fell hitting his head on a rock. It was claimed that Schumacher was trying to help a friend who had fallen in the snow. Despite wearing a ski helmet, the car racer suffered a severe head injury. His physicians later said that it was the helmet that saved Schumacher’s life. In 2014, it was reported that Schumacher was paralyzed and confined to a wheelchair. He also had problems in restoring memory and could not speak.

There have been a few other deaths reported in January 2016. In the first week of the month, a Czech skier was killed at Saint-Colomban-des-Villards. The skier went off piste in the Les Sybelles area. On January 3, two mountain climbers from Lithuania were also killed in an avalanche above Argentière in Chamonix. On January 5, two skiers, while skiing off piste, were killed in two separate incidents. They were both found buried in up to 150cm of snow.

What Leads to Accidents on the French Alps?

Most of the incidents reported above show that many accidents have much less to do with nature’s fury than the recklessness and devil-may-care attitude of skiers who throng this region to indulge in the exciting sport. Some of the accidents would not have occurred had the skiers heeded the warnings, checked with the weather department or taken note of the signs on the way that asked them to slow down as there was danger ahead. The nature of the sport is such that, at times, excitement overtakes rational thinking leading to accidents.

But human carelessness does not absolve nature of the role it has played in some of the deaths on these majestic mountains. The French Alps receives heavy snowfall and though people in large numbers head to the region to enjoy snowfall, it does have its own risk. Avalanches are one of the prime reasons. They contribute a fair share of human tragedies.

In September 2015, the French Alps witnessed one of its deadliest avalanches in a decade killing seven people. In the same year, six people were swept away by an avalanche in the Queyras range. Just two months after this incident, three people were killed in the Écrins massif. A layer of snow got separated and tumbled down the hill.

Though this should not deter enthusiasts from indulging in the exciting winter sport, exercising caution and giving proper attention to warnings can ensure safety.