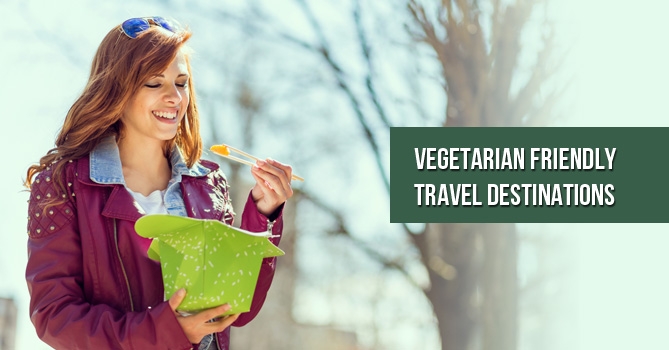 Justin Timberlake singing “Bring It on Down to Veganville” may or may not be your idea of entertainment but there is no denying the fact that the growth in vegetarianism and veganism across the world in recent years has been quite surprising. If you are vegetarian, though, you may face a number of sleepless nights about your food options when you plan to travel. Here are 10 of the most vegetarian-friendly travel destinations of the world.

India is the holy grail of vegetarianism. Almost throughout the country you are likely to find vegetarian restaurants. About 20 percent of the country’s population is vegetarian. And among the rest, most people go meat-free of different days of the week for social or religious reasons. Almost all the meat serving restaurants and eateries serve separate vegetarian dishes as well. Food labeling is clear too. You are likely to have a great deal of trouble if you are vegan, though. While meat consumption in India is the lowest in the world (about 3.2 kilograms per person annually), dairy consumption is very high. Most foods include some form of milk, curd, cream, cheese (paneer), butter, or even clarified butter (ghee).

Well, the British surely do love their fish and chips but the United Kingdom is one of the friendliest travel destinations that a vegetarian is likely to find. According to latest reports, about 12 percent of all adults in Britain follow a vegetarian or vegan diet. This figure goes up to about 24 percent when according to one news report the market for meat-free food products in the UK is pegged at about GBP 657 million (2014). London is thoroughly cosmopolitan and finding a vegetarian restaurant should not be tough. Ireland too has a number of vegetarian restaurants and cafes to choose from.

Singapore is the culinary capital of the world. Every cuisine that you can dream up of, you are likely to find here. Given the large Tamil Hindu, and Buddhist population in this country, Singapore is full of vegetarian outlets. According to some reports there are over 250 vegetarian outlets in this tiny nation but there are a number of options for vegans as well. The restaurants that are most likely to provide you vegetarian options are south Indian, and vegetarian/vegan cafes. In restaurants that serve meat do specifically ask for all-vegetarian dishes. Many Singaporean eateries add fish paste or oyster sauce to vegetarian dishes.

This may come as a surprise but Ethiopia may be one of the friendliest vegetarian destinations you travel to. Most of the locals belong to the Ethiopian Orthodox Church and follow its injunctions including the one about going meat-free on Wednesdays and Fridays. Vegetarianism is a perfectly acceptable choice on other days as well. If you aren’t sure your food is vegetarian (referred to as ‘fasting food’ for obvious reasons) ask for the Injera (a sourdough thin bread) which is eaten with the Bayenetu (meat-free platter) or with Shiro (chickpea dish). If you grow bored of this try the vegetarian spaghetti in tomato sauce served in almost all restaurants in Ethiopia.

Quite like Singapore, neighboring Malaysia too has a considerable proportion of Indian and Buddhist population. Landing some delicious vegetarian fare is thus not very difficult. Like India, most parts of Malaysia are famous for street food and small eateries; if you are indulging in some of the yummy street fare do check if the broth is vegetarian, though. Little India in Kuala Lumpur is the best destination for tourists seeking vegetarian dishes. Do try the Nasi Lemak, a coconut flavoured rice that is considered a national dish in Malaysia. Mie goreng, char kway teow and a number of dishes are served with vegetables.

When travel to Jamaica is mentioned, is Jerk Chicken the first thing that comes to your mind? What most travelers overlook is that most Rastafarians from Jamaica follow a strict Ital diet. Consuming the meat of any dead animal goes against the idea of Lival (life energy) central to the Ital philosophy. This means that there are a number of vegetarian and even vegan restaurants and eateries to choose from in Jamaica. Kingston and Negril are two places that are unlikely to fail vegetarian tourists. Try the local favorites such as Ackee (fruit) rice, salads, vegetable stews, callaloo, and curried beans apart from the varieties of vegetarian pizzas available here.

Taiwan is another favorite tourist destination for vegetarians. Almost about 10 percent of the country’s population is vegetarian and thus finding a restaurant or eatery that will cater to your vegetarian diet is pretty easy. In fact, Taiwan is a great place for vegans to visit as well. Apart from the strong Daoist and Buddhist influences, Taiwanese diet is also a result of an active campaign by the government encouraging vegetarianism. The number of vegetarian restaurants in Taiwan is estimated at about 6000. Store bought foods in this country are also clearly labeled making choices easier for the vegetarian traveler.

When someone suggests you travel to Switzerland do you think beyond the cheese and chocolates? You should, because Switzerland is one of the best destinations for vegetarians to visit. The Swiss are obsessed with organic food – you will find the best of fruits and vegetables here. Also, most restaurants offer vegetarian food. The only downside to your trip to Switzerland may be the fact that like most other things food is very expensive in this country.

Hold your breath, we have a surprise – Israel! Israel is not only a very vegetarian friendly tourist destination, it has been ranked the “vegan capital of the world”. Now how did that come about? There are about 300,000 vegans living in Israel. Traditional food served in the country such as the tabbouleh, hummus, falafels, pita bread, and babaganoush are all vegetarian. Get rid of your myths about all meat diets in Israel, visit this historic country, and indulge in some excellent Mediterranean fare.

If you thought Israel’s presence in this list was a surprise, think again. The country best known for the Bratwurst and some 1500 other types of sausages is also among the friendliest destinations for vegetarians – Germany. According to recent reports Germany is home to about 7 million vegetarians. The introduction of exclusively vegetarian and vegan dishes into the beer and meat Oktoberfest is proof enough that the country has caught the wind of vegetarianism, though it is far from the end of the average meat-loving German. And you thought you’d have to survive on beer in Germany?