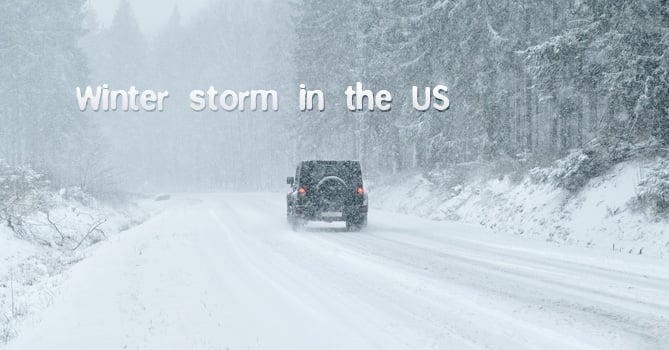 Americans can now heave a sign of relief as the massive snowstorm (Winter Storm Jonas) that struck the nation over the weekend is now over. The past two days have been tough for Americans as the storm, which struck many parts of the Eastern Coast of the United States, led to 29 deaths, shutting down of schools and offices, disruption of air services, power outages and Americans being holed up in their homes. It has been estimated that more than 85 million Americans were affected by the storm.

The Winter Storm Jonas, which is the largest snowstorm on record for several locations in the East, strongly impacted the Central and Eastern United States. It has been estimated that the historic blizzard within only a few hours dumped some 102cm (40in) of snow in places.

The impact of the snowstorm

As news began to trickle in that a massive snowstorm, considered one of the worst – was on the way and was expected to hit much of the eastern coast of the United States over the weekend, people began to make preparations to survive through the tumultuous weekend. The storm did lead to some panic among people and the first to realize this were the people who ran the supermarkets and grocery stores. In a matter of time, the shelves were left bereft of essentials such as bread, eggs, meat, milk, fresh produce and any other item that would help them sustain the storm.

As the government began to take measures to protect lives and property, the arrival of the storm threw life out of gear and led to a few deaths. Most of the deaths reported were from car accidents on icy roads. In all, 29 people died including a teenager who was sledding behind an all-terrain vehicle and died upon being struck by a truck, a transportation worker in Kentucky who died while plowing highways and two people in Virginia died of hypothermia.

Transportation virtually came to a stop as around 5,569 flights were cancelled over the weekend (Saturday and Sunday). The storm also led to power outages and it was reported that over 150,000 people were left without power. Nearly 65,000 customers were affected in the Carolina.

Life in the cosmopolitan city of New York came to a halt with a travel ban being in effect in the city and Long Island on Saturday. The area rail services, city bus service and above-ground subway lines were also halted. Entertainment was also curtailed with all Broadway performances being cancelled.

Major traffic jams were witnessed in West Virginia, Kentucky and Pennsylvania. From Friday afternoon till Saturday morning, for nearly 19 hours, some drivers were stranded along a 35-mile stretch of Interstate 75. In Washington, a traffic ban remained in effect and the entire metropolitan system closed through Sunday. As per the U.S. Office of Personnel Management, all federal government offices were to remain shut in the Washington area on Monday. The local government offices and public schools in the District of Columbia and its Maryland and Virginia suburbs were also to remain shut.

The storm comes to an end

The storm after wrecking havoc for two days finally made its departure and is heading towards the United Kingdom which it is expected to be hit on Tuesday. With the threat of the storm over, authorities began re-opening roads, transport services and airports on Sunday. People could also be seen clearing their homes and surrounding areas of snow. Many people in East Coast could be seen on Sunday clearing out pathways of snow and digging out their cars.

On early Sunday morning, travel bans were lifted in New York City (where snow stopped at 10 pm on Saturday) and Baltimore. With the working week to begin the New York’s Metropolitan Transportation Authority has said that in a bid to cater to the morning rush almost all of the public transport services will be running on time. New York City public schools will also reopen on Monday.

However, in the US capital, Washington D.C., people have been warned to be ready for delays as an extremely limited metro, rail and bus service will run. Drivers were urged to keep off the roads by Mayor Muriel Bowser so that the authorities could clear major arteries.

Meanwhile with the snow over, people returned to the streets with pictures showing people having fun and indulging in selfies in New York’s Times Square and skiing in front of the Eisenhower Executive Office Building in Washington, while taking advantage of the snow a few also decorated the snowman.