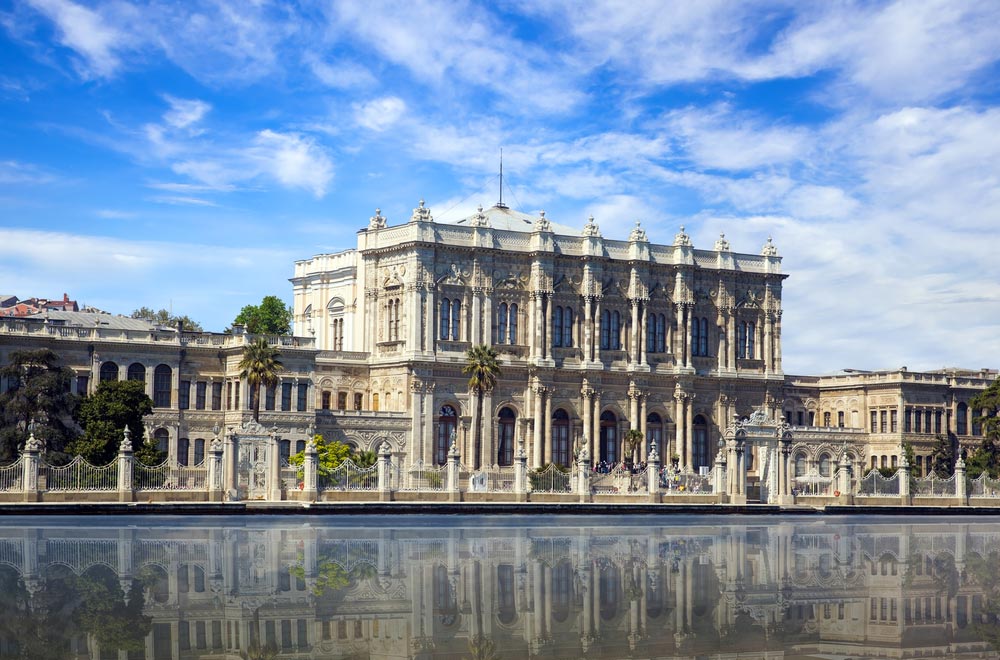 Set amid gardens boasting luxuriant vegetation, the Dolmabahçe Palace in Istanbul, entertained six sultans at intervals. Between 1856 and 1924, it also served as the seat of the last Ottoman Caliph Abdulmecid Efendi. From 1927 to 1949, the palace was used as the office of the Presidency. The Dolmabahce Palace has three major divisions, including, the Imperial Mabeyn (aka State Apartments), Muayede Salon (aka Ceremonial Hall), and the Imperial Harem. The place of utmost importance, the Imperial Mabeyn, was used for administrative purposes of the state, while the Imperial Harem was built for the private life of the sultan and his family members. The section sandwiched between both of these sections, called the Muayede Salon, was used for certain essential ceremonies.

You can enter the palace just by a guided tour with a maximum number of 35 people in a group. The entrance of the tourists is adjacent to the decorative clock tower, a work of the designer Sarkis Balyan. As you enter the palace from the Medhal Salon, you will feel transported to another kingdom; such is the grandeur of the palace. The Crystal Staircase connects the entrance to the upper floor. The library on this floor contains the books of the Caliph Abdulmecid. Featuring Western influences, an ornate imperial gate, and elaborate designs, the palace appeals to the people with aesthetic sense. The wooden floors offer a striking contrast to the stone and brick frame and walls of the building. The palace welcomed modern technology with the installation of the central heating systems and electricity between 1910 and 1912. There are about 44 reception rooms, 285 rooms, and 6 hamams in the grand palace.

As the palace clocks are stopped at 9:05 a.m., the exact time when the former president of Turkey, Mustafa Kemal Atatürk died on November 10, 1938. On your tour of the harem, you will be guided to the small bedroom used by Kemal Atatürk for some days before he died.

The palace also has an outdoor cafe offering vistas of the Bosporus. You can step in if you feel hungry or you can just click some beautiful snapshots.

Tip: The queues in front of the ticket counter can be long. Be prepared for long waiting hours and remember that there is no shade to protect you from the sun.

Where is Dolmabahce Palace ?

The Dolmabahçe Palace is located at a distance of 24.3 km from the Ataturk Airport, Istanbul. You can reach within 35 minutes via the Kennedy Cd route.

Visit the Dolmabahçe Palace early morning, as they allow a limited number of visitors. If the daily quota is met, they close the palace. The best time to visit the palace is the spring season (from April to May) and the autumn season (from September to October).