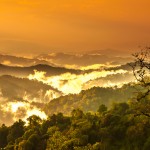 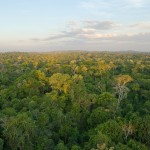 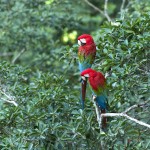 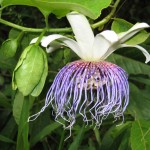 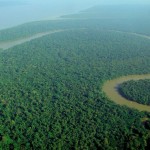 Amazon Rainforest, also known as Amazonia, is an incredibly large ecosystem where nature is at once wild and mysterious. The coffee-colored Amazon River, the second longest river in the world, meanders through the dense foliage of this biggest tropical rainforest in the world. Amazing diversity in wildlife and equally mindboggling variety of landscapes make it a real jewel of South America. Often regarded as ‘The Lungs of the Earth,’ the Rainforest is believed to produce more than 20% of the world’s oxygen.

Recent studies have refuted the claim that the Amazon Rainforest has been in existence for at least 55 million years. They reveal that much of the present area was grassland about 2000 years ago and only after a gradual transition to wetter climate that the rainforests came into existence.

The Stone-age people were arguably the earliest inhabitants of the Amazon Basin, which has been continuously inhabited for at least 10,000 years. Europeans were the first to explore the Amazon in the 16th century. During the 17th and 18th centuries, Portuguese explorers had penetrated deep into the rainforest in pursuit of gold.

Things to Do in Amazon Rainforest

Choose a River Cruise – Navigating the Amazon River and going into the recesses of the forest has a charm of its own. Boating has always been a fascinating way of exploring the wildlife residing close to the river banks. It’s not uncommon to spot giant otters, river dolphins, piranhas and catfishes.

Trek to Waterfalls – Give a refreshing twist to your journey by exploring the waterfalls near the Brazilian town of Presidente Figueiredo. While Sanctuary Waterfalls are too overwhelming, the Iracema Waterfalls are more welcoming. You will have a nice time swimming in the rocky pools beneath the cascade.

Go for Canopy Tours – Climbing on a giant tree like Ceiba and moving from one tree to another via zip lines or ‘rope bridges’ is an exhilarating experience. The journey gives you a bird’s eye view of the forest and an opportunity to encounter rare inhabitants.

Visit the Anavilhanas Archipelago – It is one of the most visited attractions in Amazon Rainforest. Around 400 islands combine to form this archipelago. Birdwatchers and wildlife lovers can let their eyes feast on caimans, pink dolphins, and white-winged potoos.

Enjoy Whitewater Rafting – Apurimac canyon in Peru is one of the best places in the Amazonia to try whitewater rafting. To navigate some intense rapids, Tambopata River could be a worthy choice. Encountering pumas and otters can occasionally could be an added pleasure.

Where is the Amazon Rainforest?

About 60% of the Rainforest is spread across Northwestern Brazil. Almost the whole of Peru and southern Colombia share less than 25% of the area between them. The territory of the Amazon Rainforest extends to Bolivia in the south, Ecuador to its east, Venezuela, Guyana, Suriname, and French Guiana to the north.

By Road – The Bolivian town of Rurrenabaque is the nearest gateway to the Rainforest. Cities such as Belém, Georgetown, Macapá, Paramaribo, Rio Branco, Santa Cruz (Bolivia), and Santarém are the preferred travel bases for those visiting Amazon.

By River – Boats ply from one of the river islands in Brazil – Marajó – to the Rainforest.

When you are visiting the Amazon Rainforest, eco lodges give you the most authentic experience of staying in the midst of wilderness. While most eco lodges have wooden floor and thatched roof, some of them come with modern amenities like flush toilets and Internet lounges. JUMA Lodge in Brazil has equally impressive counterparts in other South American nations. La Selva Amazon Ecolodge & Spa in Ecuador, Refugio Amazonas in Peru, Chalalán Lodge in Bolivia, and Iwokrama in Guyana are some of the popular names. If you are looking for urban accommodations, check in at the Hotel Millennium – Manaus, Caesar Business Manaus, and Hotel Express Vieiralves.

Most of the eco lodges in Amazon Rainforest have onsite restaurants serving authentic Amazonian cuisines dominated by spices such as cinnamon, pepper, and vanilla. Whether you want to try Maniçoba and Tacacá shrimp soup or the Peruvian Tacacho, the restaurants in Iquitos such as Dawn on the Amazon Café, El Sitio, Restaurante Blanquita, and El Mijano offer the best of Amazonian delicacies.

The dry season, which extends from the end of June to December, is the best time to visit the Amazon Rainforest.

The place receives less rainfall that makes it easier to find the walking trials. This is an ideal time for those looking forward to hiking and fishing. The number of mosquitoes also dwindles dramatically.

Moreover, two major festivals take place in June. Manaus city in Brazil hosts the Boi Festival in June. San Juan Festival in the Peruvian city of Iquitos is also a major draw. It is held toward the end of June.