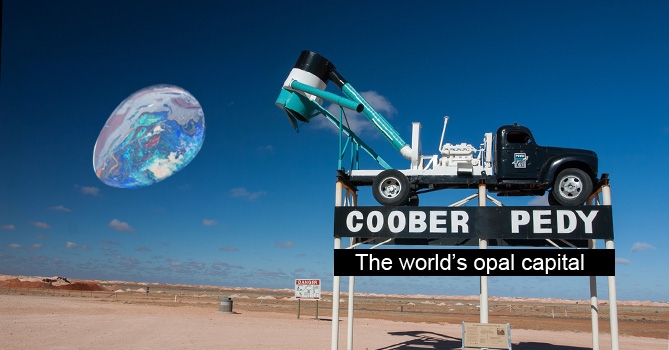 At first glimpse there seems nothing extraordinary about Coober Pedy. In fact, there seems to be not many houses or people; the desert region in which Coober Pedy is located grows excessively hot in summers and bitterly cold in the winters. The town is located in one of the most barren parts of a country otherwise famous for its beaches and greenery. The dusty drive to Coober Pedy from Adelaide or Alice Springs may not feel worth the effort. It certainly does seem to be an ideal place for people to live, much less a travel destination, one would think. The silence and the stillness belie the importance of this South Australian town. Coober Pedy is best known for two things – the gem quality colored opals found here (in abundance) and the underground living facilities fashioned out by the locals (called dugouts). And yes, these are the two reason visitors come to Coober Pedy in hoards each year – fascinated by the ‘gem’ of a town, right in the middle of nowhere.

Opal Capital of the World

Coober Pedy is called the Opal Capital of the World, and with good reason. With over seventy opal fields, the town is the largest opal mining field anywhere across the globe. It is the largest opal supplier of the world. While we are tempted to say that about 85 percent of the opal available in the world comes from Coober Pedy, we must admit that some of it might have been sourced from the nearby Andamooka and Mintabie mines. There is, however, a good likelihood that the last gem quality opal that you came across comes from this sleepy little desert town in Australia.

Geologists believe that about 150 million years ago the region that now covers Coober Pedy was under the ocean. With time, as the waters receded, they left behind a rich deposit of silica minerals mixed with sand. More than the ground itself, the mineral deposits stuck to the rock crevices and cave walls. These solidified over millions of years and turned into the rich colorful opal deposits that now lend Coober Pedy its fame.

How would one imagine that there would be such rich gem deposits in the middle of a desert? Why would one mine here? The discovery of Coober Pedy, rather the discovery of opal in Coober Pedy, was quite a fascinating accident. The Aborigines of Australia who wandered across the Outback had no clue about the wealth and treasures held by the ground they tread. In 1858, John McDouall Stuart, was the first European to explore the region. At about the same time, the hitherto uninteresting Australia started to become one of the major attractions due to the discovery of gold. Gold fever brought with it thousands of prospectors willing to try their luck. In early 1915, Jim Hutchison and his teenage son, along with M McKenzie and PJ Winch formed the New Colorado Prospecting Syndicate and hunted for gold south of the area that now forms Coober Pedy town. While gold remained sadly elusive, the miners still needed water to survive. Hutchison’s son, William wandered in search of water and came across gleaming bits of opal in the rocks. On February 1, 1915, the first opal claim of Coober Pedy was staked.

With the discovery of opal, miners came in hundreds and populated the region. Initially known as Stuart Range Opal Field, the township was renamed Coober Pedy in 1920. The name is a derivation from “kupa piti“, an Aboriginal term for “white man in a pit”. Pretty apt, isn’t it?

Living in the Dugouts

The existence of Opal mines alone may not be enough to attract over a hundred thousand tourists to Coober Pedy each year. There are the “dugouts”. Before you start to imagine dirty miners huddled in dark underground holes (kupa piti) we should tell you that most of the underground residences of Coober Pedy are luxurious houses with living room, many bedrooms, study, kitchen, and entertainment areas. Some even have an indoor swimming pool. And now you start to understand what brings fascinated tourists to this Outback town.

The original miners, troubled by the extreme weather conditions and the inhospitable natural surroundings sought to fashion out a workable living solution. They found it underground, in the opal mines themselves. After having dug out the mines and found the opal, the miners decided to convert these underground structures into comfortable homes. This came with the natural advantage of a controlled temperature – with no need for heating systems or air conditioning! Turns out, this idea is a futuristic one as well. In the age of Global Warming, these underground houses help by reducing the carbon footprints of the residents.

Most of Coober Pedy’s 3,500 (estimate) inhabitants live underground. Yes, there are underground motels for tourists to live in. And shops, art galleries, cafes, museums, and churches making Coober Pedy the most fascinating town you’re likely to visit.

Each year Coober Pedy attracts about 150,000 people – most of them from other parts of Australia, Europe and the Mediterranean. Most of the tourists prefer to drive down from either Adelaide or Alice Springs and sample the great Australian Outback. Some tourists prefer to join the caravans that go from Port Augusta towards Coober Pedy and head further to Alice Springs. If road travel is not your thing, fly down to Coober Pedy on a Rex Airlines flight from Adelaide. Alice Springs is also connected by rail but thereafter visitors will be required to travel by car.

If you thought that despite the opal deposits and the “dugout” living life in Coober Pedy may be dull, think again. Apart from exploring the old mines, you’re sure to be caught up in one of the gala events that keep the town on its toes through the year. An Opal Festival, a Gem Trade Show, an annual ball, numerous races and celebrations – take your pick. Also when in Coober Pedy do not forget to try your hand at fossicking and noodling – trying your luck at finding opals missed by the miners in discarded mullock mounds and old mines.