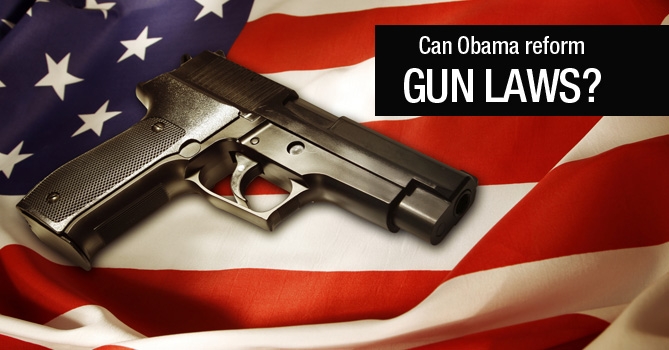 Some 13,286 people were killed in the US by firearms in 2015. There were 372 mass shootings in the US in the same year. It killed 475 people and injured 1,870. The statistics look even scarier when you know that over 300 million guns are circulating in the US waiting to end up in the hands of criminals.
When shootings have become “all too routine”, you can’t blame President Barack Obama for saying, “We’ve become numb to this.” Being the president of a country that loses its citizens more to firearms than terrorism, Obama delivered statements on gun control laws for at least 15 times during his presidency.

The Americans may have fiercely defended their constitutional right to have arms but they haven’t been able to strike a balance between the right to bear arms and the right to live, worship, and gather peacefully. To repeat the cliche, even their gun laws have not been much of a help. If truth be told, the laws are not only ineffective in curbing gun violence, but also appear to be protecting the gun industry.

There are gaping loopholes that allow guns to end up in the hands of mentally ill people and criminals.
It’s outrageous how the law doesn’t impose any obligation on private sellers to do a background check of their customers. A report, which was published almost two decades back, is an eye-opener. It claims that people with criminal intentions don’t buy guns from licensed retail stores. Almost 80 per cent of them bought guns from family, friends, and private sellers.

Ineffective Implementation of Gun Laws and Its Consequences

This mechanism explains how the estranged husband of a spa worker managed to buy a handgun for $500 in the parking lot of a McDonald’s and took revenge on his ex-wife by shooting her and killing others in Wisconsin back in 2012. To be precise, anyone with no criminal history can buy a gun from a licensed store and sell it off to someone who has not undergone a background check.

In fact, the background check system suffers from a chronic problem – gaps in the database of criminal and mental health records maintained by the FBI (Federal Bureau of Investigation). Since it’s the only database that’s consulted during background checks, firearms reached thousands of people who should have been barred.

What makes the problem more confounded is the fact that several states fail to send the government a comprehensive data on individuals with mental illness. A perfect example is the mass shooting at Virginia Tech in 2007. Much before the attack, the gunman was declared mentally ill by a Virginia state judge. However, the record was not sent to the FBI. The same ‘mentally ill’ man passed the background check and bought the weapons. He killed 32 people.

What does Stricter Gun Laws Aim at Achieving?

Failing to convince the Congress to toughen US gun laws and get stronger laws passed, Barack Obama signed an executive order to bypass the political logjam. Recently, the White House issued a press release on executive actions to reduce gun violence. It was emphatic, to say the least. The press release clearly mentioned at the outset that both Obama and Biden “are committed to using every tool at the Administration’s disposal to reduce gun violence.”

Here are some “commonsense executive actions” announced by the US government:

 The Bureau of Alcohol, Tobacco, Firearms and Explosives (ATF) is in the process of finalizing a guideline for sellers to do background checks for people trying to buy weapons through any legal entity.

 The FBI is going for a complete overhaul in its background check system. It improves the process of notifying local authorities when an individual attempts to buy a gun unlawfully.

 The US Attorneys have been advised to direct federal prosecutors to focus on ‘effective enforcement’ of gun laws. Moreover, the government is likely to make a budgetary provision in FY2017 for funding 200 new ATF agents and investigators helping in enforcement of gun laws.

 An Internet Investigation Center has been set up to track illegal online firearms trafficking.

 The Departments of Defense, Justice, and Homeland Security have been asked to “conduct or sponsor research into gun safety technology.”

 The President has asked the departments to do a regular review on the availability of smart gun technology and explore ways to expand its use to improve gun safety.

 While the government has proposed $500-million investment to increase access to mental health care, the work is on progress to remove legal hurdles preventing states from reporting information about individuals barred from possessing a gun for mental health reasons.

Call it a political rivalry or the genuine concern over the potential of the proposed changes by Obama, the Republican leaders were quick to criticize the gun changes as “presidential overreach” and “more show than action.” Some have called this move unconstitutional suggesting that unilateral executive action is not the way forward. “Legislation and consensus is the correct approach”, as one of the senators put it.

According to Republicans, these changes are a last-ditch effort by the Democrats to boost their prospects ahead of the presidential polls. Most of the Republican candidates in presidential race, have also promised to reverse Obama’s actions if they win. Supporters of National Rifle Association must be rubbing their hands in glee.