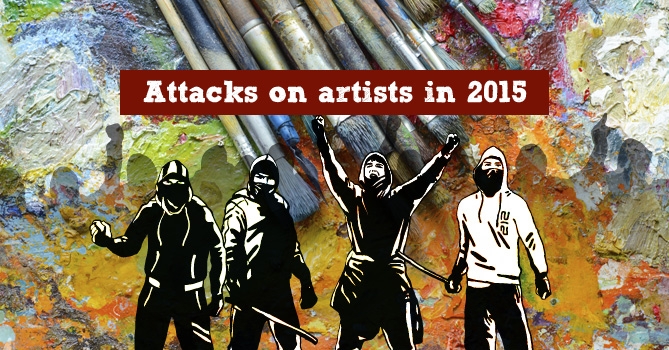 Artists, painters, writers, journalists, and other free thinkers have always been at the forefront of social change and their works have often found political expression. This has led to persecution from those in power or individuals and groups with vested interests, who resent or oppose any form of dissent. The response has been increasing violence against artists in an attempt to curb their artistic expression. Growing intolerance against artistic freedom is a serious threat to the right of expression and 2015 had had its share of attacks.

The most prominent attack on cultural expression came during a music concert at the Bataclan nightclub in Paris in November 2015, when terrorists opened fire at the venue killing over 89 persons and injuring several others. The terrorists specifically chose the musical concert as it was a soft target and would ensure maximum global attention.

This followed an earlier attack in Paris on Charlie Hebdo, a satirical magazine that carried cartoons of the Prophet Muhammad. 12 persons died in the attacks with several others injured. The attack evoked global condemnation and once again raised the issue of Islamic intolerance.

Take the case of attacks against bloggers in Bangladesh. Bangladesh is an evolving society that is trying to give up its repressive past and transition into a liberal society despite strong resistance from Islamists, who believe that Bangladesh should pursue a strict interpretation of Sharia Law as a way of life.

The younger upwardly mobile class of youth resent this and would like to see a more liberal and secular Bangladesh. They found support in bloggers who have been very vocal through their social media expressions and this has been resented by Islamists. The result has been a series of brutal attacks that has ended with bloggers and writers being hacked to death in public places.

India, too, has had its share of attacks on writers for opposing Hindu fundamentalist groups. Several writers with liberal and secular views have been attacked, with some losing their lives. These have included writers like rationalist Narendra Dabholkar and Communist leader and rationalist Govind Pansare, who were shot and killed for their views.

In March 2015, 27-year-old social activist and street performer Kubra Khademi was hounded and almost lynched by the male audience for raising her voice against female sexual harassment in Afghanistan and for wearing steel body armour highlighting her body shape.

Indonesia has been facing its own share of conflict between conservative groups and the liberals. In December 2015, the police in Jakarta banned a scheduled arts festival citing security reasons. The cultural community has been up in arms against the decision.

Syria has been deeply divided on political and sectarian grounds and remains a major security concern for the entire region. In the chaos and violence of daily life, there have been voices that have risen against growing extremism through satirical videos poking fun at groups like the ISIS. The response has been swift with the Islamist fundamentalists hunting for the actors who have now been forced to go into hiding.

Another artist, Nasser al Qasabi, a Saudi Arabian satirist has been receiving death threats after his comedy satire ‘Selfie’ went on air this year. The series pokes fun at ISIS and the response has been swift and ugly. On the positive side, there has been an outpouring of support on social media that wants him to carry on regardless.

Shahin Najafi, an Iranian origin Germany based singer, has had a fatwa issued against him by Grand Ayatollah Nasser Makarem Shirazi calling for Najafi to be killed, apparently on charges of apostacy. In May this year, Aba Shohada, a conservative website announced a cash reward equaling $155,000 to anyone willing to bomb Najafi’s musical concerts.

In November 2015, Lubna Abidar, a Moroccan film actress was attacked and injured by knife-wielding hoodlums in Casablanca who were protesting her role in ‘Zin li Fik’ (Much loved), a film about prostitution in Morocco. She has since fled to France and is now seeking asylum.

On 9 December 2015, the Algerian Army thwarted an attempt by three terrorists to attack the Annaba Theatre that was hosting a program by Cheb Khaled, a popular Rai singer. Over the years, Khaled has received several threats to his life from Islamist fundamentalists but he has continued to perform nevertheless.

Threats and attacks on artistic freedom is not restricted to Asia or the Middle East but is a global phenomenon. In January 2015, the Ramdam Festival of Disturbing Films that was scheduled to be held in the Belgian town of Tourni had to be shut down on account of threat from terrorist attack.

In Sweden, several artists live in constant fear of attacks from extreme right wing and Nazi groups. Nathalia Edenmont is one such artist whose exhibitions have been attacked and lives under constant threat of attack.

In May 2015, 19-year-old Turkish singer Mutlu Kaya was shot in the head and critically injured when an assailant attacked her in her home, ostensibly for participating in a music talent show in Istanbul.

In many countries artists, writers and performers have been standing up to fight against attempts to muzzle their voice and right to expression, and hopefully 2016 will turn out to be a better year.