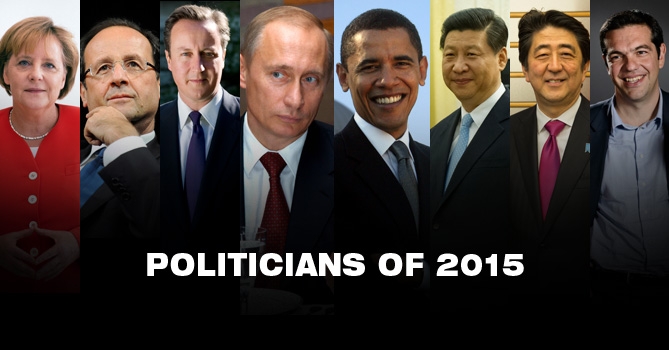 With 2015 drawing to a close, the crisis in the Middle East is gathering most diplomatic and military attention, and therefore, it is natural that the leaders involved in the process will draw more attention. Here are some of the most popular politicians and leaders active in the global community.

French President François Hollande, came to power in 2012 becoming the first leftist candidate in 20 years to be elected President. He defeated Nicolas Sarkozy winning 51.9% votes in his favor. He took office in the closing stages of a global recession and the nation looked up to his leadership to take France on a quick path of recovery. His popularity has since waned and his ratings have been steadily declining. His Socialist Party has lost 13 by-elections in a row and finally managed a win in February this year.

However, his pro-active engagement with the international community on major issues like Iraq, Afghanistan, climate change and G20, makes him one of the most active leaders in the international community. In the aftermath of the Paris attacks, his aggressive response has earned him ratings above 50% from his own people, while his role in trying to resolve the Syrian crisis through military and diplomatic engagement has also been well received, globally.

When Vladimir Putin first took office as President of Russia in 2000, he inherited an economy in crisis. Social order had broken down, law and order barely existed, corruption was high and food prices were spiraling upwards, it was under these challenging circumstances that he won 53% votes.

With the GNI per capita income growing over four times and GDP tripling under his leadership, President Putin continues to receive popular support within his country. The recent annexation of Crimea and his policy towards Ukraine has seen his domestic ratings surge past 70%.

His recent pro-active engagement in breaking the Iran Nuclear deadlock with international agencies has been well received by the international community, and now his decisive action to strike against the ISIS in Syria along with his role in trying to find a political solution to the Syrian crisis, places him high on the list of top international leaders and politicians in 2015.

In 2013, German Chancellor Angela Merkel won a third term in office and in doing so became the only leader to win a re-election since the 2010 euro-crisis, cementing her place in German history as a longstanding popular politician and leader. Under her leadership, Germany has continued to lead the EU through both good and bad times and she has personally been very active within the G20 as also on all popular forums, representing the German voice on all current issues.

Her recent pro-refugee position on Syrian migrants has had opponents and admirers within her own country as also within EU states. 2015 saw her take up a strong position on Iraq, Afghanistan, Syria and also commit her nation in taking the lead to reduce carbon emissions. 2016 should continue to see her take a lead role in engaging with the global community.

Xi Jinping’s elevation to President in March 2013 was a foregone conclusion in the single party elections where he garnered 2952 votes out of a total of 2956 votes, representing 99.86% vote share.

His rise has seen the continuation of policies that were initially established during the time of former President Deng Xiaoping that pursued a strong central authority with liberal economic policies.

Since taking office, XI Jinping has been assertive in international politics, especially on all contentious issues involving territory. On one hand he has taken a strong line against Japan and all those opposing Chinese assertion of territories in South China Sea, while on the other has taken a pragmatic stand, especially with its old rival, Russia, with whom China signed a $400 billion deal.

Under President Xi Jinping, China has expanded its soft diplomacy, especially in Africa where China has committed to invest $50 billion dollars in developing manufacturing and services sector. This is over and above the large scale investment already made.

Xi Jinping is significant in international politics for the economic clout that he represents as also the military power that he represents in influencing global diplomacy. Xi Jinping has refrained from getting directly involved in contentious issues like terrorism in Middle East but is willing to extend China’s involvement in peace keeping operations. He, therefore, makes it to our list of top politicians and leaders.

Any US President should be on the top of a popularity list if international presence were the only criteria, but when popularity in domestic politics is also a parameter, the US President does not always score high. Same is true for President Barack Obama.

He has been popular for seeking faster withdrawal of US forces from Iraq and Afghanistan and also for reopening of dialogue with Iran. His role in trying to mediate peace in the Middle East is commendable; however, not all his policies have been well received within his own country.

He has failed to get many of his domestic policy initiatives passed by Senate, where he continues to face stiff resistance from Republicans. As a result, his domestic ratings have been falling at home. It remains to be seen whether he will be able to push through some of his Bills before he finally leaves office.

Japanese Prime Minister Shinzo Abe led his party to a majority, winning 325 of the 475 seats in the House of Representatives, demonstrating people’s confidence in his ‘Abenomics’.

While his economic policies have been largely welcomed, his recent decision to open up the Japanese economy for defense production and export, along with international deployment of Japanese forces, has met with stiff resistance from citizens that want Japan to continue with its existing pacifist policies. In September 2015, his popularity ratings had dropped to 38.9% but his decision to stand up to China’s rising dominance over the South and East China Sea still keeps him popular.

Alexis Tsipras became the youngest Prime Minister in Greece when he led the leftist party SYRIZA, to victory in a snap general elections held in January 2015.  When Tsipras took over power in Greece, the nation was on the brink of a major financial collapse, with EU, IMF and the Juncker Commission putting Greece under pressure to accept reforms as a pre-condition to bailout package.

Tsipras was in a tough situation since he was voted into power on the back of his anti-austerity stand and yet he had to find a way to access the bailout package as the only way to save Greece from a total financial collapse and subsequent exit from the EU.

To his credit, Tsipras did show political pragmatism along with retaining nationalist pride by mostly accepting the tough conditions of the lenders. But he also faced internal party revolt, and by September 2015, was forced to resign. In a move, which is a hallmark of a seasoned politician, he called for snap elections. He was voted back into office and has subsequently negotiated a bailout package for his country despite severe opposition within his country.

He continues his attempt to bring stability to the Greek economy while trying to keep opposition parties in check, earning respect of the international community and making it to our list of top international politicians.

The British Prime Minister led his Conservative Party to a surprising majority that cemented his party’s position in the House of Commons. Though visible in international forums, David Cameron has seen his domestic ratings fall in the UK. He has not been able to come out of the US shadow in international politics and is widely seen to be toeing the US line whether in Iraq, Afghanistan or Syria. It remains to be seen how his latest decision to bomb ISIS in Syria is received by voters back home.

Narendra Modi surprised many in India when he led his party to massive victory in the 2014 General elections. Ever since, he has emerged as one of the most internationally followed leaders as he attempts to bridge India’s economic gap with the developed world.

For someone who was little known politically outside his home state, Narendra Modi has been able to offer hope to aspiring youth in India that the country was on the cusp of accelerated development and there was tremendous opportunity for all, within India.

The PM has been actively engaging with India’s smaller neighbors as well as developed powers in trying to woo investment into the country. His high-profile visits to countries and his ability to invoke patriotic sentiments within the Indian diaspora saw him being nominated for Person of the Year Award by Time Magazine. The award eventually went to Angela Merkel of Germany but Narendra Modi had announced his arrival.

Born in December 1971, Justin Trudeau became the second youngest Prime Minister of Canada at the age of 43, when he lead his Liberal Party to a dramatic win this year. Eldest son of former Prime Minister Pierre Trudeau, Justin preferred to stay away from politics and worked as a teacher.

He caught public attention when he delivered an impressive eulogy at his father’s funeral. Winning a Liberal Party nomination in 2007, he got elected as MP in 2008 and re-elected in 2011. In 2013, he was elected to head the Liberal Party and in 2015 became Prime Minister of Canada.

He makes the list of Top Politicians as he represents an economic powerhouse in Canada and for his role in shaping Canada’s policy in international affairs. His recent statements have re-affirmed his views on a moderate approach to Canada’s engagement in fighting ISIL, as also towards the Muslim community in general, by recognizing their right to wear the Hijab in public places, including public servants. His recent statement on bridging the gap between Aboriginals of Canada and mainstream citizens have been widely welcomed. He will continue to be a closely followed leader through 2016.