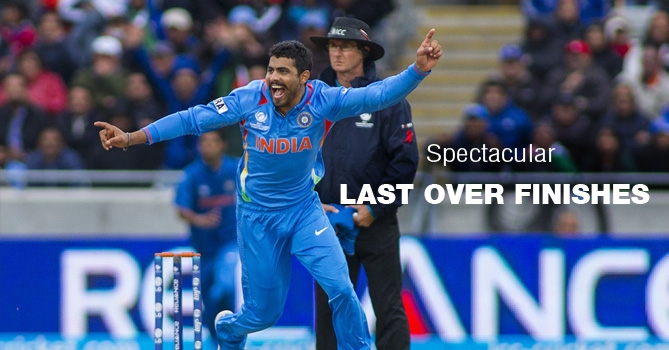 Traditionally, the 50 over World Cups have had the best last-over finishes. The reason is simple. It is a prestigious event and no one wants to lose here. Coming to incredible finishes, the first name on the list is the game between Australia and South Africa in the semi-final of the 1999 World Cup, played at Edgbaston. Batting first, Australia had scored 213 and reduced the Proteas to 61 for 4. However, they recovered fast due to the cavalier efforts of Mark Boucher and Shaun Pollock, who had taken a fifer earlier in the match, and then some lusty hitting by Lance Klusener, who had already acquired some reputation in the tournament for being a bludgeoner par excellence.

Up till then Shane Warne had been the wrecker-in-chief with 4 for 29. In the last over, South Africa needed nine runs to clinch the game and the murderous mood that Klusener was in, it did not seem beyond their capabilities. However, Damien Fleming, who was bowling the last over held his nerve and delivered a series of yorkers to keep Klusener down. In the end the pressure got to the Proteas batsmen and resulted in a run-out that tied the match. Australia had already won the Super Six encounter between both the teams and by virtue of that, it progressed to the finals.

From the look of it, there is something between South Africa and World Cups. They always lose matches from winning positions. In fact, they have made a habit of this. In the above mentioned game as well – hosted in its home turf – the Proteas were in a position to win. Before this game, they required a win to progress to the Super Sixes. Batting first at Durban, Sri Lanka scored 268 thanks to Marvan Atapattu, who scored a century, and Aravinda de Silva who managed 73. When South Africa batted they knew a storm was coming and they had to be at par with the Duckworth Lewis score.

Just before rain stopped play South Africa had scored 229 thanks to the efforts of Klusener and Boucher. The batsmen were under the impression that it was enough to guarantee their passage to the next round and celebrated with the crowd as well. However, it was one short of the par score. The match was tied owing to rain and it left the hosts high and dry once again.

This was the first match for Ireland in the World Cup. However, the fact that they were able to defeat a test team only made it even more special. The game was played at Kingston, Barbados. Batting first, Australian-origin player Jeremy Bray hammered a century to help Ireland score 221. However, Stuart Matsikenyeri and Vusi Sibanda scored fifties and helped their team off to a good start. In the end it came down to 19 runs from 39 balls, quite gettable in any situation. However, the Irish held their composure and affected three run-outs in the last couple of overs to force a tie that seemed unlikely.

Played at Bengaluru, this game remains one of the most exciting matches played in all the World Cups. India put up an imposing total of 338. However, Andrew Strauss, the English captain had other ideas. The normally-dour batsman scored 158 to help his team stay on course. In the last couple of overs, England still needed 29 runs. It was nearly unachievable but England almost managed it thanks to Graeme Swann, Ajmal Shahzad, and Tim Bresnan who hammed sixes to leave the equation at two runs from the last ball. However, they could only manage a single and the game ended in a tie.

This was only the first time that the World Cup was being staged in the Indian subcontinent and it was the second day of the tournament that saw titleholders and favorites Australia pitted against India, a promising yet unfancied team. Australia batted first and got to 270 for 6 wickets thanks to Geoff Marsh, who got a century and David Boon, who scored 49. India was cruising with 207 for 3 but then Craig McDermott (4-56) struck and the team was bowled out for 269 in the penultimate ball of the innings.

Following are some other incredible last over finishes in one-day cricket: