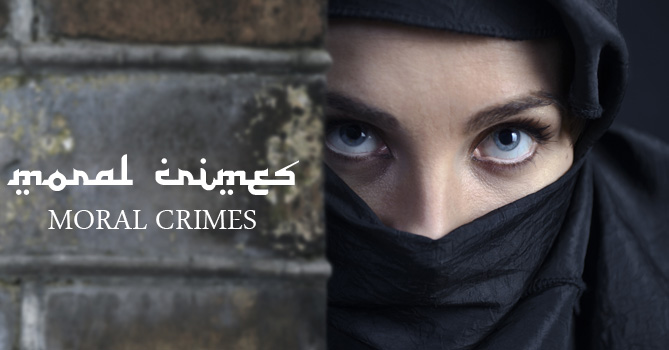 Moral crimes against women have existed through time in several parts of the world. The problem with moral crimes is that it has different interpretations in different societies, where a thin line divides what is acceptable and what is condemnable. Either ways, victims are mostly girls or women, while in some cases, it involves boys, men and trans genders.

What constitutes a moral crime?

While its interpretation varies within different Islamic countries, any non-conforming act is viewed as anti-society and hence, anti-Islamic. Adultery, pre-marital-sex, pre-marital pregnancy, socializing or fraternizing between sexes, gay or lesbian sex, consumption of alcohol, women steeping out without a veil, women stepping out without an accompanying male member, public display of affection, listening to music in public or even laughing in public, etc all comprise moral crimes with varying degree of punishment based on interpretation of each society or country.

Women have always been at the receiving end of social laws that have been established by men, and these laws have often been used to justify what would be defined as an outright crime in most civilized societies. Take for instance, the situation prevailing in Afghanistan, a country that has either no law or regressive interpretation of law that weighs heavily against women.

Several cases have been reported in the last decade post 9/11 attack, where girls and women have been subjected to molestation and rape. In the rare case of a girl or woman reporting the violence in a police station, the victim has been arrested for being immoral and for not being accompanied by a male family member.

The case of Gulnaz is an example of regressive interpretation of law. In 2012, Kimberley Motley, an American lawyer practicing in the United States and Afghanistan took up the case of Gulnaz, who was a victim of rape. When she went to the police station accompanied by her disabled mother to report the crime, she was imprisoned for not being accompanied by a male member. She eventually gave birth to a child in jail and was released only after Kimberley Motley took up her case at the highest level. Gulnaz was lucky unlike several other women who are still languishing in various jails of Afghanistan.

But this is by no means restricted only to Afghanistan. Death by stoning for cases of adultery is common in many Islamic countries. Public show of affection such as holding of hands or stepping out of the house unaccompanied by a male member attracts severe punishment in countries like Saudi Arabia where women are prohibited from driving a car, an act punishable under Sharia law. In countries like Saudi Arabia and Iran, there is a dedicated moral police that looks at enforcing morality, as they see it, in public life.

But what is not permissible in one country, finds greater levels of acceptance in other Islamic countries. Countries like Pakistan, Bangladesh, Malaysia and Egypt are relatively more progressive where women enjoy greater freedom in certain aspects of life. Even in these countries, the degree of enforcement of moral policing differs between urban and rural areas.

Due to the nature of the problem, most cases go unreported, especially in places like Afghanistan, Saudi Arabia, Iran, Somalia and the Central African Republic (C.A.R). Sexual assault taking place within the family almost always goes unreported due to the social stigma attached. And in rare cases that do get reported, the law often faults the victim for having loose character and is offered the option to marry the aggressor to settle the matter.

Moral crimes are slightly different from sexual crimes in conflict zones. Many areas that fall under conflict zones have witnessed extensive sexual violence against both women and men, including young girls and boys. In recent years, fighters under the ISIS banner have been committing all kinds of crimes against women across Kurdish areas, Iraq, and Syria. The victims, from both sexes, have little recourse to justice.

Sexual crimes against women and children

United Nations Assistance Mission for Afghanistan (UNAMA) reported 44 cases of sexual violence against women between January and December 2014. 8 cases against children were also reported during the same period.

2,527 cases were reported against women, boys and girls.

United Nations Assistance Mission in Iraq (UNAMI) reported that by November 2014, 2,500 women and children were held captive by ISIS fighters and subject to varying degrees of sexual violence and included members of the Yezidi, Christian, Shabak and Turkomen communities.

There were 90 cases of sexual-related assaults, 69 rapes and 21 other sexual assaults.

Between January and August 2014, 2,891 cases of gender-based violence were reported.

236 cases were reported and include sexual violence against 116 minors

Several cases of sexually-related crimes against women have been taking place in conflict areas of Syrian Arab Republic and Yemen but these are difficult to record and verify.