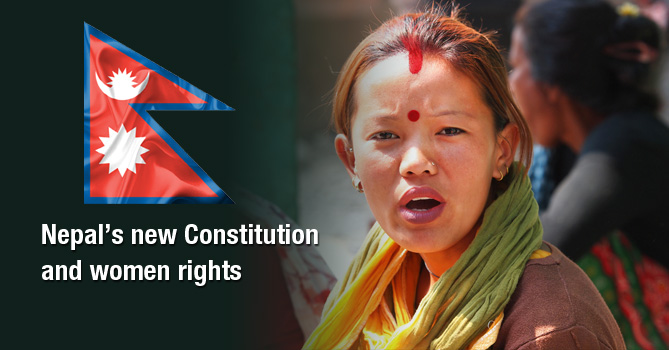 After seven long years at the drafting table, Nepal finally adopted a new constitution earlier in October 2015. In 2006, this small Himalayan country made a bold move by overthrowing its centuries old monarchy and adopting democratic governance. Ever since, a new constitutional document has been in the works. It was initially anticipated that this constitution would take about two years to be drafted and adopted. It took seven additional torrid years of contentious debate and furor for the legislators to come to an agreement and finally ratify the country’s repository of laws. While the new constitution had a clear purpose – to enshrine equality to all and protection to the neglected classes including that of the LGBT community – it became clear that women, the traditionally marginalized community, would not get the protection that they sought out of the law. Mass protests were organized and finally some consensus reached about women’s rights in the nation.

Why is it Controversial?

Nepal has traditionally been a very fragmented and divided nation. Numerous languages, cultures, castes, and communities live in this country and many of them are embroiled in a conflict of interests. In an attempt to solidify the united foundations of the nation, the new constitution attempts to provide the country a federal structure with seven administrative regions. A number of communities, in fear of being marginalized by this attempt, broke out in protest. Over 40 people were killed in the protests over the various articles of the draft constitution. Another major concern that had brought the new constitution under fire in the Constituent Assembly was the issue of women’s rights.

Prior to the implementation of the new constitution, the legal rights of women in the country were largely curtailed. A popular Nepali adage says, “Women have no caste”. This refers to the Hindu belief that a woman is her father’s property prior to marriage and her husband’s thereafter. Women were not allowed to inherit parental wealth. Most of them were dissuaded from running for public offices. The matter of women’s citizenship has traditionally been a much-debated and contentious issue in Nepal. The old constitutions and civil code of the country did not allow a woman to pass on or confer her citizenship to her children. This means that children born to a Nepali mother would not be natural Nepali citizens. Despite the country’s ratification of the United Nations Convention for the Elimination of All Forms of Discrimination Against Women, the ground reality (at least in matters of citizenship) in the country has been very torturous for women.

On September 16, when the Constituent Assembly of Nepal ratified its latest constitution, it seemed that the last hopes of the thousands of women who had been protesting, rallying, and campaigning were dashed. The new constitution, once again, does not allow a woman to confer her children with her national identity, independent of her husband. This means that the children of a Nepali woman married to a foreigner will not be natural citizens of Nepal, whereas a Nepali man who marries a foreigner will beget children who are natural-born Nepali citizens. Children of single mothers in Nepal will now lack a national identity. It is expected that this will result in hundreds and thousands of stateless people in the country. According to news reports, only 26 other countries in the world confer unequal citizenship rights to men and women.

When the matter of drafting a new constitution came up, Nepali women were up in arms against the Constituent Assembly, fearing that the male-dominated body would do little to change the long oppressed gender in the country. By the time the constitution was ratified, however, women campaigners had managed to secure a great deal in terms of representation. The new constitutional document holds that it is mandatory for a third of the members of parliament in this country to be women. With about 33 percent women legislators, Nepal may now look forward to greater protection for its womenfolk. Onsari Gharti Magar, was elected as the country’s first woman speaker (of Parliament) soon after the constitution was adopted (October 2015).

On October 29, 2015, the Himalayan nation of Nepal got its first woman President, Bidhya Devi Bhandari. The move is viewed as a great stride in achieving gender equality in public life and politics. Prior to her election as President, Bhandari had held the office of Vice Chairperson of the Communist Party of Nepal (Unified Marxist-Leninist). She is also a well-known champion of women’s rights in the country. She spent the last few years campaigning – first for the establishment of democracy in the country, and then for the new constitution to protect women’s rights in the country.

For the past few years, Bhandari has been actively campaigning for a mandatory inclusion of a woman either to the office of the President or Vice President of the country. Bhandari takes over from the country’s first president, Ram Baran Yadav who came to hold the office in 2008. Although the position of the Nepali President seems to be largely ceremonial under the new constitution, it is expected that Bhandari’s election to the position will provide the necessary inspiration to other Nepali women who aspire to join public offices. It is also seen as a major step for Nepal in correcting the major gender inequality concerns in the country.

Women’s empowerment and awareness creation is an area where much needs to be done in Nepal. With the issue of citizenship now out of hand, women’s rights activists fear that the country’s women may start to lose a number of the rights they have fought hard to secure. Woman’s education, selective sex abortions, position of women in the household and society, and women’s health are issues that need to be worked upon by the nation in unanimity. One can only hope that the opening up of public offices, the legislature and such positions helps the Nepali woman to step out of the household and reclaim her rightful position in society.