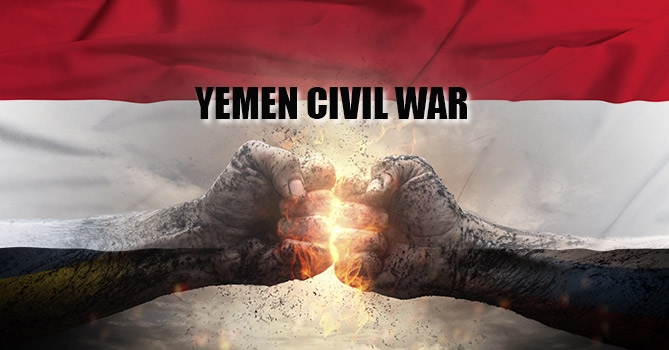 Yemen is located on the Bab al-Mandab strait that connects the Gulf of Aden with the Red Sea. The location is of strategic importance since a large part of global shipping passes through this strait, which lies on the southern side of Yemen. On the north side, Yemen shares an extended border with Saudi Arabia and access to some of the largest reserves of crude oil.

For many years, the region comprised two countries; Yemen Arab Republic (YAR) in the north and People’s Democratic Republic of Yemen (PDRY) that controlled the south side. It was only in 1990 that both countries decided to unite to form the Republic of Yemen, with Sanaa as its capital.

The unity was short lived, as the Sunnis, who lived mostly in the south of Yemen, began to protest against Shia-led dominance of government and economy. In 1994, the Sunnis rebelled against the Shia dominated north but it was short-lived. The dislike and distrust against the north remained.

The Houthis, who live mostly in the north side of Yemen, are a sect of Shia Islam called Zaidi. The Zaidis form one third of the total population. The name ‘Houthi’ comes from their popular leader Badr al-Din al-Houthi, who led a rebellion in 2004 against the Sunnis, to protect and preserve the Zaidi culture and way of life. On the political side, he demanded greater autonomy for Saada province that was home to most Zaidis. In a military response to his rebellion, Badr al-Din al-Houthi was killed the same year.

Remaining members of his family and close associates then initiated a series of attacks against the government which continued till 2010, when a ceasefire agreement was finally negotiated with the government.

Peace was short-lived and in 2011, people began to protest against the rule of President Abdullah Saleh and demanded he step down. Houthi leader Abdul-Malik al-Houthi joined the protests against President Saleh.

As clashes grew in number and level of violence escalated, the Houthis lay siege to a Sunni dominated village in Dammaj, North Yemen. This was the first move by the Houthis towards claiming full autonomy for Saada and Amran province.

In early 2012, Abd Rabbu Mansour Hadi was elected President in a single candidate election for a period of two years, which the Houthis boycotted. President Hadi tried to negotiate peace between warring factions by organizing the National Conference Dialogue (NDC) and by February 2014, President Hadi announced plans to convert Yemen into a federation comprising six regions. The Houthis opposed the plan as they feared dilution in their power and identity.

Meanwhile, increased clashes were taking place between the Houthis and various Sunni tribes of the north. The clashes soon spread to all parts of Saada province and beyond. By mid-2014, the Houthis took on the Yemen Armed forces and soon took control of the capital Sanaa. President Hadi was forced to flee Sanaa and took shelter overseas.

The fighting soon spread to other regions with Houthis gaining control over most territories including Taiz, Lahij, Mocha, Zinjibar, and Ataq. As the Houthi fighters reached the doorstep of Aden in the South and towards Marib in the east, Saudi Arabia entered the conflict with support from a coalition of countries that included Kuwait, Qatar, Bahrain, UAE, Jordan, Egypt, Morocco, Senegal, Sudan and Malaysia. The U.S., UK, France, and Turkey provide outside support.

Towards the latter part of 2014, a new al-Qaeda backed group called the al-Qaeda in the Arabian Peninsula (AQAP) entered the conflict with the objective of creating a larger Islamic state. This was in addition to the various tribal militias already engaged in supporting either the Houthis or the Saudi-backed fighters.

The Houthis have been funded, equipped and supported mostly by Iran, with support from Russia. Iran, Russia and China have been opposing military intervention by foreign forces in Yemen.

Since March this year, over 5,400 people have been killed, with over 1.5 million people displaced. The conflict has led to a total breakdown in administration and civil services. The medical infrastructure has mostly collapsed and only basic services are being provided by Doctors Without Borders (MSF), a charitable international organization.

In the recent attack on the southern city of Taiz, over 1,300 civilians, including 198 children have been killed, with over 6,000 seriously injured, including 641 children. Food, water and medical supplies are running low and the situation has turned critical. Similar situation exists in most other parts as well.

Hope for a negotiated settlement

For the first time, Saudi Arabia has accepted Iran’s participation in discussing both Syria and Yemen. With active back channel diplomacy involving the U.S., Russia, UK and the EU, all sides have expressed a willingness to talk further towards a negotiated settlement. All sides involved in the conflict are due to meet at Vienna and sit together along with representatives from the U.S., Russia, EU, Saudi Arabia, Iran, Turkey, Egypt, Jordan and Lebanon, to try and find a solution to the present crisis.

The talks are important and could have an impact on the ongoing talks to resolve the Syrian crisis.